“Climb a beautiful mountain for me.”

I set out early and found that the sun was already risen and over the far ridge by the time I got out onto the trail.  Although I had passed the trail-head probably half a dozen times or more, I had never been this particular way before.  A steep path and rocks and scrub oak with their tiny, shiny acorns greeted me and caused me to wonder at the endurance that I had only a few weeks ago when I could and would play racquetball for three hours at a time.  The intense climbing soon had my lungs and legs burning as I continued up the trail.  Above and beyond me, the foothills and mountains rose in their way, causing a beautiful backdrop of scenery for my hike. 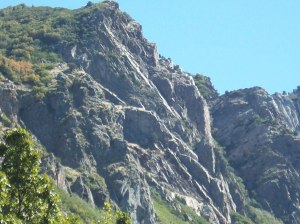 By the time I seriously needed a breather and had reached a relatively flat stretch in the trail, I came across and older man who was also catching his breath and admiring the view.  We greeted each other cheerfully and commented on the hike and the scenery.  He asked me how far I was going and I responded that I didn’t know yet.  I’d never been on the trail before, I told him, so I was just going to walk until I needed to come back.  We stood there for another five minutes or so as he told me the names of the reservoirs I would encounter on the trail, which way to turn if I wanted to go to such and such a place, etc.  After another couple of minutes of talking about the area and the trail, he introduced himself to me by name and said it was nice to meet me…on a hike out on a trail in the middle of nowhere.  Welcome to Utah. 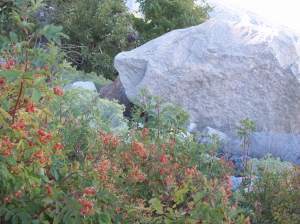 We parted ways and I continued on my morning hike.  I soon found the first reservoir the man had mentioned and took the easternmost trail that skirted the lake and was up against the gaining mountain.  I sloshed through the soggy, rich black earth and new grass and then found the dirt and rocky trail that led off and into the forested heights onto and along the mountain. 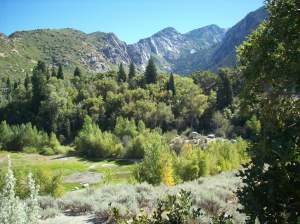 As I marched up and down the trails and looked at the hills and mountains around me, always searching for a good spot for a photo, I thought about my life and family and choices and preparations and how I would share with my Little One how to find the words to describe his feelings when he was alone or amazed or overwhelmed by whatever life was bringing him. 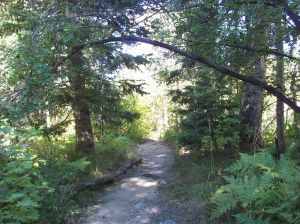 I thought about perspective and problems and turmoil and how the squirrels left behind a pile of shredded leaves and husks after they got the seeds out of a pine-cone.  I pondered the folding of the mountains into cups and ridges and rocky slabbed sides on their ever reaching heights.  I thought about pleasures in life that remain and don’t, about what today is and has been in the past several years, and about what the future holds for me and my family.  I thought of those words again that I’d share with my Little One that come from the core of our being and know pain and suffering and joy like the heights of these mountains, of a close communing with the heart of a loved one, and the peace that comes sometimes when looking out over mountain ranges that help define perspective.

And then I remembered the words of a friend of mine when he said, “Climb a beautiful mountain for me.”  Here you are, Sir Byron.  And thank you. 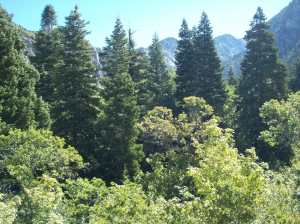 This entry was posted on September 11, 2010 by seekraz. It was filed under From Somewhere Inside, I Was There, Photos - Outdoors and was tagged with escape, family, friendship, hope, life, love, memory, peace, Utah, wonder.