Several years ago, a friend asked me to write something about my thoughts and feelings pertaining to the transition from employee to supervisor within our workplace, from 9-1-1 operator and dispatcher to Radio Supervisor.  When contemplating the paper, I thought I would discuss the relationships with my immediate co-workers, the relationships with peer supervisors from other shifts, the relationship with my supervisor, the aspects of the performance of my job that my supervisor evaluated, the relationships that I had with my employees and the employees of other supervisors, both on my shift and other shifts, and related to and intertwined with all of the above, the political nature of written communication, things said and/or not said, actual and implied or perceived intent, and the ever-present need to actually consider and weigh one’s reaction to any other word, intent, omission, look, possibility, idea, etc..

After discussing the changes in relationships and interactions with all of the people in the workplace, and when considering those changes, there was also the immediately personal aspect to look at – my evaluation of myself inside myself, the changes in my thought processes that included moving from a solitary person to one of community and all that it entailed, i.e., what I lost and gained, etc.  And then more – my thoughts of the bureau, the department, the officers, the citizens; my responsibilities to my co-workers, my employees, my boss, the department, the citizens; how my perspective of liability had changed or remained the same; my dedication to the job; my thoughts of other people’s dedication to the job; my sense of belonging and not belonging; it was just a job, a means to a nice paycheck that provided for my family and the commitment I had to making sure I deserved what the city gave me for compensation;  and then my occasional thoughts of demoting, or other thoughts of trying for another promotion where I would supervise my then co-worker supervisors.

All of that processing of my transition within that particular workplace got my mind going in similar yet unassociated areas and caused me to wonder about the different and many transitions that one undergoes in a lifetime – which I then applied to myself and the many aspects and experiences of my own existence that have led me from one place to another, both literally and figuratively.  My mind went in directions ranging from being an innocent in every sense of the word and passing into and through the stages of gaining knowledge that removed the innocence and replaced it with experiences that changed me forever, even if only in the slightest ways.  My thoughts wandered, then and now – if I’m going to have this current and up-to-date, down the trails of my childhood turning into adolescence and adulthood; the paths that led me from the Air Force to the health department, from the health department to the police department, and from there to my present workplace in another health department in an altogether different state and locale; from carelessness to concern, or selfishness to awareness; the journey from being a solitary person, as I mentioned earlier, to one who out of necessity or yearning became one of community with a participatory audience, be it large or small; the change from being a young father with little children to being an older father with young and older children; from being a Believer to being a non-believer or disbeliever…and….  So I wondered at change and transition.

And then a friend of mine sent me a link to another article about a man who tossed caution to the wind and left his steady and secure job that paid well, but wasn’t fulfilling, and bought a boat and started a charter business and sailing school…and changed his life.  He left the security for something he loved, something that spoke to or moved his “soul” or the core of his being.  And I thought of transitions again and still.  I thought of how I have done something similar to the guy who “quit” his former job and bought a boat so he could pursue his dreams, however unsteady they might have been.  I thought of pursuing a simpler life, one less complicated, without and within, one that was rewarding and fulfilling and wrought with a different and compelling potential that didn’t exist in another place, for me and mine, anyway.  I thought of how making that change will cause other transitions to occur within me as so many transitions and changes were occurring outwardly in my life.

Yes, I’ve only been there for a few weeks, but I actually look forward to going to work in the morning.  I also look forward to waking and seeing that big beautiful mountain down at the end of my street, knowing that at the end of my work week, or even some afternoon after work, I will be out there driving or hiking among its hills and valleys, listening to its streams trickling or rumbling over its rocks, and hearing its scolding squirrels and singing birds touching the otherwise quiet and clean forest air.  No…the monetary rewards won’t be there at work; I’m not going to be rich or even “well-to-do” after working there…but then I don’t have dreams of making millions.  I’m looking for peace that lives within.

So the other day, when I was in the turn-lane to merge into the lane of traffic that was going to take me out and into Mill Creek Canyon, I suddenly saw and heard, racing toward me, three police cars in a line with their lights and sirens going full blast, “Code-3,” with a fourth one coming a minute or so later, flying so fast that they shook my truck in their passing.  In my mind, and in my memory that has formed over the past eleven years, that many cops heading in the same direction, so close together, with lights and sirens screaming and blaring, could only mean one thing…someone got shot…some police officer got shot and the others were driving there as quickly as they could so they could render aid and catch the bad-guy.  My heart nearly jumped out of my chest. 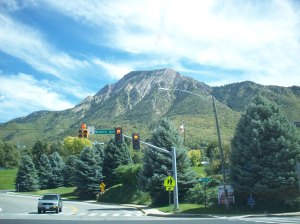 The view of the big beautiful mountain in front of me was suddenly absent as my former life and concerns came crashing and screaming into my very real and present and different life.  I almost went back to my apartment to await the news flash on the television.  But, I didn’t.  I did, however, ask the mountain “Why?” and then sat there for another half-minute or so before venturing out into the traffic on the road that would take me away from my immediate concern and anxiety and out into the green embrace of that lush and welcoming “other world” that exists a few miles down the road from the everyday.  I did watch the news that night, which I normally don’t do…and…regarding all the cops in a line with their lights and sirens and my imagined tragedy that struck or befell those brothers in blue…nothing.  It was a “Big Fat Numba-Three.”

And today, with the “new employee” orientation that touched on emergency preparedness and the talk of 800MHz radios and interoperability and incident command and chain-of-command and what if our cell-phones won’t work and the radio towers are down and they’ve got two new fancy trucks with mobile antennas for the radios and stored rations and a cache of this and a cache of that and a 72-hour kit and we need to get help to those in need and 9-1-1 will be out of business and so will we and…and…what does all of this have to do with gonorrhea?

So…I am still somewhere in-between the past and the present, the “used-to-be” and the “is.”