So I stopped along the trail on the way back, as my stomach was growling and it was 11:40.  I had only had two cups of coffee and a granola bar so far for the day, so I was hungry.  As I sat there along the trail, I started to hear voices off in the distance, nothing real clear, just occasional sounds coming through the trees, human voice sounds, higher pitched to carry through the thin air and bounce long and forever off rocks and clefts and out into the never.  I looked around and saw a scree field just to the left of the trail, rather, on the side of the ridge that is facing me, but I am far to the right of the trail that I mentioned, and up on the ridge to the right.

So, I could see it there, the scree field that is situated on the ridge or side of the mountain that is to the left of the trail as one is hiking up to the Red Pine Lakes.

That particular spot is just past the marker that lets you know that you’ve come two and a half miles from the parking lot and still have a mile to go to the lake.  At that small junction, there is a bridge on your right.

If you cross it, and then follow the trail, you will find yourself at the lowest of three lakes that are situated in Maybird Gulch, which is located in the greater Little Cottonwood Canyon area that is just south and east of Salt Lake City.

So, there I was, 40 minutes back down the trail from the lowest lake and I heard the first voices that I had heard since I got out of my truck at 7:25 that morning and said “Hey” to another person in the parking lot.  There had been no other voices, no other footsteps along the rock trail, and the pine-needle-covered trail, and the crusted-snow crunching trail that I had followed so far. 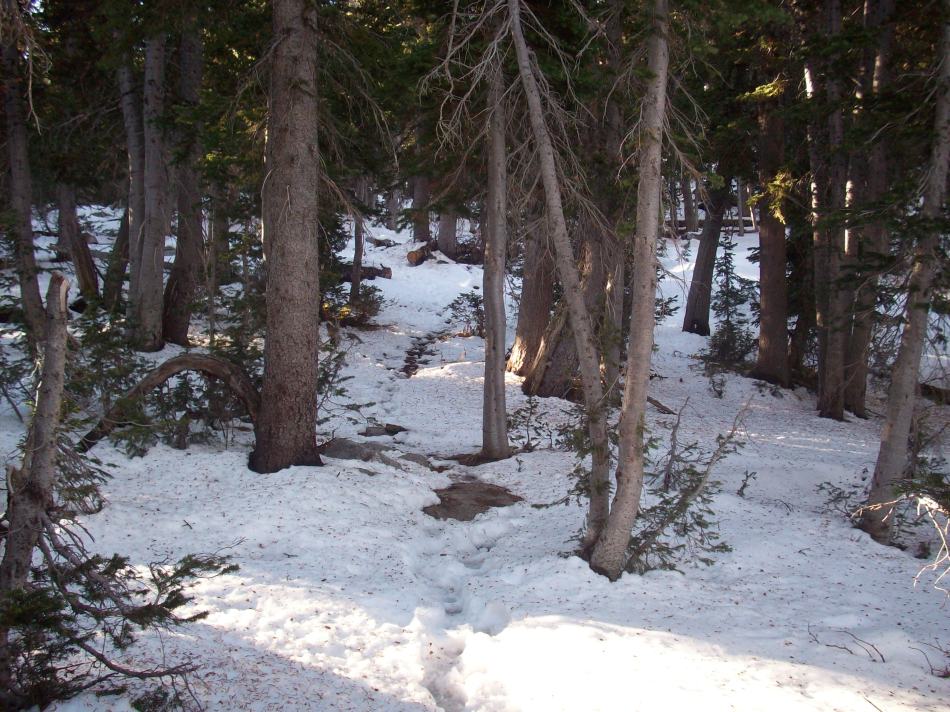 As I sat there eating my granola bar and apple, I looked around at what was my company, what would be my company for another two and a half to three miles before I got back to my truck.  It would be at least another week before I could be out there again in that natural haven against life and traffic and taxes.

As I was sitting there, a group of hikers came down from the trail behind me; they had spent the night up in Maybird Gulch, exploring around the two lower lakes, and after they walked past and said “Goodbye,” another couple came up the trail, said “Hello,” and kept going…and then it was quiet again. 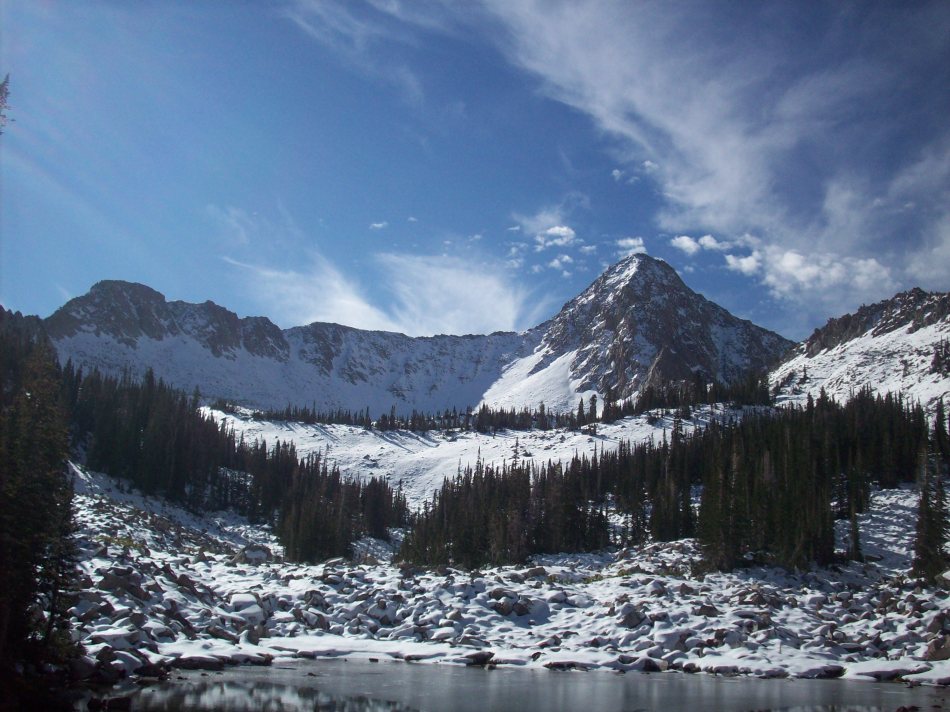 The wind was blowing through the tall white-pine trees and I could hear the stream that ran along the trail that I would soon be on again, the trail that leads to and from Red Pine Lakes.

There were white granite rocks and chunks scattered throughout the forest around me, and yellowed and mashed leaves that, only weeks ago and before our first mountain snow, were broad and shiny and green.

There were also patches of the beautiful and cold and white stuff around me, and pine cones and needles and broken branches from the trees above me and the dead and decaying ones that lay akimbo and everywhere, some thin, some larger, some across the trail that have been cut to allow hikers’ passage, and others, of course, out there and everywhere around me, shiny gray and silver branches and trunks, old rotting logs that were huge trees those years ago,  and were then and now turning into forest mulch and home for bugs and moss and that little green something that sometimes covers the ground-side of old and fallen trees. 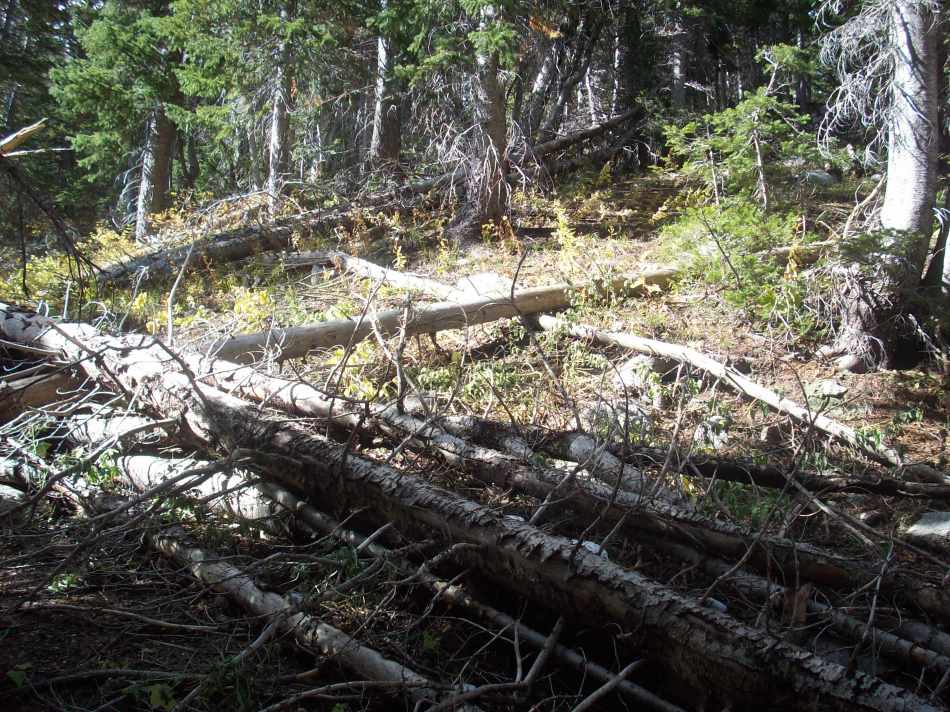 Off to my left, which was north, I could see the caps of darker red rock that lined and lines the top of the white granite mountain that is the northern ridge and side along Little Cottonwood Canyon; it is called Dromedary Ridge for the camel-like peaks that run the length of that stretch of four or five miles of the canyon walls.

As I continued to sit there, I noticed again that my toes were cold from the snow that had melted down into my boots and had soaked my socks, and my fingers were chilled as I wrote with pencil in this little notebook as the stream still went and rumbled and the wind still blew lightly through the trees over and around me…and it was time to go.  I would have loved to go up that last mile to the Red Pine Lakes and see them again. 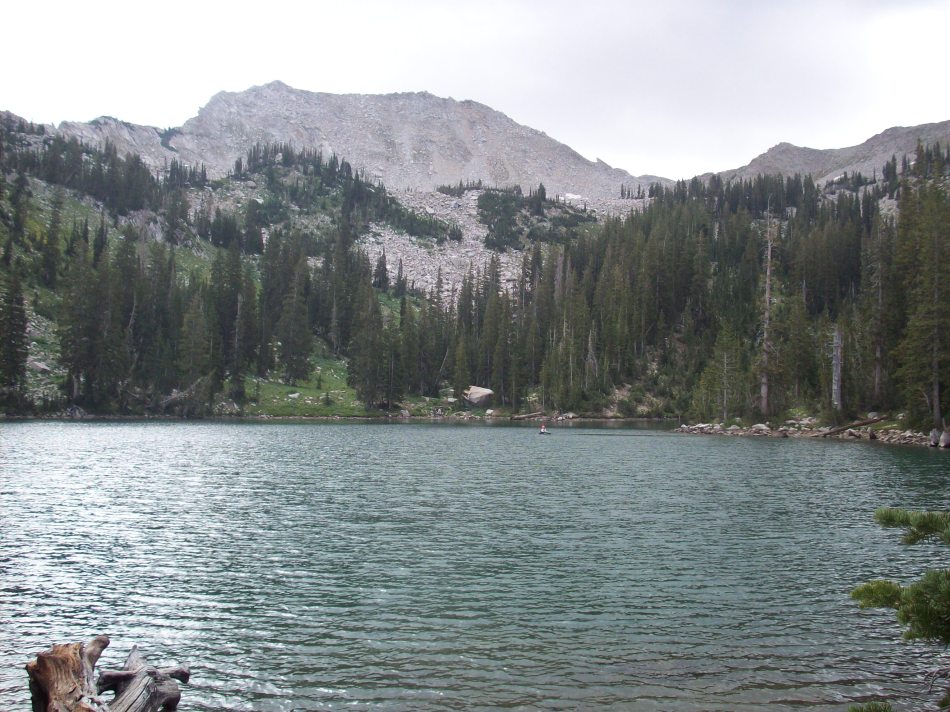 It seemed that my hike that day just didn’t take enough time…I wasn’t out there long enough.  But I didn’t tell anyone that I was going there, up to the lakes, so I should just head back, I thought…and enjoy the last two and a half to three miles of forest and trail that would take me away from there and back into daily life with its people and traffic and taxes. 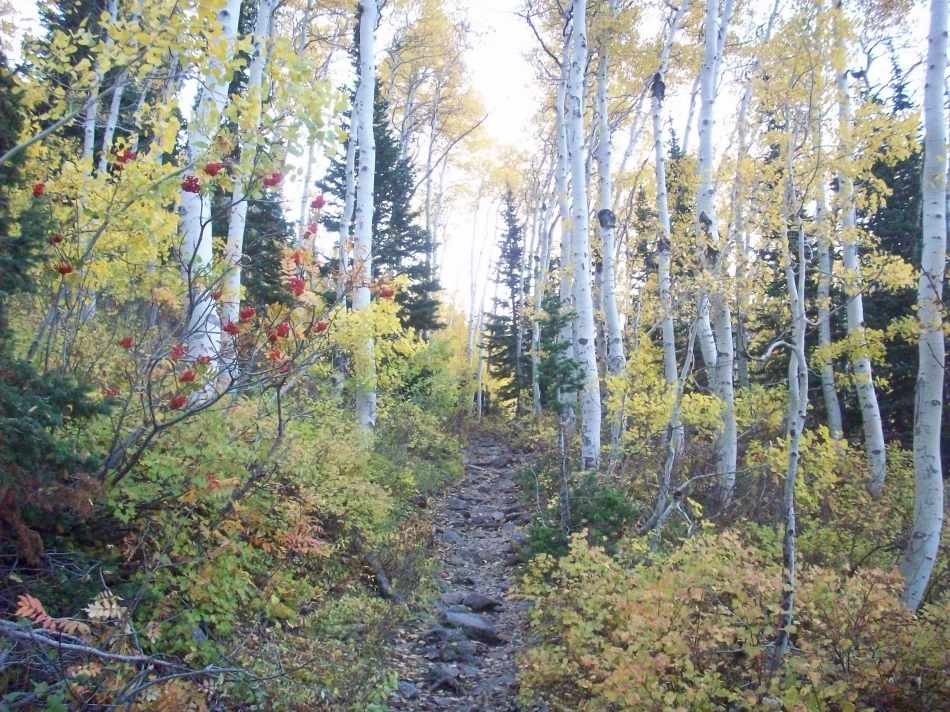 I love this place…and its everything.