This is the final post in a series in which I have shared my hike up into Days Fork Canyon, another of the tributary canyons that extend off of Big Cottonwood Canyon, just east of Salt Lake City, Utah, USA.  I’m not sure what this large piece of iron might have been during the mine’s operation, but it remains with us in its multiple pieces, somehow resembling a face-plate for a piece of machinery…brought west from Bridgeport, Massachusetts, in whatever year.  I have Googled “iron works Massachusetts” and have found a bit of information, but nothing with “Roberts” in a company’s name…so who knows what this is or might have been.

Another hiker has made a stack of remnant bricks atop the machinery, telling those who follow that this is part of the trail…. 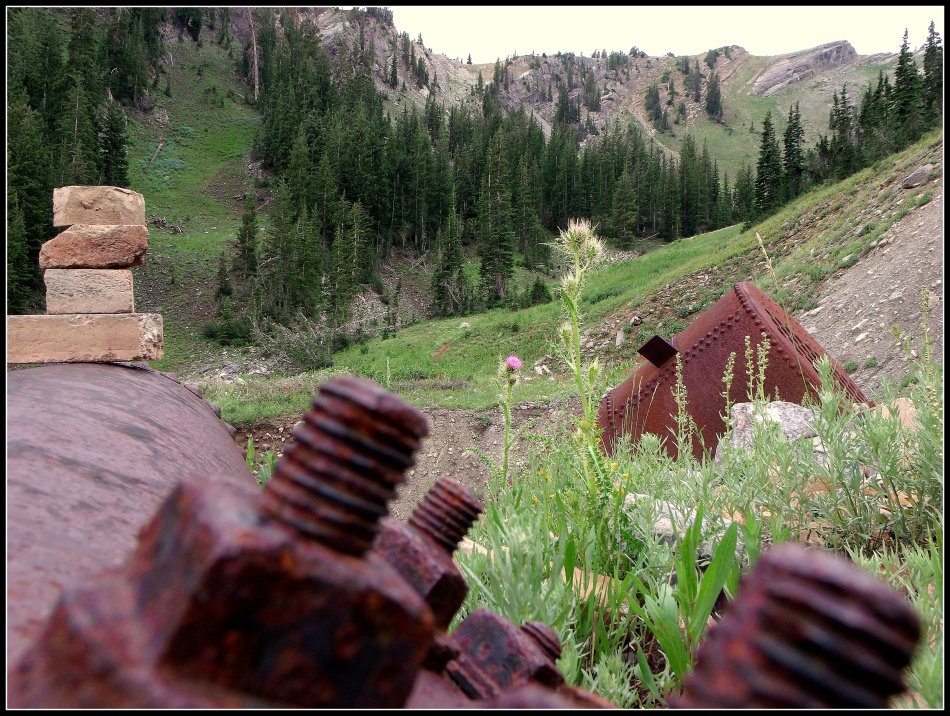 The hillside has begun to slide and cover the hoist…and the mine is slowly swallowing one of the remaining boilers….

I like the rich colors of earth and rust and the greening of Life that wants to take back what is hers…with a touch of pink on the Indian Paintbrush nearby…. 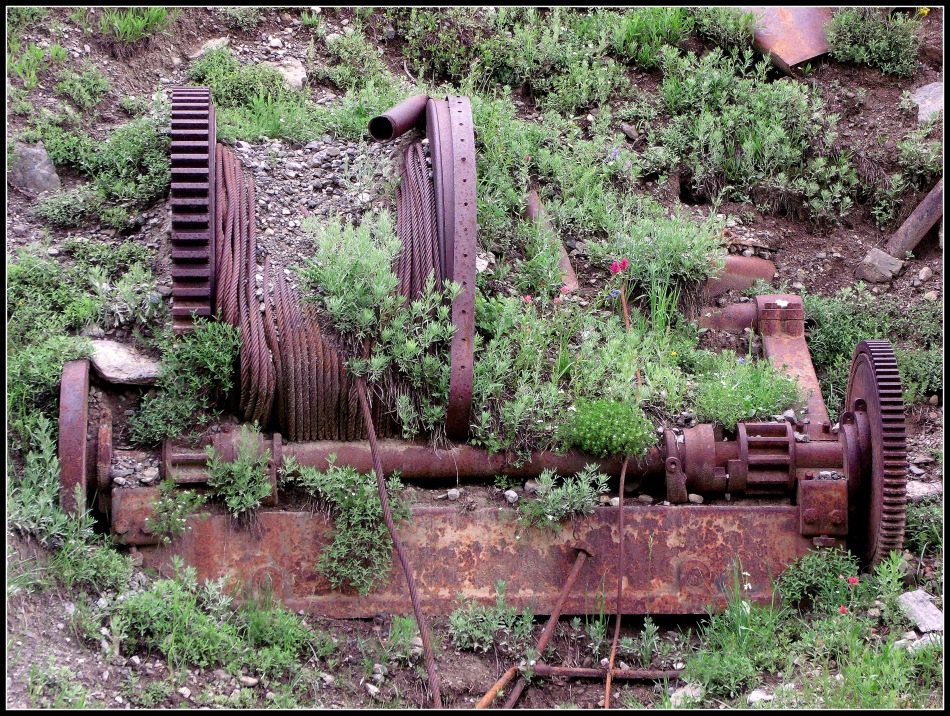 I don’t know the proper name of this petalled piece of cog-ware, but we can see its former function in the third photo below this one…as it appears to have a twin on the left side of the hoist that is also pictured above. 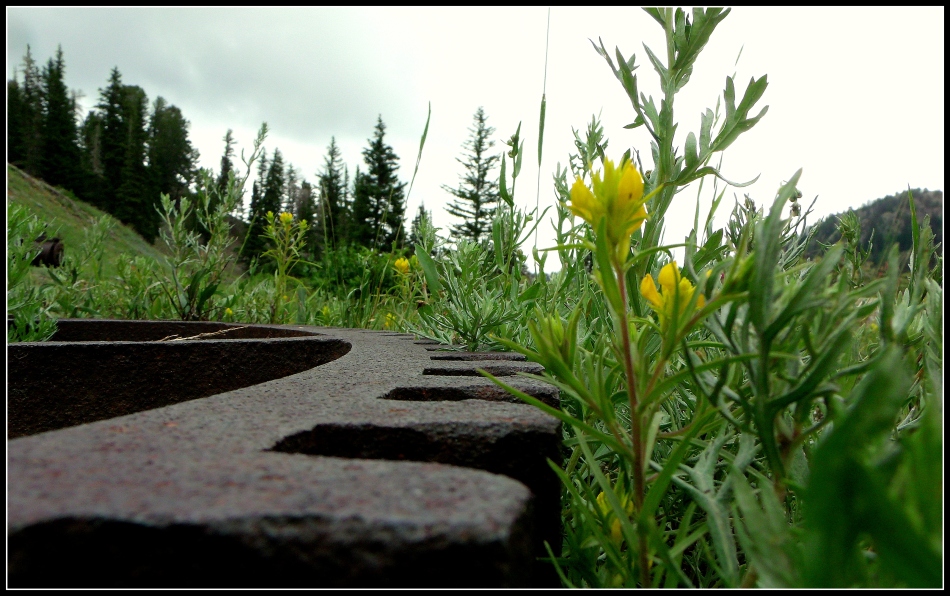 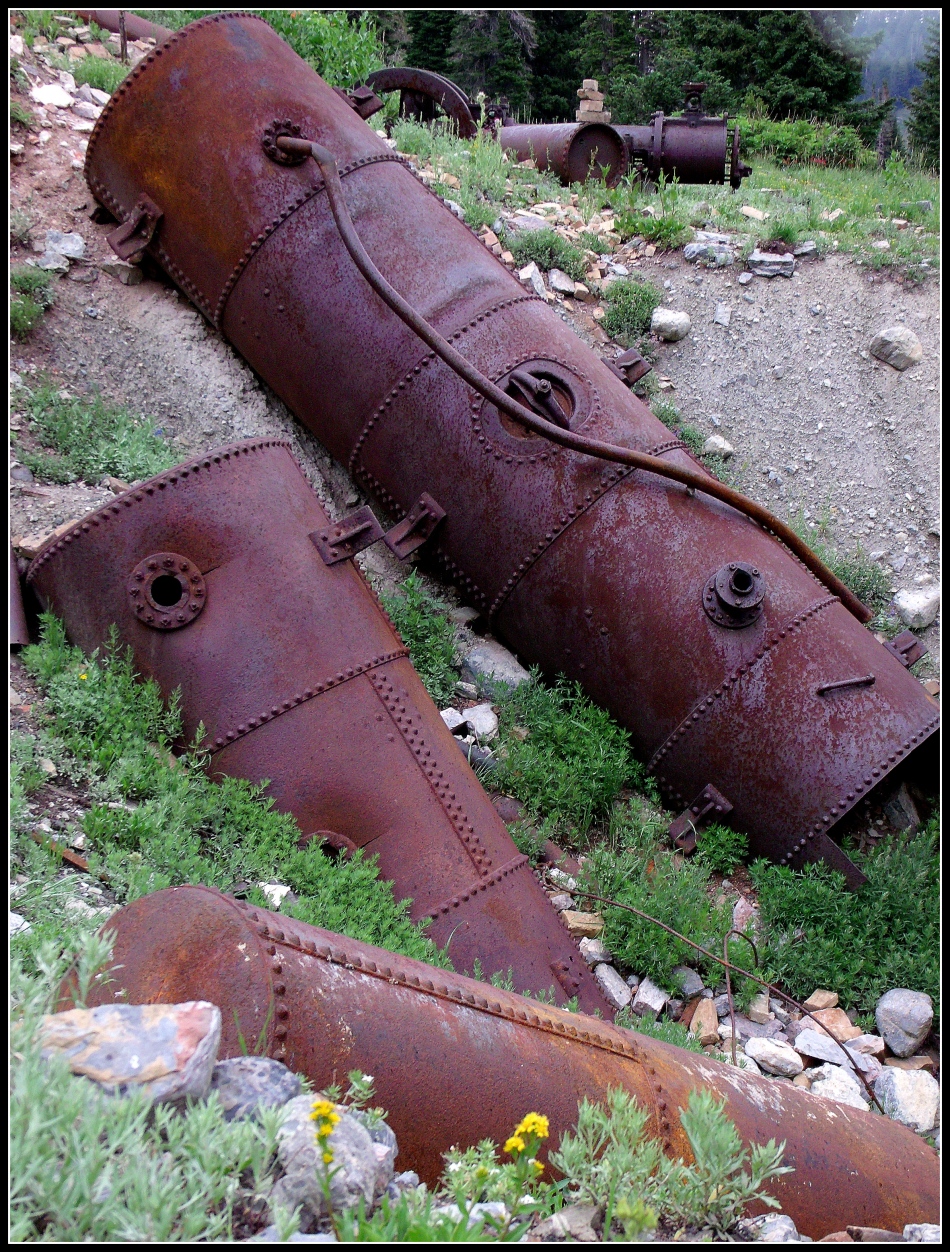 The trail continues to the left of the area shown in these photos.  It goes for another quarter of a mile or so into the terminus of the Fork…a sort of bowl-shaped dead-end that is littered with rocks and trees…and has some other mining tailing-piles up on the surrounding hills.

This is the last picture I took of the area, below, as the clouds that had been moving in my direction all morning had started to sprinkle and then rain.  I think it might have been just as well, though, because as I ventured further above the remaining snow and onto the lower portion, and then to the right on that slope you see in almost the dead center of the photograph, I had a feeling of sadness come over me and rather lost the desire to take any more photos. 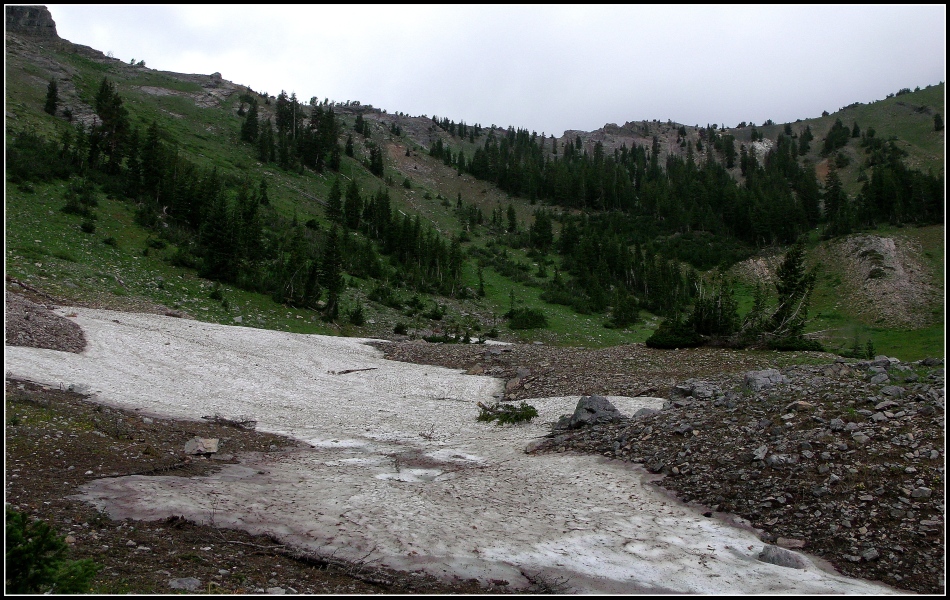 I think the melancholy was due to witnessing the remaining damage that had been caused by our forebears’ attempts at industry…bare hillsides that must have been pristine and thriving forests before their arrival.  I don’t know how long the mining operations continued in the area after the burning of the Eclipse Mine in 1888, but if they were to have stopped immediately after that incident, this area would have had/has had approximately 124 years to recover.  Yes, we can see that Nature has begun to reclaim what is hers by slowly swallowing the boilers and with the hillside sliding down to envelope the hoist, but it seems like it’s going to take quite a long time before we can no longer see traces of ourselves out there.  We have the ability to obliterate forests in a couple of years…but they will take hundreds more to return on their own.

If you’d like to visit the two earlier posts, Days Fork – I and Days Fork – II, just click on their highlighted names to do so.  Thank you for stopping-by and spending a bit of time with me.  I hope you’ve enjoyed the hike….