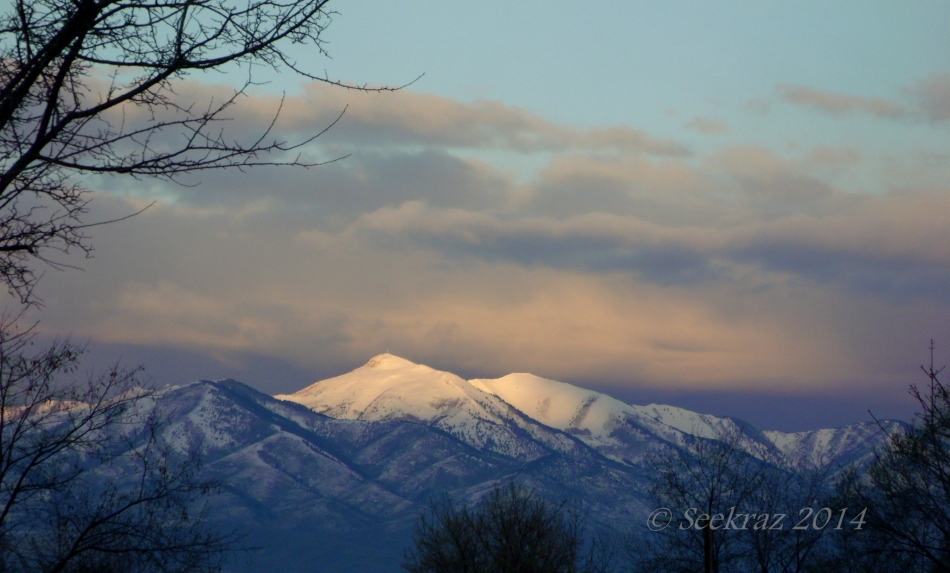 It was a beautiful, winter morning and I had gone west from the Salt Lake Valley in hopes of finding some migrating Bald Eagles.  I had no luck with that part of the adventure, but I did find a sun-clad sky, snow-covered mountains, and a refreshing breeze moving through the valley that contained Rush Lake.  If you’re interested in such things, you can click here to read what Wikipedia has to offer about the lake.

At 9,400 feet in elevation, this is under several feet of snow right now, but this is what Bells Canyon upper reservoir looked like in August, 2013.  After a moderately strenuous, four-hour hike to reach the location, there is peace to be found along the shore of this desolate, alpine lake.  While there is no snow on the Salt Lake Valley floor, it will be another few months before the trails are clear enough for me to make the venture this far up into the mountains…and I can’t wait….. 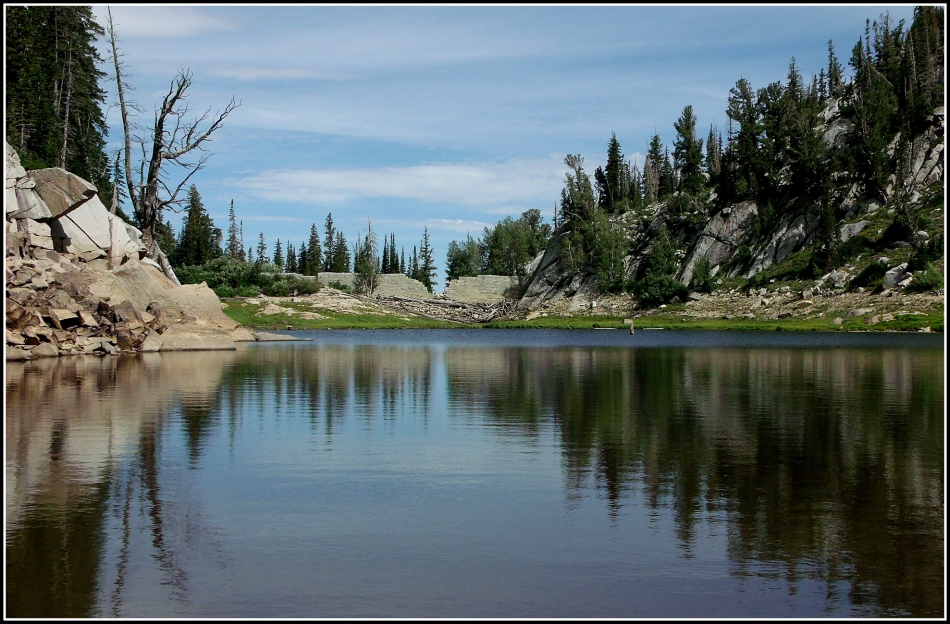 it was the first in another stage of what has already been many trips down the road to and from an old place to a new one and back again and now the old is new and the new is old and desire is pulled in its different directions while the things that are passing are indeed passing and mostly without notice because they are not seen in their many familiarities, the eyes are on the road and the surrounding mountains and clouds in order to make it from one point to another and all the things in between are scant registers on a mental screen that has been focused toward what is within and not without…

the shadowed and purpled mountains didn’t register inside the lens as they did in my mind and it was only with disappointment that I stared at the screen with its muted hues and wondered at beauty and desire and hope, I had looked closer in another direction, through the side window, actually, beyond the bug-splatter on the forward windscreen and the highway railing and yellow lines and fractured glass and butts along the shoulder and it didn’t just come to me then, I had to seek it out, intentionally

This is a wider angle of a similar image that you might remember from my earlier post, Sailboats on The Great Salt Lake. Looking west, that is Stansbury Island in the background…a continuation of the string of mountains that have the same name and extend several miles south from the lake. 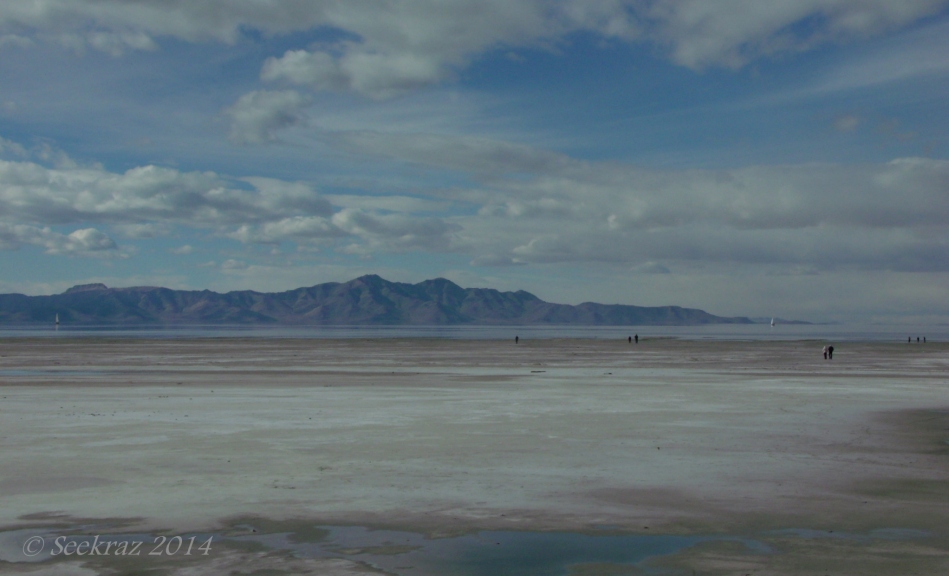 I made the images from this last series on the way back to the mainland from Antelope Island.  About three hours had passed since I made the earlier images of the tree stump that you might remember from the first post in this study.  Much of the fog had cleared and the clouds were slowly parting, allowing the blue sky to be revealed over the island behind the dramatic clouds.

If you’re not sick and tired of viewing images from Antelope Island and actually want to see more, either from this series or the other visits, you can scroll to the bottom of the page, find the Categories widget toward the right side, and then click on Antelope Island to view a continuous feed of all the earlier posts. 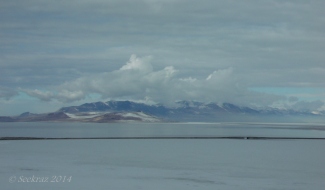 Looking north and east, past the causeway, from the shore of Antelope Island.

A tiny car captured on the Antelope Island causeway.

Fremont Island and cloud reflections in The Great Salt Lake. 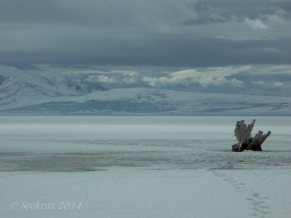 Revisiting an earlier subject that you can find in its full-color rendition by clicking right here. 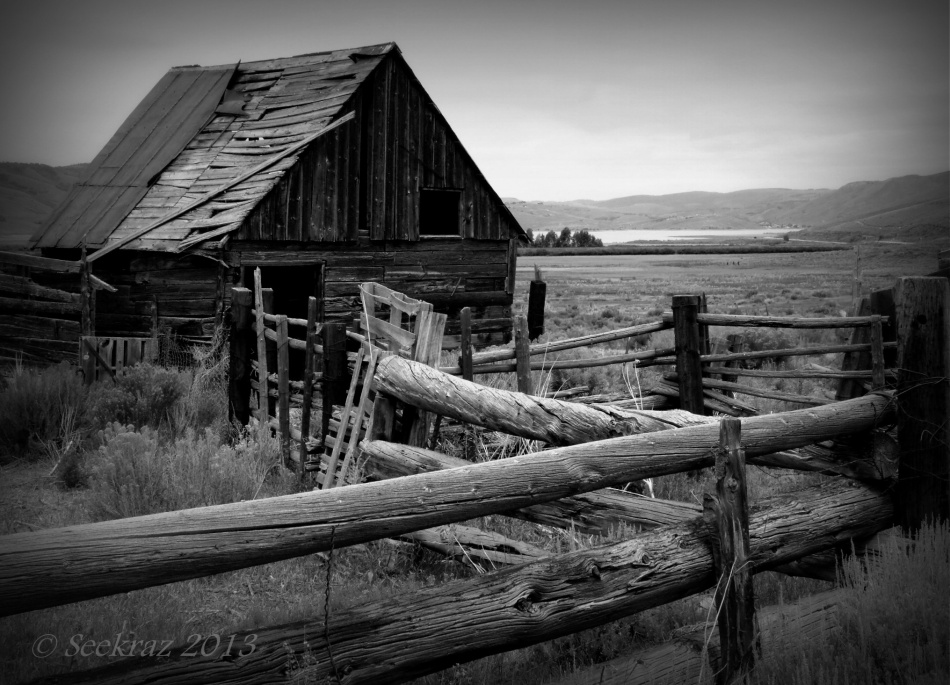