Sailboats and Saguaros just don’t seem to go together, but here they are at Lake Pleasant Regional Park in the extreme northern part of Maricopa County, Arizona.

My little one and I were out exploring again the other day…we drove about 15 miles from the house and found ourselves near and around Lake Pleasant Regional Park…a man-made reservoir that captures the waters from the south-flowing Agua Fria River and the Central Arizona Project canal system.  I will likely share a few photos from the lake in one of my next posts, but I wanted to first introduce you to some other critters that we encountered while taking a short hike in the surrounding hills. 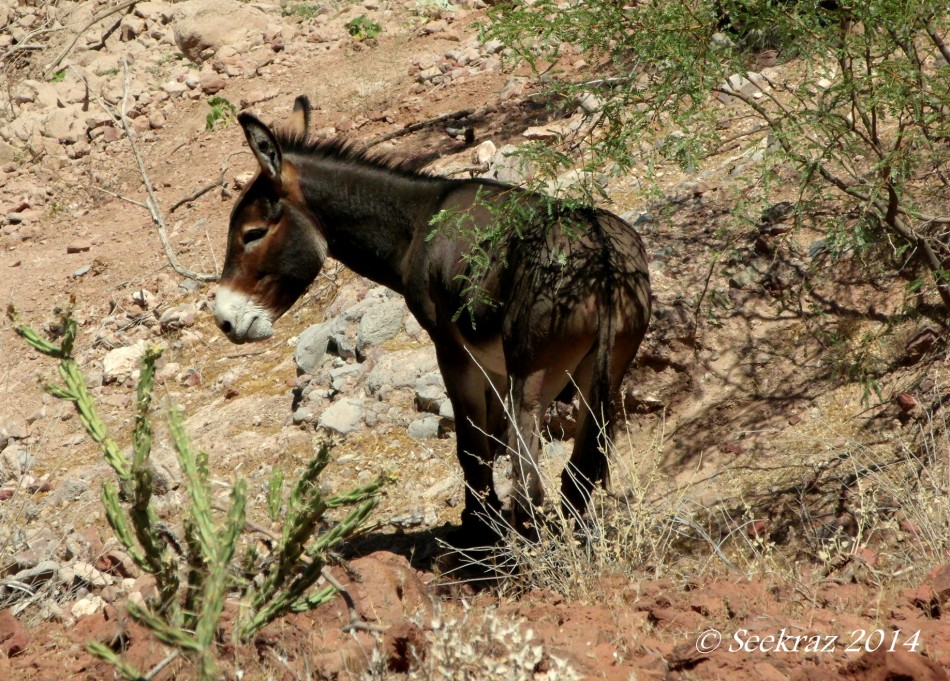 My son and I had seen some “horse-like” droppings along the trail and figured that they were actually from horses that were ridden through the area, so we were a little surprised to find these wild Burros out grazing among the trees and bushes on the northwest side of the lake.

Looks like the little one above still needs to grow into his or her ears…. 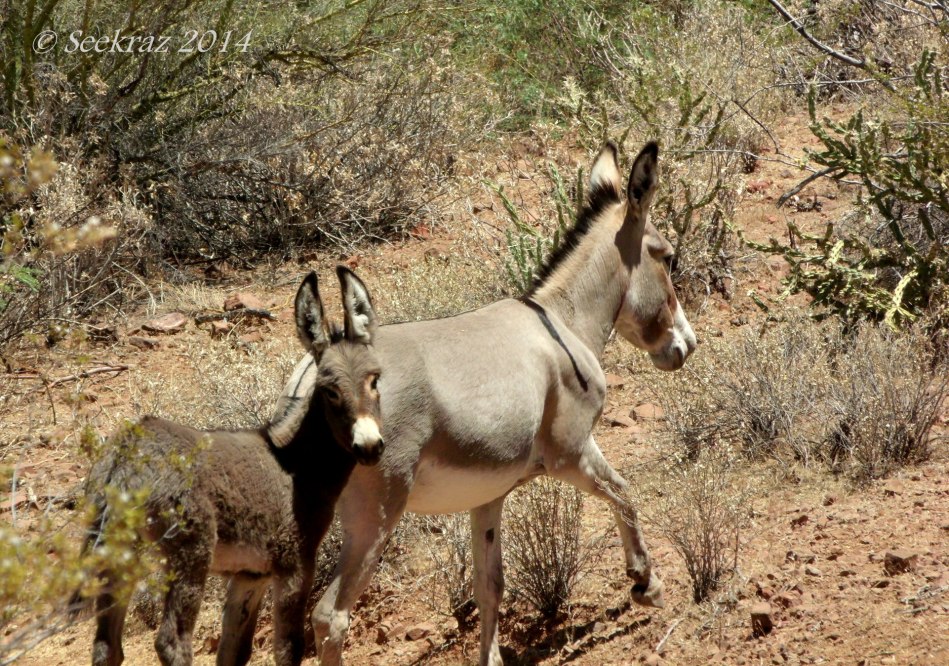 You can click on this link for the Wikipedia article on Lake Pleasant…and this one for more information on the wild Burros if you’re interested.

This is what it looks like facing north from an anonymous peak just east of my neighborhood in the Desert Hills area of north Phoenix.  I believe that might be Daisy Mountain near the far center of the image.  It was eight minutes before seven and the sun was nearing the western horizon and you can detect a slightly golden hue in the desert foreground…sparsely placed and youngish Saguaro cacti populate the area among Creosote bushes and the reminders of the region’s volcanic origins….

My little one and I were taking a walk this afternoon, along the Verde River Greenway just west of the Tuzigoot National Monument, when we were suddenly and unexpectedly encouraged to turn-around and leave, or at least go find somewhere else to hike……  Seems that not everyone here enjoys sharing the trail….

If I were to guess, I’d say that it’s a “Speckled Rattlesnake,” although, without having a really good look at the markings directly on top of the creature, it’s difficult to be certain.  You can click here to see what the Arizona Game and Fish Department has to say about the 13 species of rattlesnakes that live in Arizona…..

I mentioned in an earlier post that I had found a trail leading into the mountains and purposed to go hiking that evening.  There had been uncommon clouds over the valley for the majority of the day and I hoped they might remain into the same evening, providing a classic desert sunset.  While the clouds were a slight disappointment, the view from one of the nearby peaks made-up for what was missing relative to the clouds.

For those of you not familiar with the metropolitan desert that is Phoenix, Arizona, there are several neighborhoods or areas of the city that have their own names…some of them have, and others might still become separate incorporated areas or towns, distinct entities from Phoenix-proper, but for now they are simply named-areas that are familiar to denizens and nearby others.  The particular area where I now live in the extreme north of Phoenix is named Desert Hills…and for good reason.

The high daytime temperature yesterday was somewhere in the low hundreds…and I imagine that it was probably somewhere in the mid-nineties by the time I came down from the mountain and entered the neighborhood again.  There had been clouds across the sky throughout the day, but they didn’t stick-around long enough to be significant with regard to the sunset…but there were bats circling the near-nighttime sky, skittering and dashing about as bats will do, finding their evening (or morning?) meals on the wing and disappearing into the blue-black shadows of the coming night.

I was walking back to my truck when I noticed the dash of white-yellow-orange-pink of the airliner passing the silhouette forms of these statuesque Saguaro cacti.  If you’re interested, the tree is a Palo Verde and the more linear stalks of cactus in the lower right corner are from a single Ocotillo…..

Wishing you a pleasant evening from north Phoenix, Arizona, USA.

I drove north and east this morning…this false first-Saturday in this new and old place.  The true first-Saturday found me unloading moving trucks, you might remember…so this was the first one that was unoccupied with moving and other commitments.  Like I said, I drove north and east, trying to get closer to a huge mesa in that direction which has been unimaginatively named “Table Mesa,” which to my understanding of Spanish, ends up meaning “Table Table.”  At any rate, I found myself only in the vicinity of that place, several miles, really, away and away from the redundantly named mass of earth and rock that rises table-like from the lower desert floor.  The below image is not of that so-named bit of earth and rock, it is of other bits of desert hillsides and ridges and crowning greenery and thorns and chunks of volcanic waste that was left behind after their own genesis in the eons of millennia passed.

After completing something of a circle of exploration of that land to the north and east of my current desert home, I headed further north and east along new, yet known roadways…heading toward another desert town that lived in my mind as a memory of only a brief visit that occurred nearly 30 years ago.  Along the way, however, I encountered a sign that said “Seven Springs,” a notion of a recommended place that I in particular might enjoy…”It’s green,” she said, “with a stream and cottonwood trees…,” things that reminded me of another place, one that I have only recently left behind….  The last image in the below gallery shows what the area looks like from above, rather…a nearby area that is strikingly similar to the visited Seven Springs….a flowing greenery that lives in the narrow draws and folds that lie between rolling hills of raw and scorching desert sand and rock. 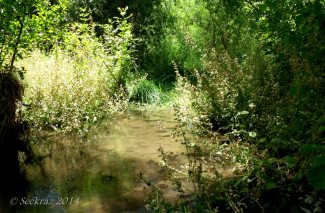 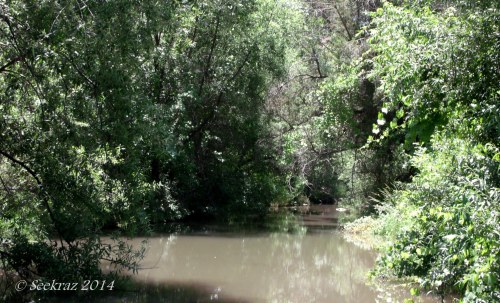 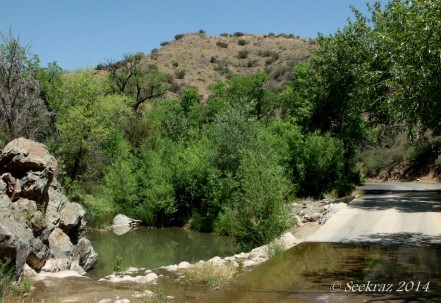 I don’t know the name of the delicate flowers in the below image…but I found the plant along the waterway of Seven Springs…. 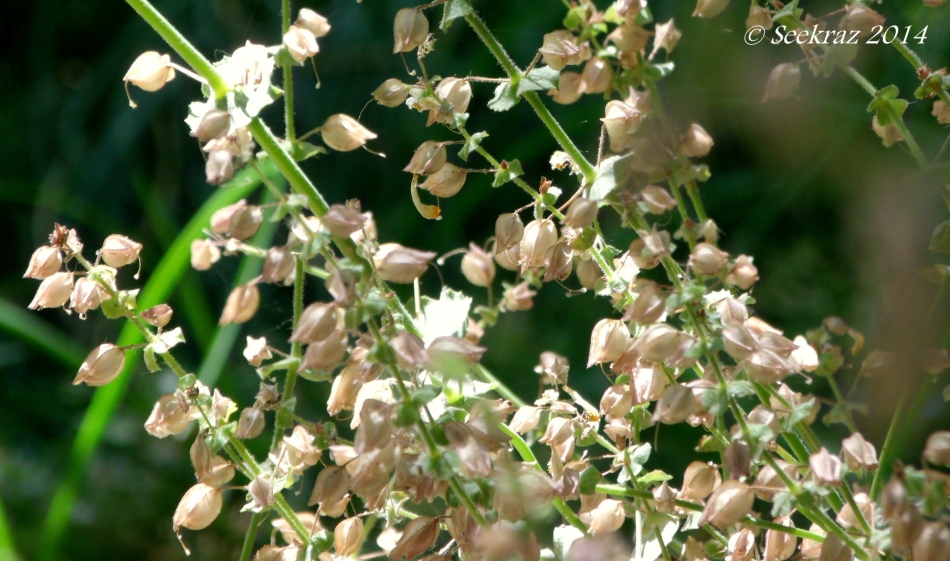 …and a yellow Columbine, too…a different version of my favorite flower ever, the Colorado Columbine that I shared in this post if you’d care to see a similar and beautiful creature in pristine, alpine white…. 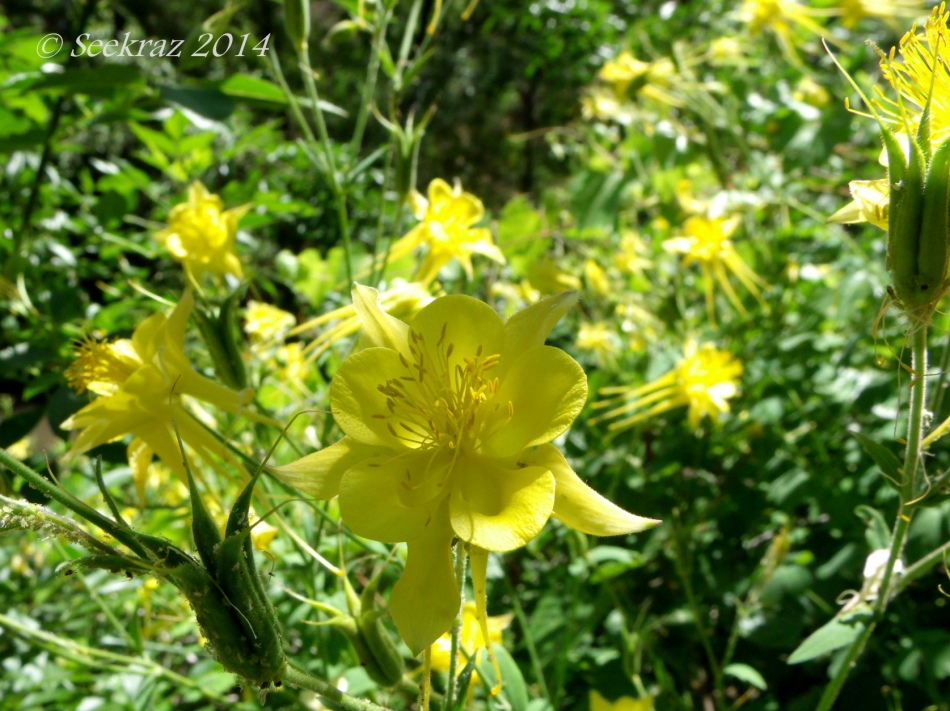 This Saguaro Cactus is probably close to 25 feet in height…one of what must be hundreds and hundreds of the amazing plants that populate the vast Sonora Desert of Arizona.

Forgive the slightly washed-out white of the Saguaro’s blossoms in the below image…today was one of those days that my sons refer to as “severe clear,” meaning that there was not a cloud in the sky as the June sun beat down upon the desert…. 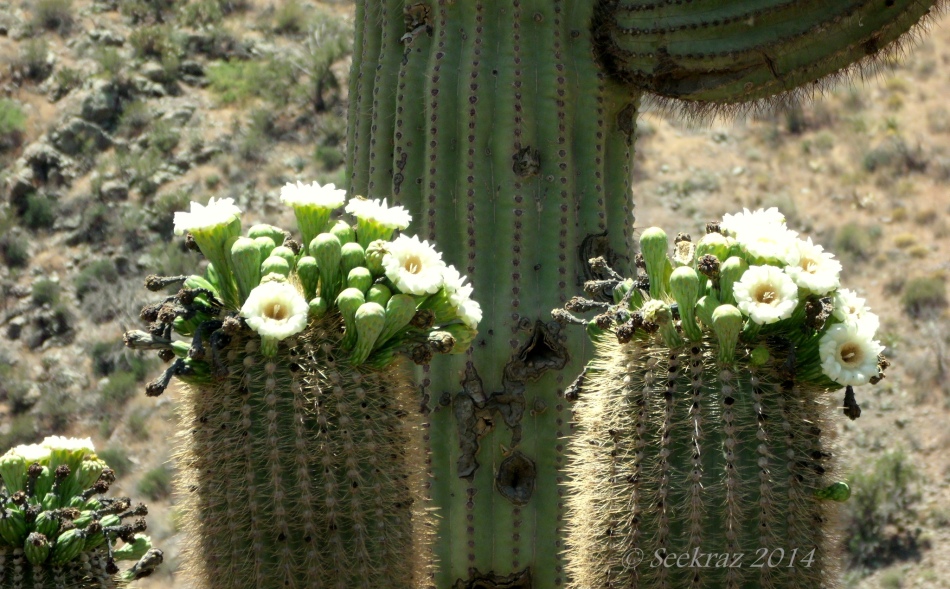 Hmm…maybe a little fuzzy on the yellow…. 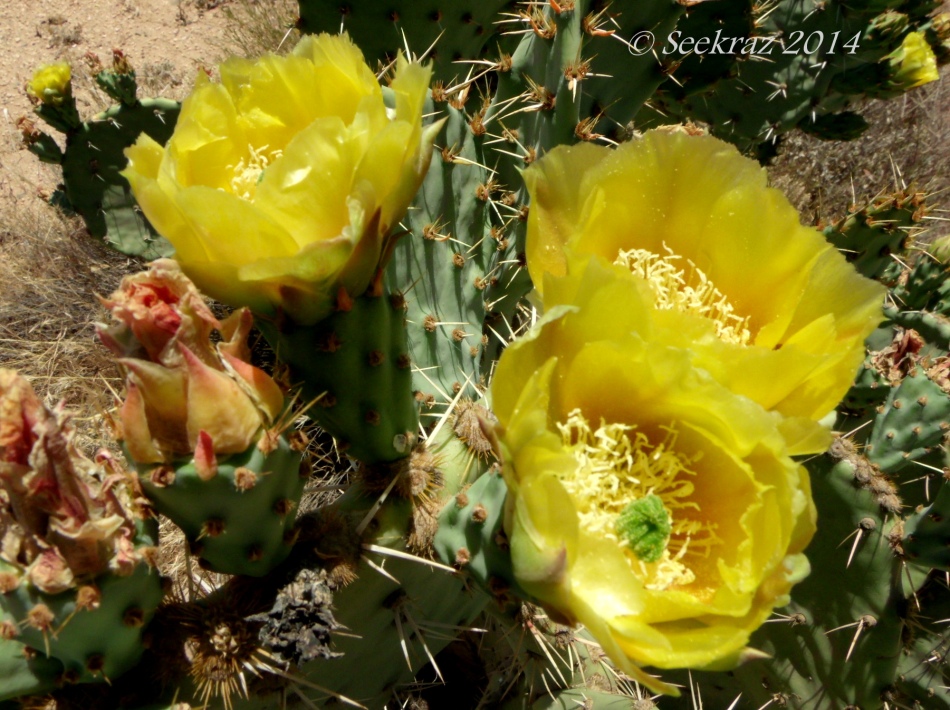 …and lastly, looking down the hillside into one of the desert draws…you can probably make-out the dry waterway…a sandy pathway that leads to the greener foliage in the upper left of the image…early Spring rains and Summer monsoon storms bring the stream-beds to life again…. 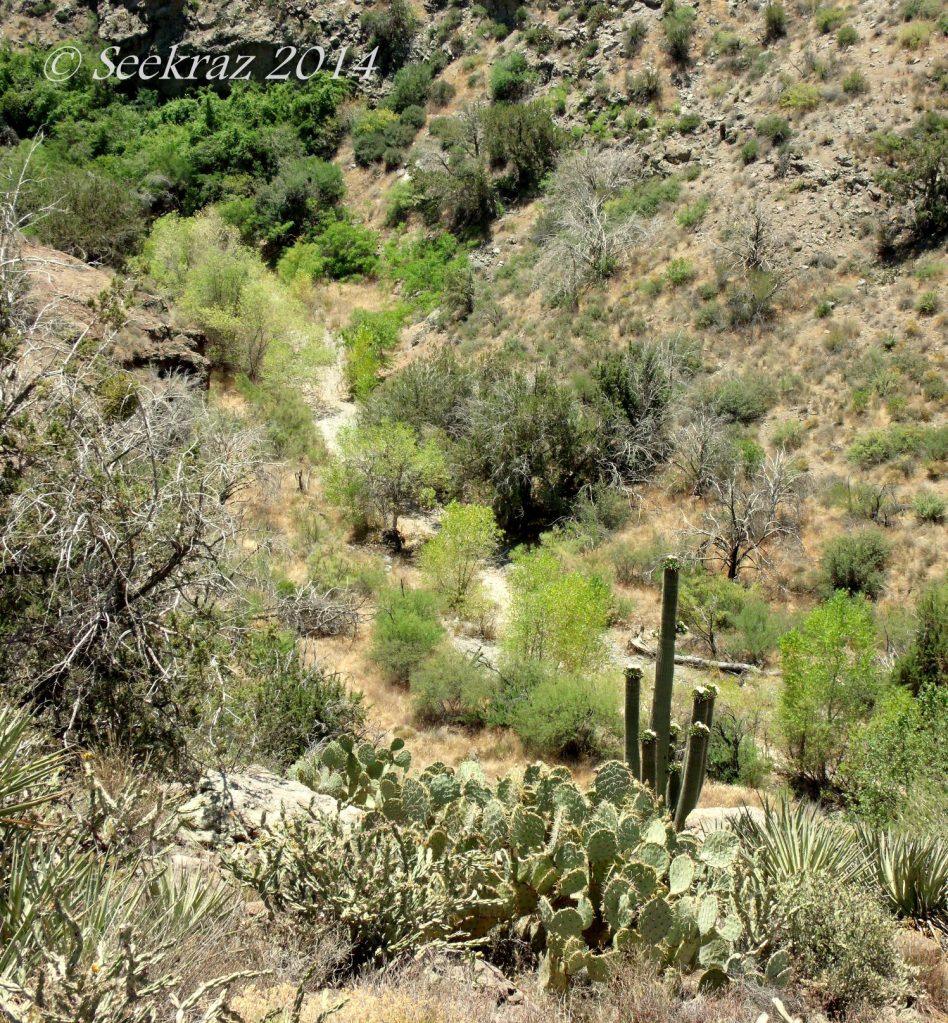 after sunrise in the desert