It’s been a few weeks since I started the City Paint Phoenix series, but here’s the second installment…all images were taken the same morning as the first of the series, City Paint Phoenix 1 – “Old Man Phoenix.”  I don’t have a single image of the entire mural, as I would have had to stand a couple of dozen feet further away, and doing so would have brought me fully into the morning sun, so please try to imagine these first six images linked together from left to right, and you’ll have the entire mural.  This piece of art is on the west-facing wall of a salon named, “Hair Pollution,” at 1524 E McDowell Road in Phoenix proper.  I’m not sure how long the mural has been on this wall, but I found various links to it on-line, dating from 2012…when the paint was much less faded by the Arizona sun. 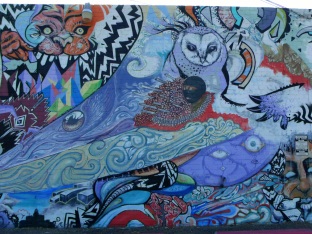 The second collection of photographs are close-ups or isolation shots of the various components, elements of the greater mural that struck me as significant in their singularity and caused me to wonder at how and why they might or could be related in such a way that would cause the artist, Joerael Julian Elliott, to combine them in this presentation.  By the way, if you follow the link to the artist’s website, you’ll find (among other fantastic and wonderful things) a photo of the mural in its full form if you click on the “Public, and then the “Street” tabs.  Also, please remember that you can click on any image to be taken to a slide-show that provides an even closer look at each photograph. 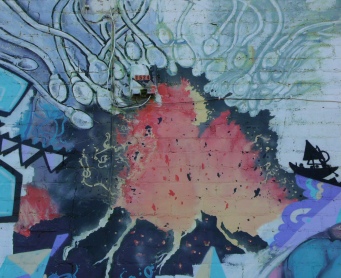 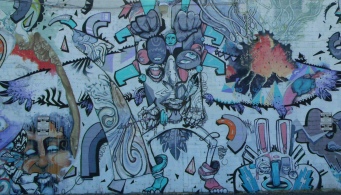 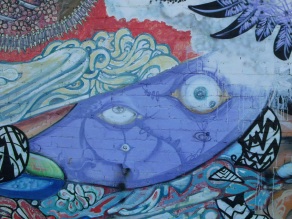 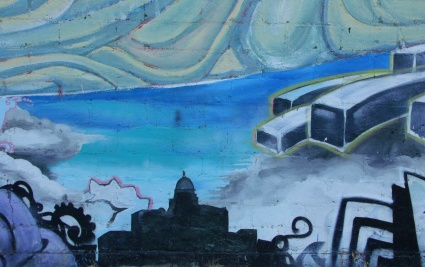 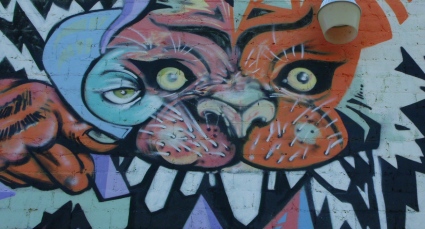 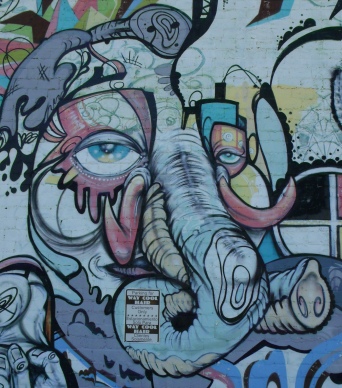 I hope you’ve enjoyed this second showing in the series of City Paint Phoenix…a representation of some of the street and building art that I’ve found during my commute and wanderings in my new and old home of Phoenix, Arizona, USA.  If you’d like to see earlier postings, from both Phoenix and Salt Lake City, you can scroll to the bottom of this page and find the Categories widget…click on Street Art – Graffiti, and you’ll be taken to a continuous scroll of those earlier posts.  Thank you for visiting….

There was a time when I wondered why it was called “field work,” but I never asked about it, and after a while, it didn’t matter.  It became one of those words that just was, it represented things that were both inside and outside of its clear meaning; it was a job thing that those who did the work knew about and those who didn’t might wonder about for a while and then not, after the conversation or topic was discussed or reviewed, or maybe not…it came to be understood for what it was, we were out of the office looking for people…out in the field, sometimes literally, literally out in or near the fields, maybe sometimes just driving past them, watching brown skinned people bent over in their labors plucking and pulling some vegetable or other from the irrigated desert something, hauling it in sacks, placing it in waxed and sun-warmed boxes that lay in rows between the rows, becoming heavy with their loads of that some thing or other…and sometimes I’d pass other fields and become so transfixed with what grew there that I had to pull over and get out and look at them, at it, at what was growing there, to ponder those things up close and with my flesh and senses in a way that I could never do sitting behind a desk or absorbing intended meanings by reading someone else’s printed words about what they had beheld out there on the side of the road when they were there…watching harvested carrots tumble from a truck into a bin and then carried loudly away on a conveyor belt into a tin-covered shed with blue-jeaned and white-shirted black-haired young men scurrying about…intentional, purposeful in their scurrying as fighter jets from the nearby air base passed, screaming loudly overhead…jet noise, the sound of freedom.

These became my fields, my stretches of irrigated and corrugated earth that smelled like a warm and freshly opened bag of sour-cream and onion potato chips when the onions were being harvested, or expanses of red and pink and yellow and white blossoms lying restless in the breeze atop their green bushes of rose leaf and thorn that stretched to a near horizon of Phoenix’s western desert, or the rows and rows upon more of the same of white cotton bolls rich against their brown and dried plants of late summer, soft and marvelous in my gentle and searching fingers, waiting to be harvested by rolling machines that were loose from chains and whips and had drivers with air-conditioned cabins and cup-holders…rolling, plucking, chopping and raising the desert dust again to fly perpetually away in the breeze and gone…they became my fields that live in my memories and my printed words…and maybe even in my heart, as these things sometimes do.

I was back in the field again the other day in the place where I started doing this county-level work so many years ago…and while I did drive past fields and fields, some sown and most fallow or raw in their desert form, most of my time was spent in the figurative field of city streets and neighborhoods, apartment complexes, and doctors’ offices, visiting and searching, finding some people and taking a small tube of their life’s blood from them, finding another some by going door to door in an apartment complex asking, do you know Tom, do you know Tom, I’m looking for Tom, have you seen Tom today…not finding some other people, but finding people who knew them, people who loved and dreaded their homecomings when they get out of jail this weekend, people whose lived lives are worn in their tired and wrinkled faces and hands, in their faded tattoos that spoke of prior affiliations or devotions…of tears shed for lovers and sons who were sent away, and in the sweaty palms of anxious little sisters and daughters who carried their futures in their swollen bellies and were shyly proud of being the only one who had never been to jail…they wore those lives on their persons and in their slurred and whispered words that echo still in fresh memories that are only a few hours old and are reminders yet of other fields and visits…and other found and unfound people.

It is near amazing to my green and mountain-loving heart to see such greenery smack-dab in the middle of the Arizona desert, but there it is.  I made this image from the bridge crossing the river during the same excursion with my little one in which we were not allowed to share the trail with the uncompromising rattlesnake….  Wishing a happy Friday to everyone…..

another rendering of archetypal mother…maybe…that’s what I thought, anyway, when I came upon this pine cone nestled into the curve of an old branch on the forest floor 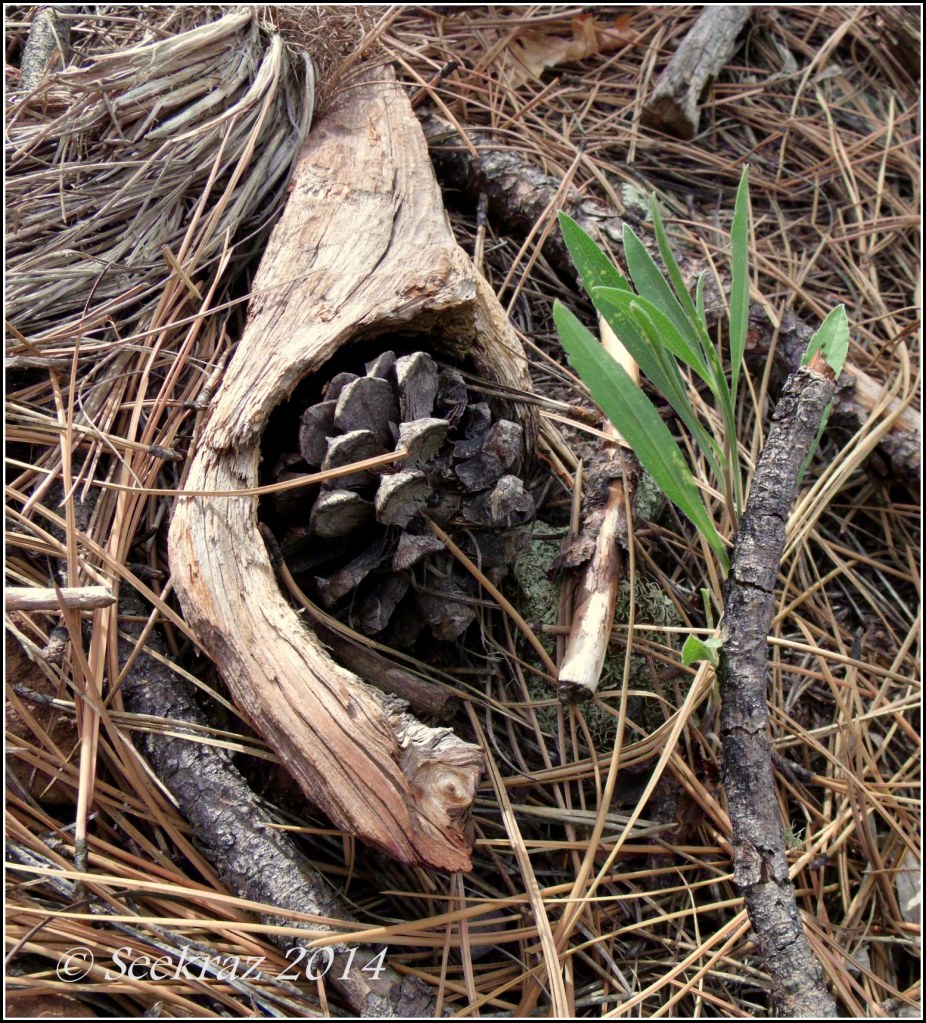