I’ve seen it referred to as “The Phoenix Goddess” in a few different locations, but the artist, El Mac, refers to it as Southwest Goddess on his website…click here if you’d like to check it out for yourself. 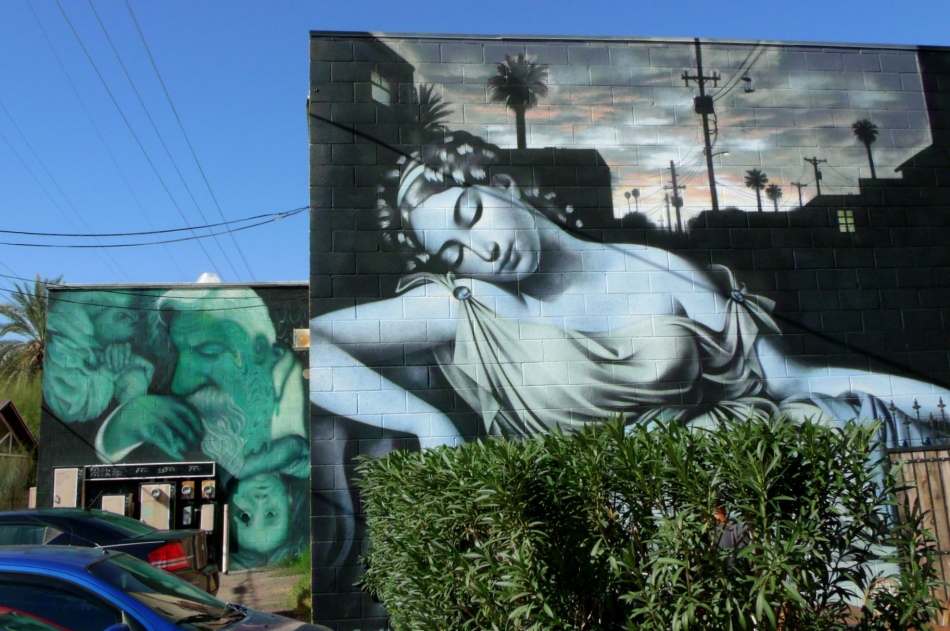 The directions I found on-line on how to find the mural states simply that it’s in an alley south of McDowell Road between  3rd and 5th Avenues…another set of directions indicate that it’s on an essentially hidden wall of the Laird Apartments at 317 West McDowell Road.

I happened to find it through the first directions, driving up and down alleyways….  There were two other murals close-by, one of which you can see in green paint on the left side of the first image above.  I may feature them in a later post.

The fact that the mural is on the east-facing wall of the apartments might have something to do with it remaining in such good condition after being there for 10 years.

This is the fourth mural by El Mac that I’ve featured in the City Paint series…two others in Phoenix and one in Salt Lake City.  I have already collected images of two of his other murals in the Phoenix area and know where a third one is, but haven’t gotten to it yet with my camera.

If you’ve enjoyed viewing this fine example of street art, spray-paint murals, building art, or whatever else you’d like to call it, you can scroll to the bottom of the page and click Street Art – Graffiti under the Categories widget to see more posts containing this genre of art from both Phoenix and Salt Lake City, Utah.