It’s a little more than a week-old at this point, but it’s one of the only “nice” shots from the entire five hours out there, so I thought I’d share it.  This is photo #6, taken at 7:05 a.m., on the Black Canyon Trail, heading north from Black Canyon City, Arizona, USA.  It was hotter than blue blazes toward the end of the hike and there was nothing so inviting as the thought of getting into the truck and making a quick stop at a corner store for an ice-cold Coke.  I’m not in the habit of doing that after a hike, but it sure was wonderful on this particular afternoon!

Driving through the city on my way to work a few weeks ago, I happened to look south and spied a couple of faces staring back at me.  I had time to spare before I had to clock-in at the office, so I parked the truck on a side street and took a little walk with my camera.

Moving a little closer, and a little to the east to get the tree out of the way….

I walked down the street a bit and attempted to approach the mural from the property entrance to the left of the mural and found that there was yet more….

Three more faces, two of the masked people and….a snowman?  Given that this wall was right at the entrance to the parking lot of a small apartment building, there was no problem gaining access and taking a few closer shots.

Enjoy the gallery….and remember that you can click on any image to be taken to a sort of slide-show that allows you to view each image in a larger format. 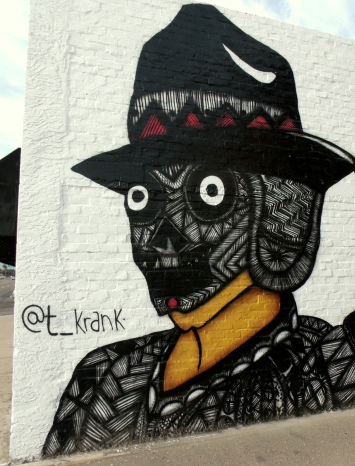 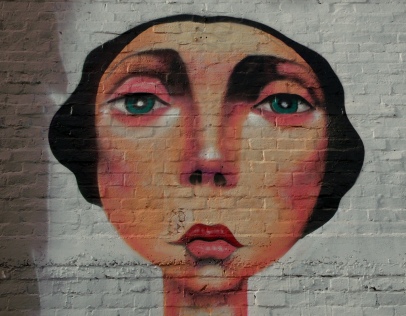 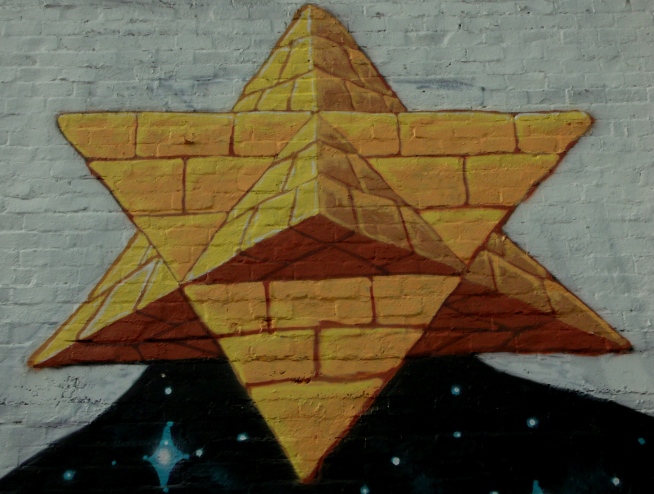 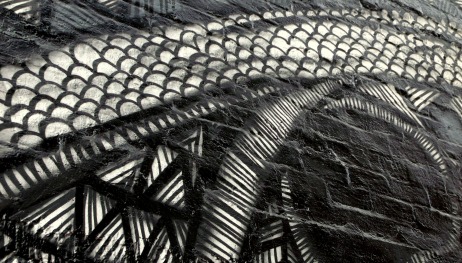 As I was heading back to the truck, I happened to glance across the street and found yet another Cabeza Curiosa mural…. 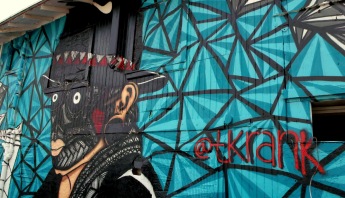 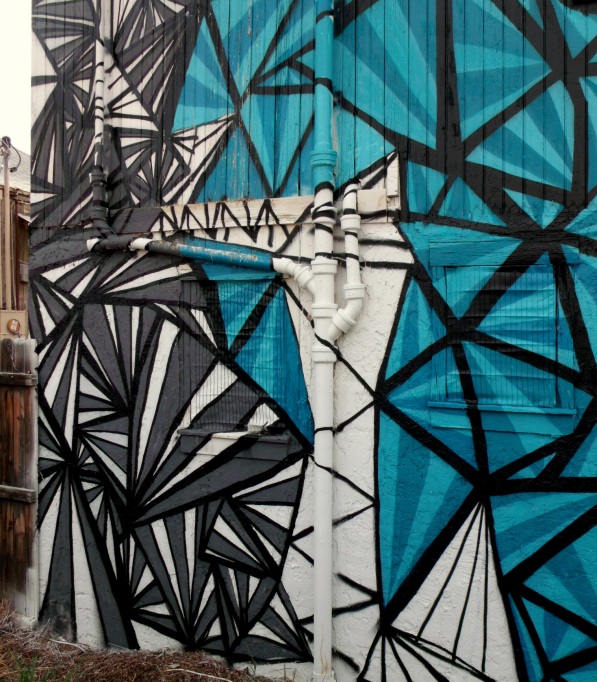 I found these murals on buildings located at the intersection of 7th Street and Pierce, just east of downtown proper in Phoenix, Arizona.  As you can see in three of the images above, the artist is listed as “@t_krank” on Twitter, Tyson Krank, and you can follow this link to a short article about him in one of the local newspapers.

I hope you enjoyed this latest presentation of the City Paint Phoenix series.  You can see other posts of Phoenix’s street art, and Salt Lake City’s, as well, by scrolling to the bottom of the page, finding the “Categories” widget, and clicking on “Street Art – Graffiti.”

There was a certain feeling of nakedness and vulnerability that came with being the only visible white person within several blocks…who was also standing on the second-floor landing of an outside staircase in front of a faded and worn, black security door and having an invisible dark-brown voice coming out from somewhere on the other side of the door telling me that I needed to leave…telling me that I needed to go, to be gone, to be absent, to be somewhere else…anywhere else…and away.

It was full daylight on a bright desert weekday in some kind of month when the sun was making my face run with sweat, smack-dab in the middle of the neighborhood at 15th Avenue and Buckeye, easily within the perimeter of the inner to mid-city boundaries of central Phoenix.  The address used to be 1502 West Buckeye Road, but the two-building, two-storied, and L-shaped apartment “complex” has gone the way of urban-renewal and no longer exists.  It was deemed to be part of the blight in that particular city-council precinct.  The corner was now home to just a traffic-signal pole and an empty and graveled lot that sparkled with the detritus and glass of a Mad-Dog and beer-bottle graveyard.  People parked there sometimes when they were visiting the tent-revival meetings at the “church” on the south-side of the street and a little east of there…other people parked their taco-wagons and multi-colored, plastic patio chairs there and sold those spring and summer-time evening tacos and birria (goat-meat) burritos to passers-by with a middle-loud to real-loud loud-speaker playing various folk-tunes from south of the border.  If you’ve heard them before, you know what I mean when I describe them as sounding like they come from a Bavarian Oktoberfest celebration with the polka-accordion-esque tunes that seem foreign and absurd in their central Phoenix surroundings.

As I said, there was a certain feeling of vulnerability, standing there, elevated as I was, on the back-side of the complex on that four-by-six foot metal platform at the top of the stairs.  There was nothing to hide behind and no porch-cover overhead, no posts or poles to hold an awning or sun-shade that no longer existed.  It was just my tall-assed, white-male self standing there beneath the sun with that soft dark voice talking to me through the security door.  I didn’t even have to knock –

What do you want?

“I work at the clinic and I’m looking for So-and-so….”

I know who you are, he interrupted, put that thing down.

I said you need to put that thing down…really…you need to leave, man.

“Ok…it’s really important that I talk with her….”

I know that, man, but you need to leave…please.

Yes, he really said “please.”  He was articulate and warm and kind and sounded like he didn’t belong there, either.

I almost whispered, “Alright, can I leave a card for her?” as I was pulling-out a card and envelope and pen and turning sideways to look back and around and into the neighborhood.

No, man, you have to leave, and don’t be turning around like that.

His voice was urgent, yet gentle…like it was coming from someone who was almost my friend…someone who, if he was in a different place, would be my friend, big brother, or mentor.  It felt like he was trying to protect me…to urge me away and back into some kind of safety where I belonged.

I tried to hand him my business card, not the one that I would have had to stand there longer to write on, but just my card.

So…I left.  I walked back down the sun-faded and shiny and greasy and dirty staircase and out through the alley and toward my car.  I fought against the urge to turn and look back at the door I had just left, so I occupied my mind and eyes with slowly panning side to side, searching for other people and eyes that might be looking in my direction.  Maybe they were inside other houses or buildings and sitting behind the partially closed mini-blinds that faced the sunward side of the alley and street where I walked…maybe they were in the truck or van that drove down the street and turned away and gone.

What was there?  What was going to happen or might have happened…what did I walk into…or away from on that long desert day in that whatever month where the sun was hot and bright on my face?

a study of perspective with a gone pier….

The following is yet another set of discoveries along the south shore of The Great Salt Lake…images made on a Saturday afternoon in late February, 2014…..depending on where you stand and where you are looking, you can see the Stansbury Mountains to the southwest, Stansbury Island to the west, Black Rock simply there in its curious prominence, or Antelope Island toward the north and east.  For those interested, the pier pilings are the only remains of the Black Rock Resort.  You can click here to be taken to a Deseret News article about the resorts that have come and gone from the shores of The Great Salt Lake…and, if you’d like, you can click on any photo in the following gallery to be taken to a slide-show that presents the images in a larger format. 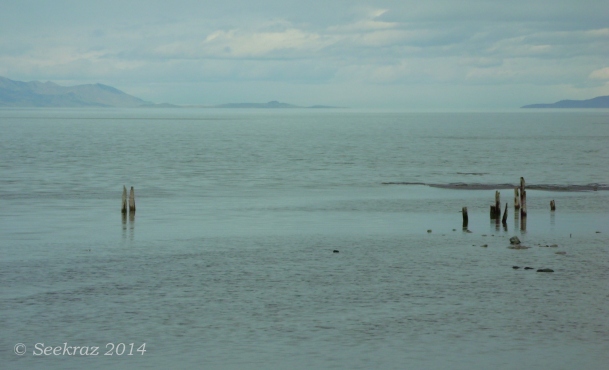 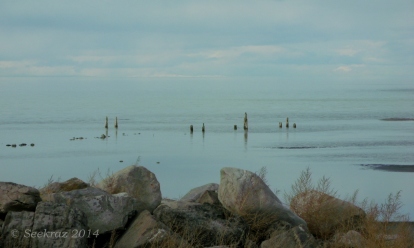 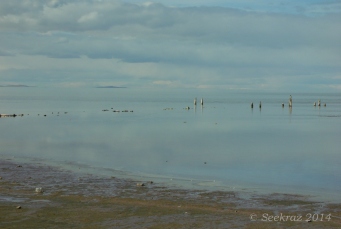