Today’s installment comes to you from the Black Canyon Trail, about five miles south of Bumble Bee Road, where I have finally had occasion to meet more than just a few dozen lizards, rabbits, and birds….

I was minding my own business, hiking down the trail, when I heard an instant of “noise,” and then the tell-tale rattling coming from somewhere nearby.  I immediately stopped in my tracks, looked all around me, saw nothing of concern, walked a few more steps down the trail and the rattling became fainter, turned around and walked back the way I had come and it became louder, passed a few more steps beyond the precise spot where this guy was hiding and it became faint again, and then walked back, peered into the brush, and saw him/her sitting pretty, just waiting for me to make a photograph.

The truth of the matter, when it comes to how the photo came to be, is that I was looking through the middle of the brush while holding the camera down at ground level and pointing blindly through the underbrush, hoping that something good would come out of it.  For only a moment, I considered lying prone in the trail to have a better view of the subject, but then thought better of it, and remained squatting there, pointing the camera and hoping for the best.  This is photo number five, and the only one that turned-out well.  I was surprised and thrilled when I got home, downloaded the photos, and beheld this little treasure….  And no, I was not this frighteningly close to the creature…the “zoom” function on my point-and-shoot camera is wonderful! 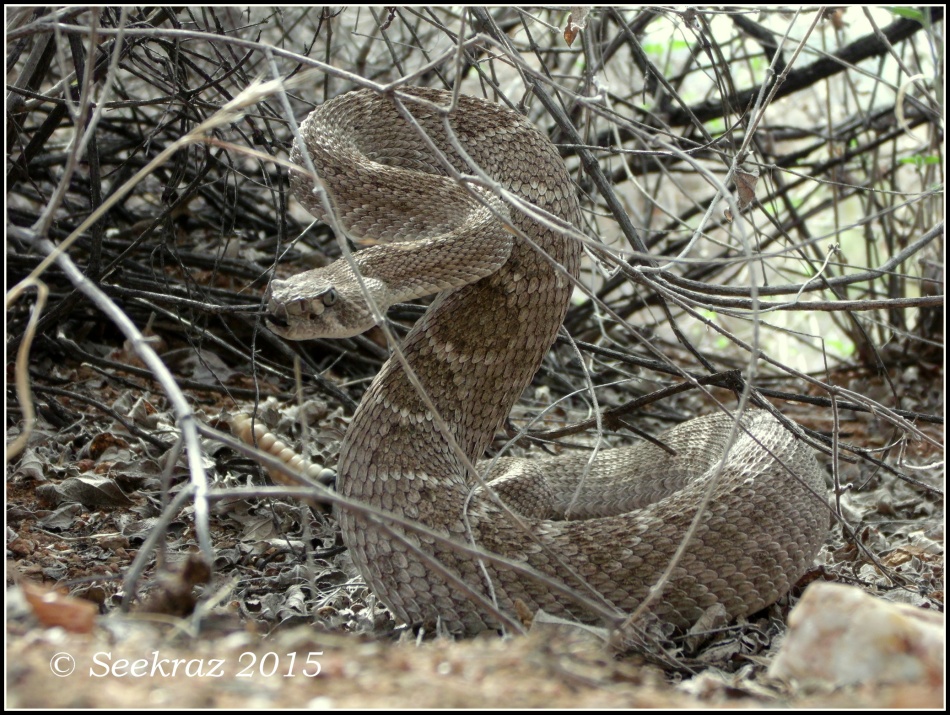 If you’d like to revisit the earlier post, “Making friends in Arizona,” where my Little One and I encountered our very first rattlesnake in the “wilds” of Arizona, you can click on the highlighted name to do so….