it’s there if you need it

Just south of the Glen Canyon Dam in Page, Arizona, there is a scenic overlook that permits visitors to have a fantastic view of the river below, as it has carved its way through the red/peach sandstone that used to be an ocean floor in eons past.  One can step past the protective guard rail and approach the literal edge of the earth, cliff-wise, and peer out and into the river’s chasm that is several hundred feet below.

The lines of the handrails and the ridges and scoops of the sandstone caught my eye when I turned to look back…a curious placement of such a thing when viewed out of context, but knowing where and why brings its meaning.  For those who are used to walking on uneven terrain, the walk down and back is not difficult, but for others, the railing is…there if you need it. 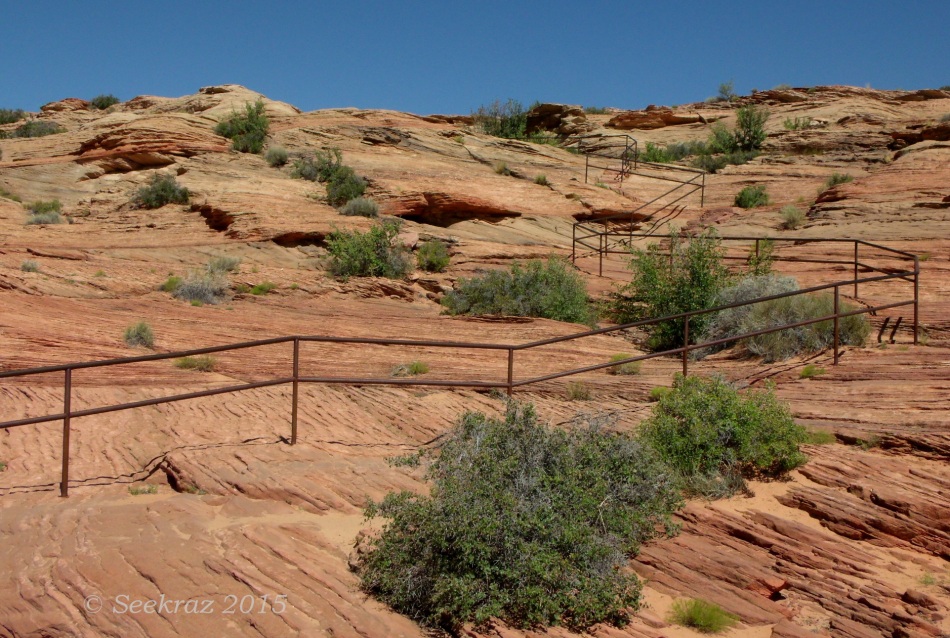 Anyone who has been following or visiting this blog for at least two years will know that I spent a few years hiking in both Big and Little Cottonwood Canyons of the Wasatch Mountains…just east of Salt Lake City, Utah…so it’s a bit of a departure from that norm for me to be hiking in Cottonwood Creek…in Arizona.  But, alas, here we are anyway.  I had researched hiking in or near Hell’s Canyon Wilderness Area and found a related post for hiking nearby Cottonwood Creek, something that was more feasible, given my lack of a four-wheel-drive vehicle that is needed to gain access to most of the wilderness area. 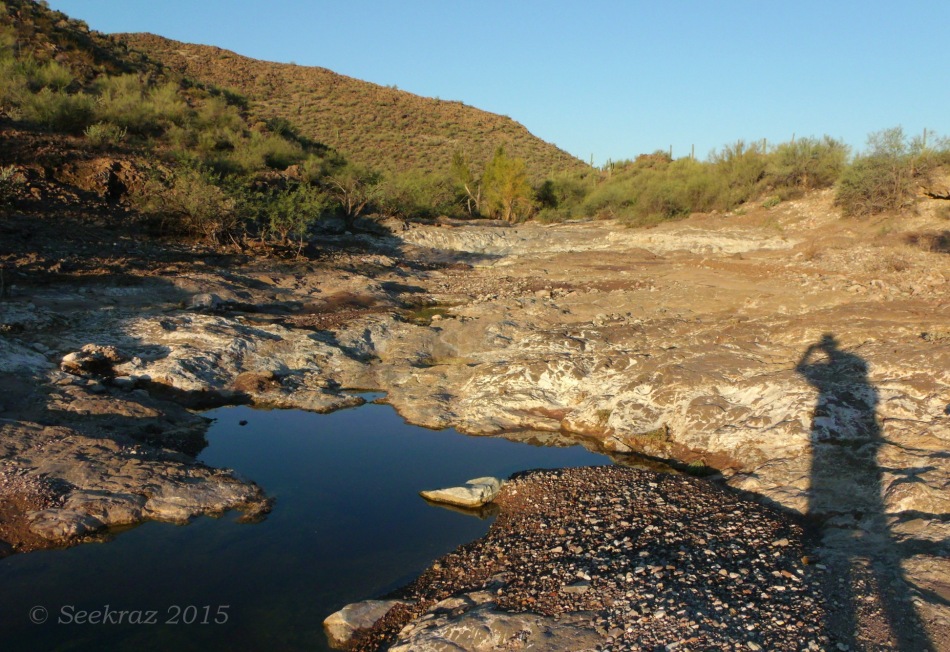 In the above photo you can see the shadow of the only person I saw for the entire five hours on the trail…. 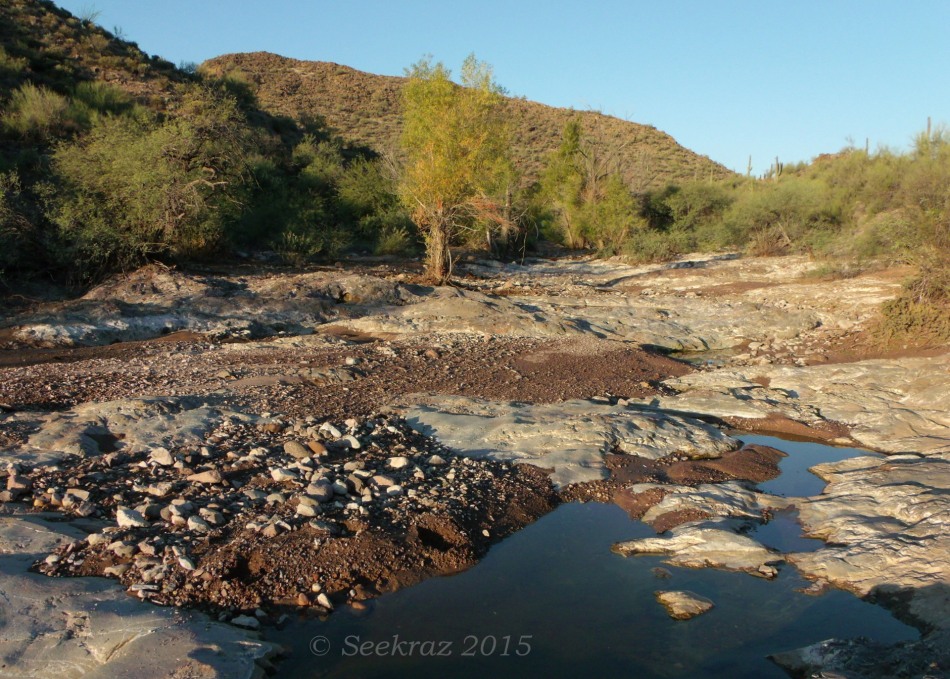 And in these next two photos you can see what a great majority of the trail looked like…it wasn’t a trail…it was literally the creek-bed…mostly wide open with easy passage, but at other places it was so congested with cacti and trees that I was forced out and up onto the bank where I occasionally found game/burro trails that ran parallel to the creek and still headed in the direction I wanted to go. 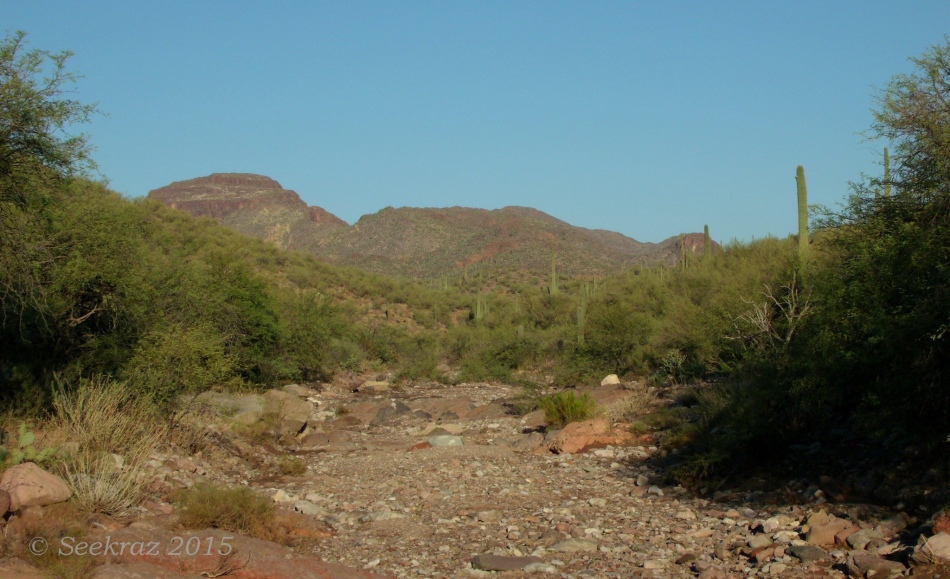 This was the first of my three “firsts” of this particular hike.  I had previously never seen a petroglyph while out hiking.  I was hoping that the center image wasn’t some type of foreboding message telling all passers-by to turn around and go back the way they came…. 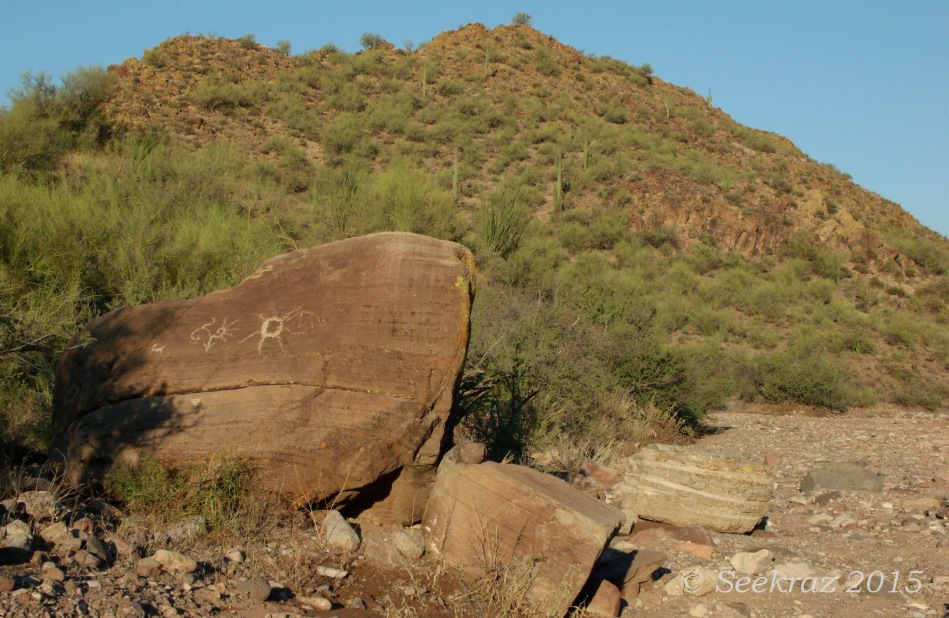 I’m guessing that these are raccoon prints…. 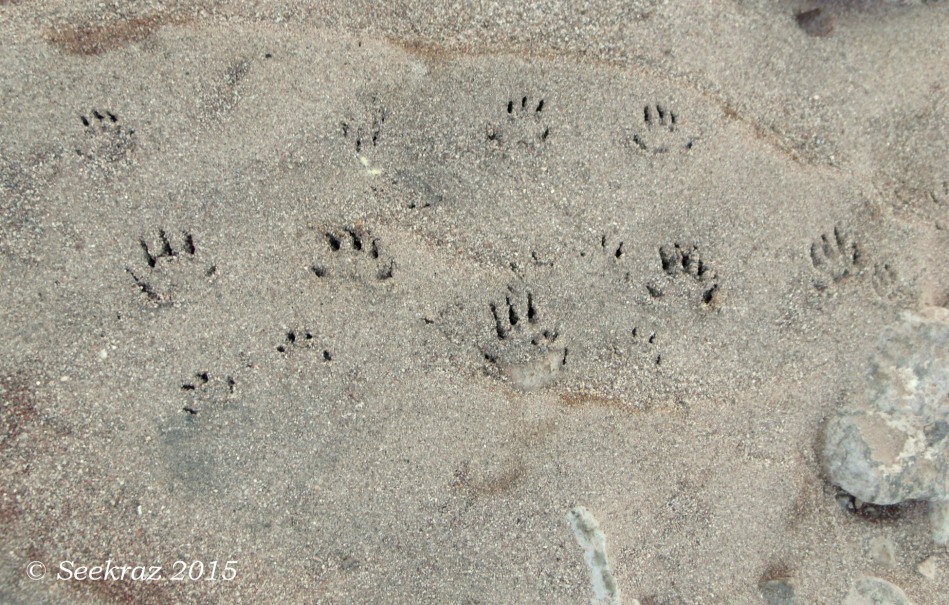 …and pretty confident that these below are coyote prints, given that there were no human footprints aside from my own since the last rain, so they wouldn’t be from a domestic dog. 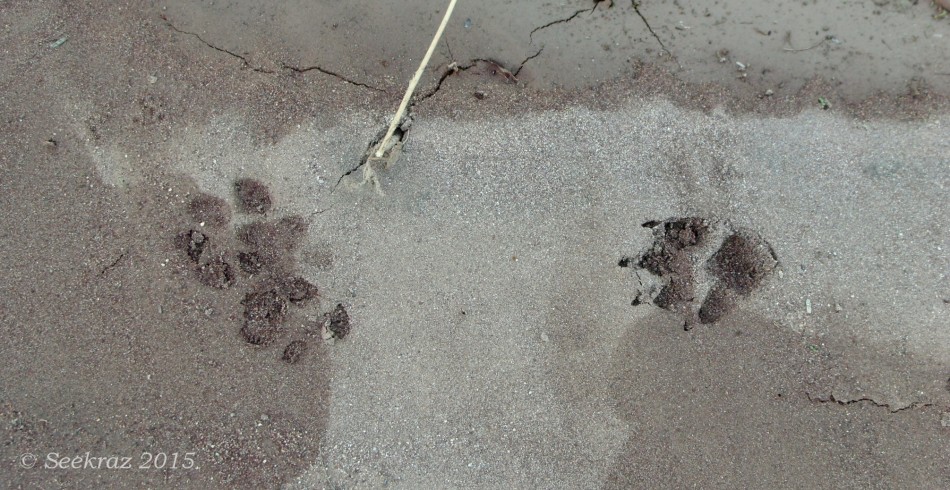 …and below, you can probably discern the form of a wild burro near the upper center portion of the image. 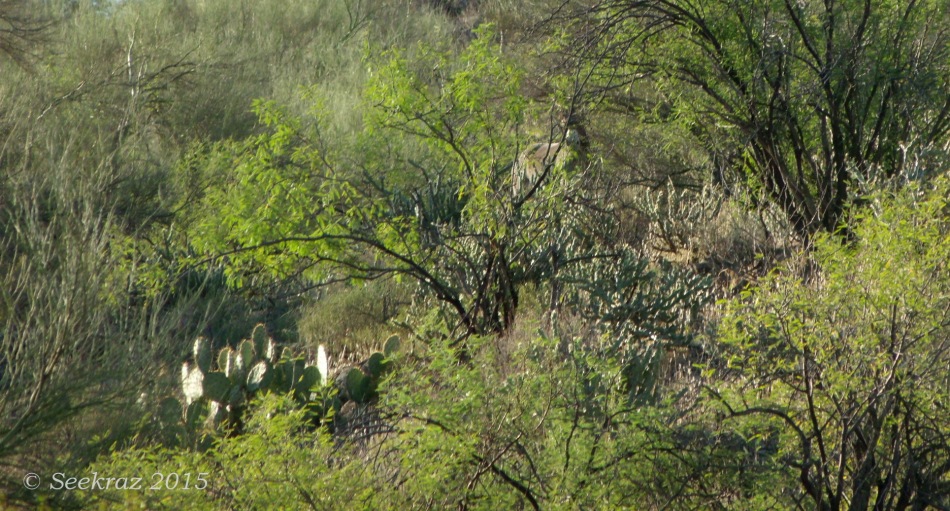 I was surprised to find so much yellow/green lichen out in the desert on this trip.  It was mostly on the red rock, the old sand-stone that likely retained water better than the other basaltic rock.  I also found some of the more typical flat gray lichen on some granite-appearing rocks, but that was not so unusual. 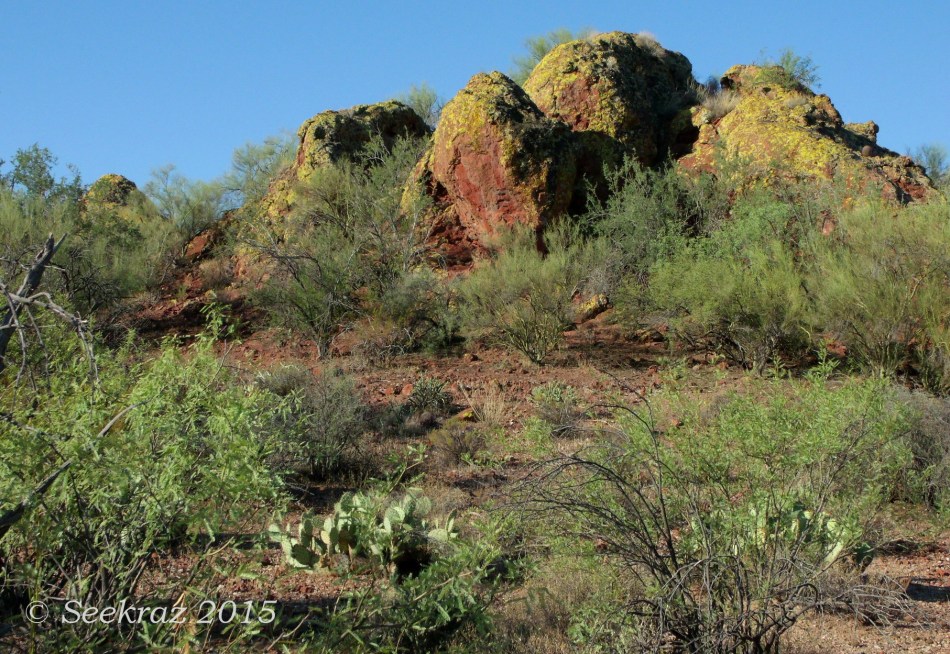 I found several examples of cacti growing out of the side of rocks or rock cliffs along the creek-bed, but this set was the most interesting. 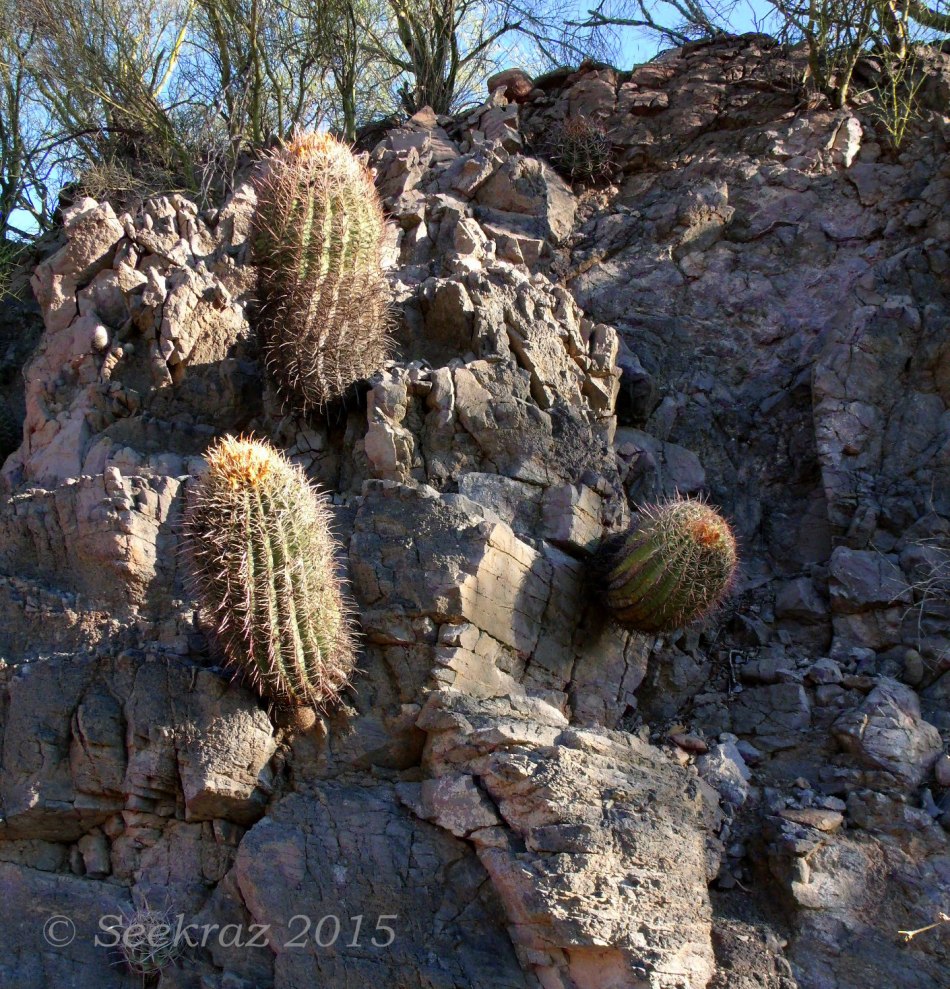 And here is a handful or cluster of the Fremont Cottonwood trees that give the creek its name.  After the first group of a couple dozen near the start of the hike (not shown yet), there was only another handful scattered along the way, this one being a significant grouping, even with its sparce offering. 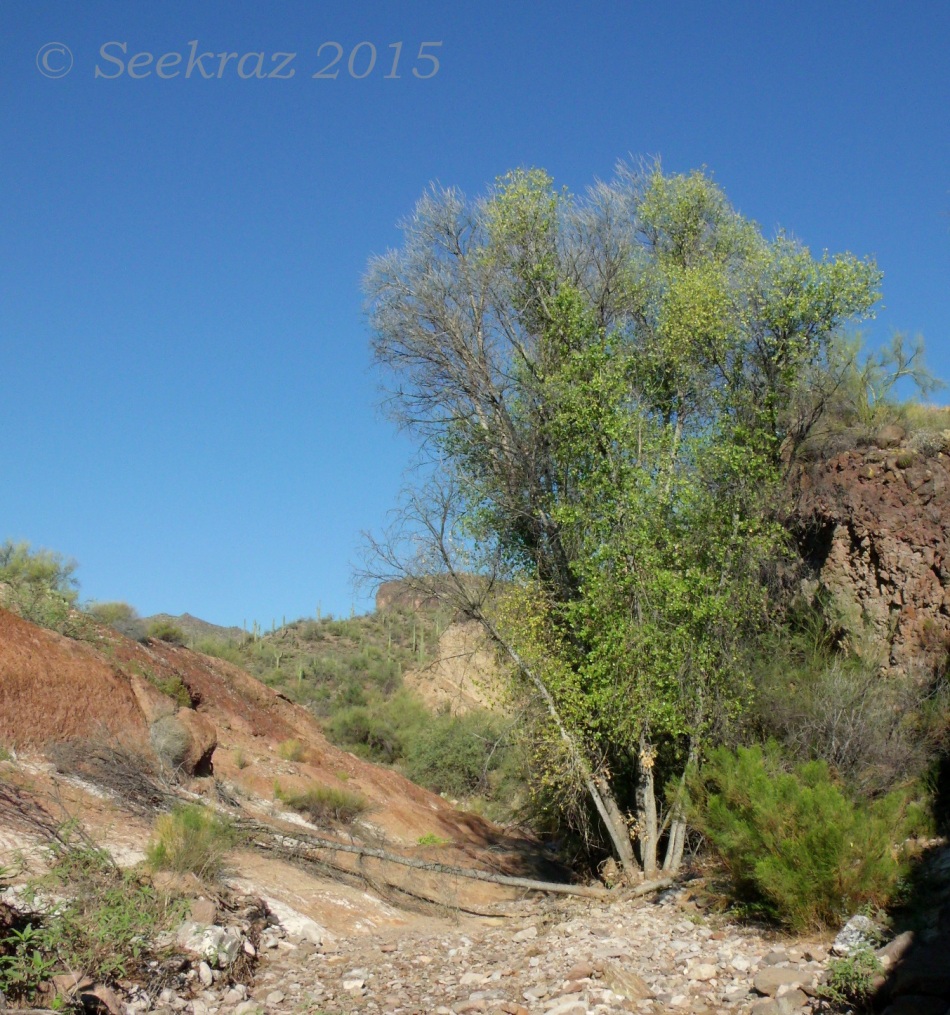 The following two images are of my second “first” for the hike…while I have caught a few night-time glimpses of Great Horned owls flying over my backyard, I had never seen one when I have been out hiking…and further, had never seen one, period, that was perched somewhere that would allow a closer look…or photograph. 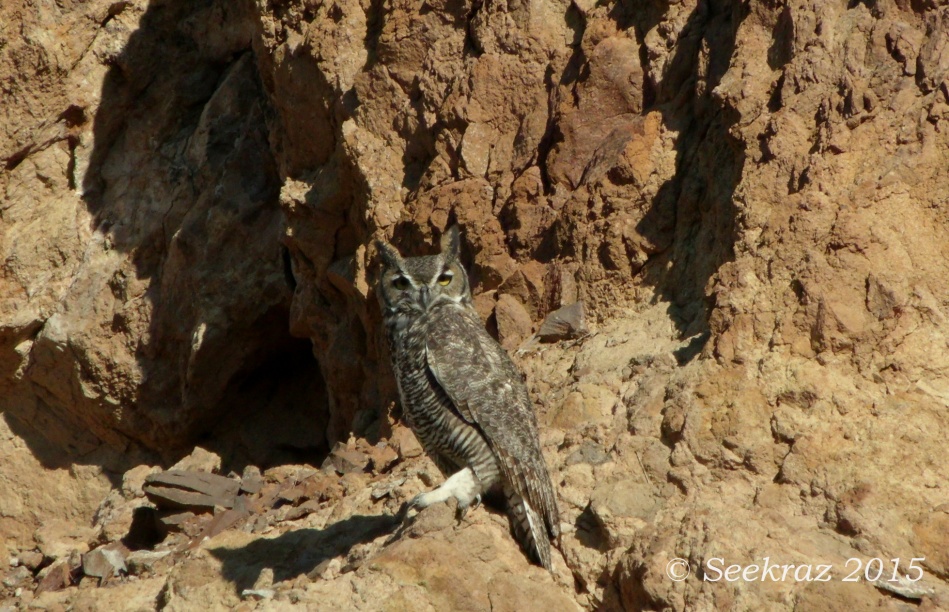 This second image might actually be of a another bird…it was coming toward me (not toward “me,” but in my direction) within seconds of my having seen the other one going off in the opposite direction. 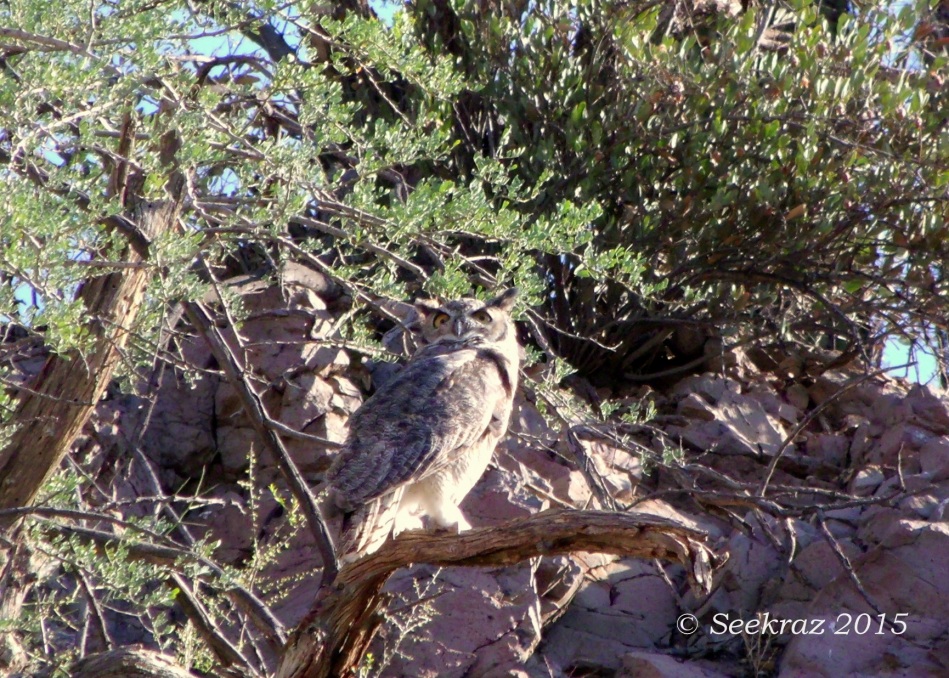 It was shortly after taking this next image that I climbed out of the creek-bed and up onto the ridge to the left.  The desert was easier to walk through and I still had the creek on my right the whole time, so it was easy to know “where I was” in the vastness of the landscape when it was time to head back.  I probably went another couple of hundred yards before finding a large enough Saguaro that provided enough shade so I could sit/stand for a while, re-hydrate, and make some photos before starting the return trip down the creek. 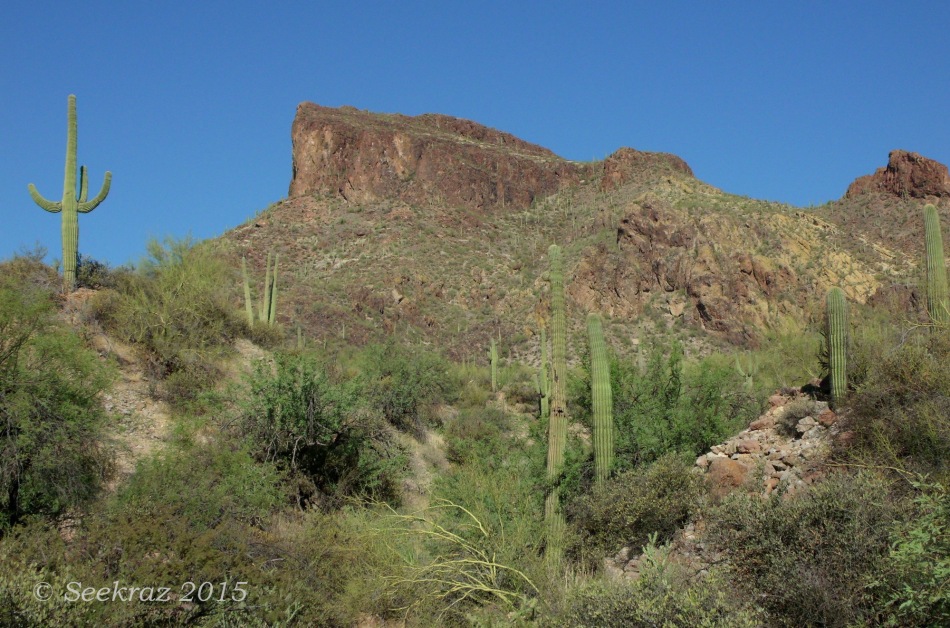 Facing southeast in the below photo, it was only about 9:30, so the sun was still shining aslant into the cacti spines, giving them their morning glow. 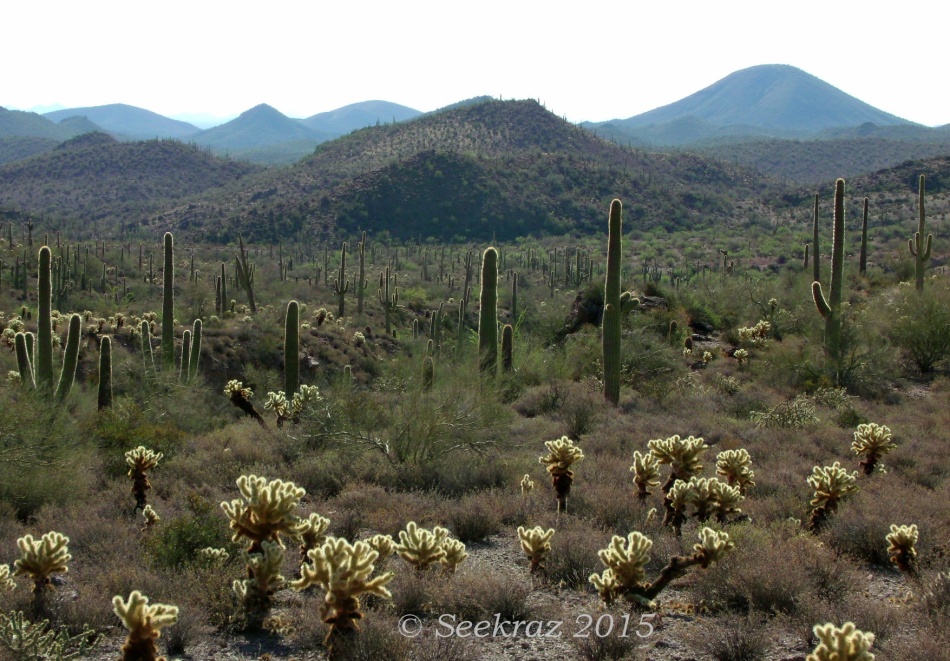 It wasn’t at this exact spot, below, but probably about a third of the way back to the truck, I heard the sound of a body crashing through the brush to the right of the stream, turned to look really quickly, and saw the rear-end of a brown something disappearing over the ridge.  When I turned to look back into the creek-bed, I saw a small Javelina exiting the bed and going into the brush on the left side of the stream.  I had thought the first body making it into the brush could have been a burro, as I had seen and heard one earlier, but after seeing the very distinctive pig body running the other direction, I would guess that the first body making it into the brush was also a Javelina.  At any rate, this was my third “first” of the hike…I had never seen Javelinas while out hiking.  It would have been sweet to have actually captured an image of one of them, but they were gone too quickly, so if you’re interested, you can click on the highlighted name above to be taken to the Arizona Game and Fish Department’s page on the animal. 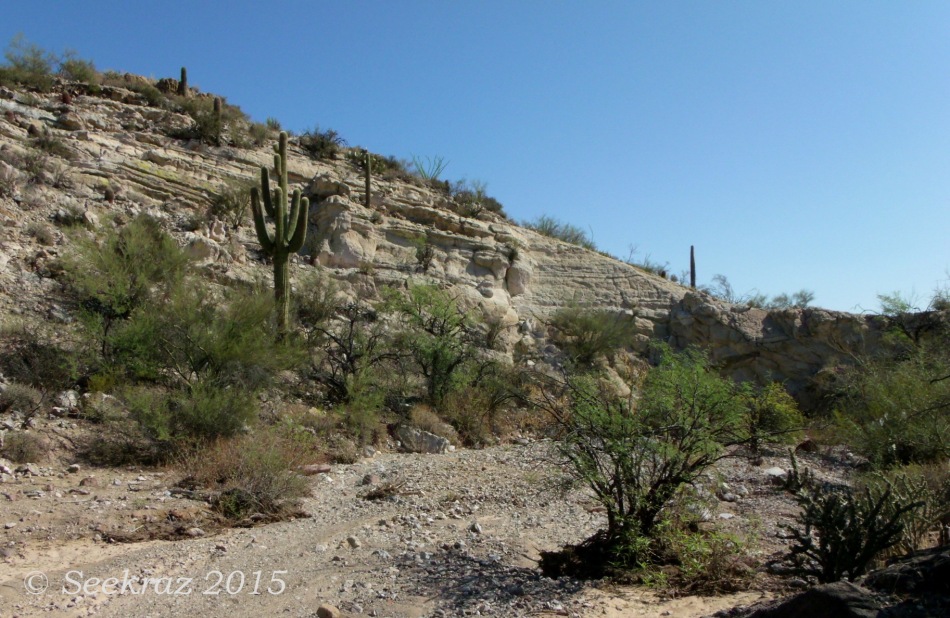 I don’t think this was the same burro that I had seen earlier, as this one was much darker…but it sounded exactly like the other one with the snorting noise that it was making as either an alarm or as a signal of its irritation with me. 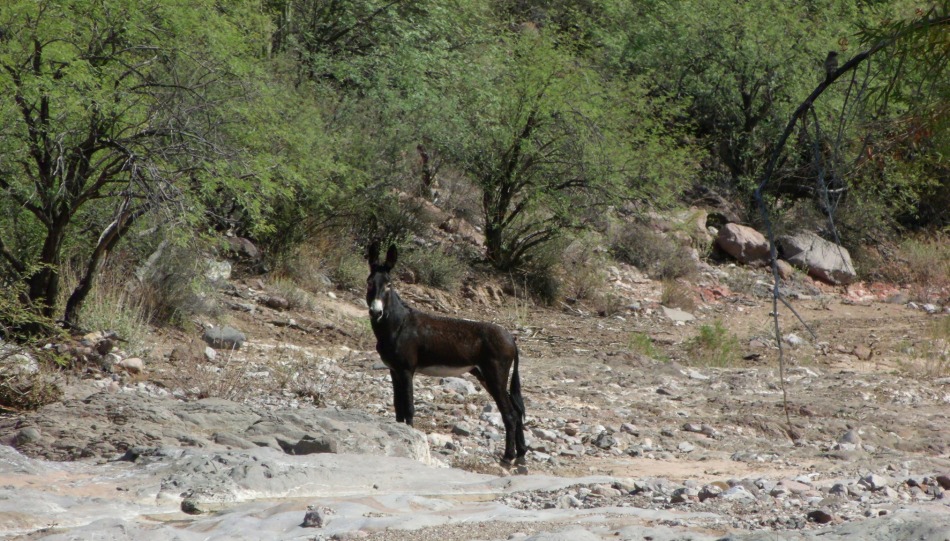 And lastly, this is the mass of Cottonwood trees at the beginning of the trail…but this is the view on the return, so they are not half in and half out of the sun, and therefore easier to appreciate. 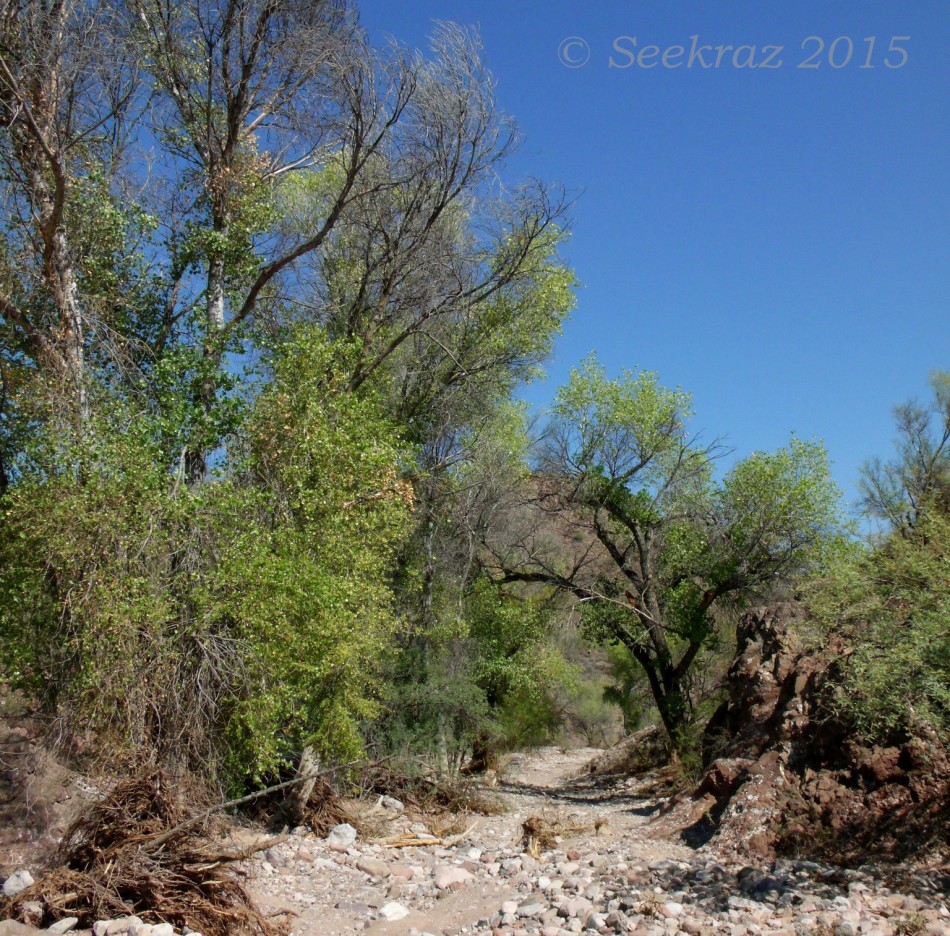 So…it wasn’t like hiking in the Cottonwood Canyons of the Wasatch Mountains in Utah, but it was still a good hike and a nice way to spend five hours on a Sunday morning.

Hillside Saguaros and Waves of Mountains

Looking east from near the headwaters of the mostly dry Cottonwood Creek, north and west of Lake Pleasant, Arizona. 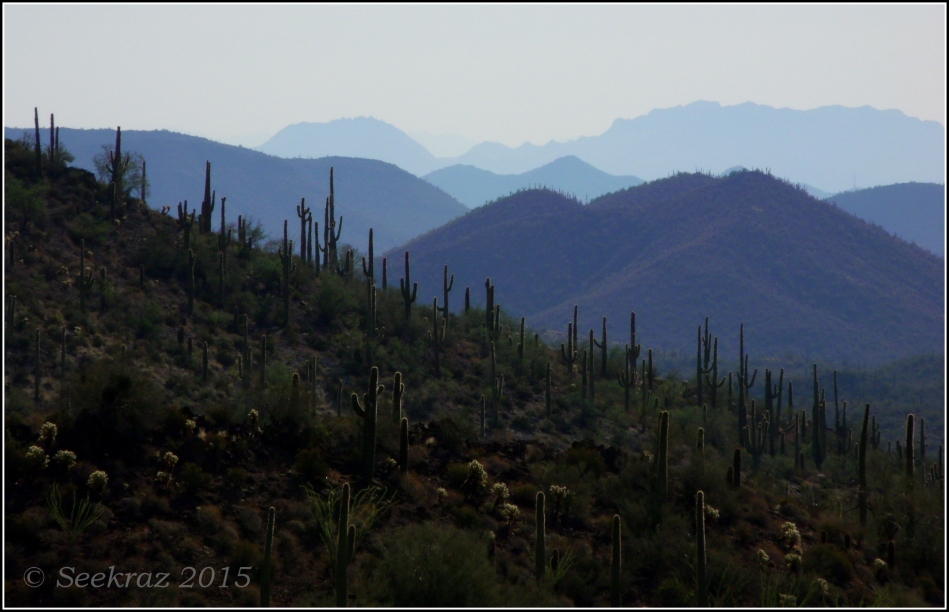 Found in an alleyway where people park their garbage cans so the collection service can do their thing and haul away the waste.  There was a stretch of decorated wall that ran more than 100 yards deep into the alley…the backsides of backyard walls in a mid-city residential area.  The art was created as part of Paint Phx 2015. 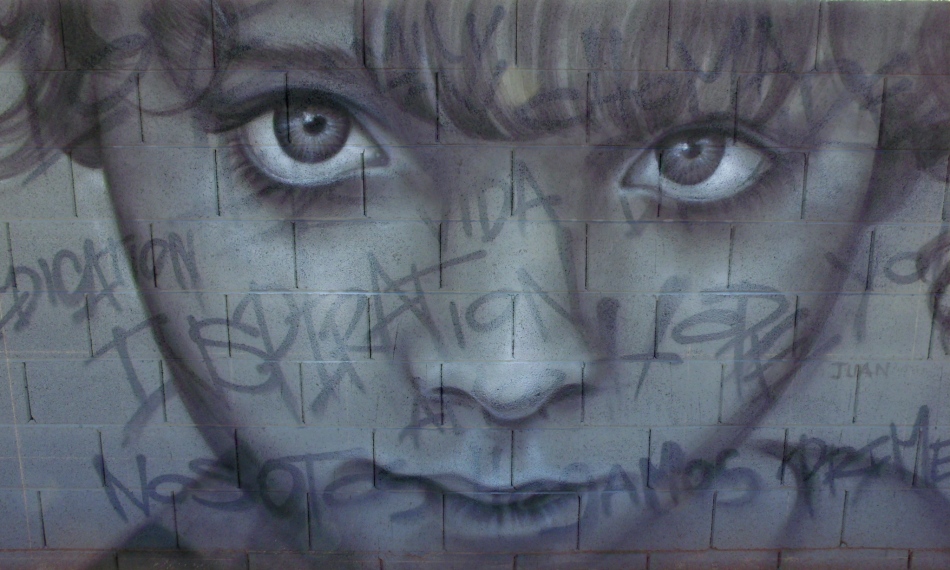