…the trail rounds rocky corners and hiding hills and rises gently from the desert floor as the sun eases from below the far horizon and lights anew this sharp and prickly land…the glow and flare inside the lens is equaled among the red spines and golden stems of cacti and brush and grass alike…the morning fire quietly waking the harshly coated earth…sweet light fading soon with the ascent of day…. 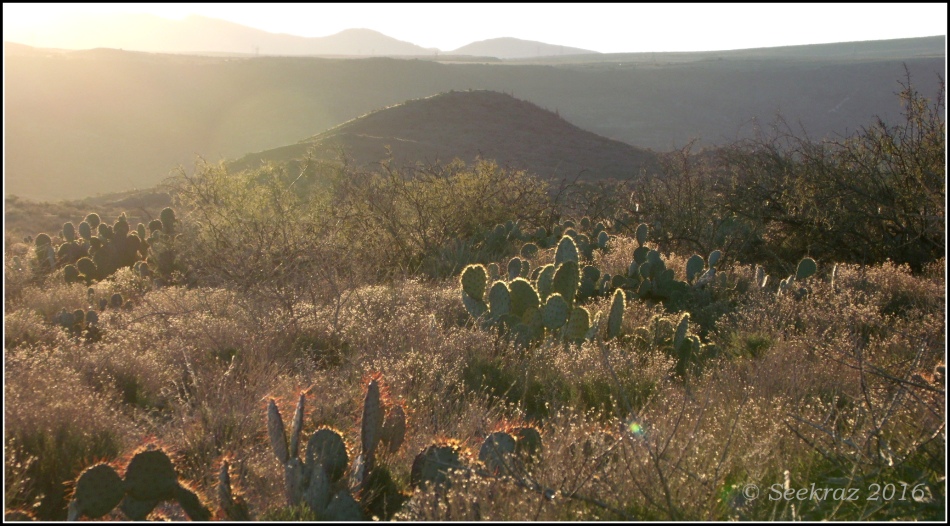 I’ve only been hiking about two dozen times since I moved back to Arizona almost two years ago, and all of the hikes have been on different trails…or on different sections of the same larger trail…with very little overlap of covering those sections, and on only one occasion, hiking the exact same trail.  When I was hiking in Utah, I covered many of the trails several times, five or six times, and even more than ten times on another two trails…they were compelling locations with easy and quick access, short drives from the house, where minutes later I would find myself in the woods…alone, or with very little company.

You might remember from various earlier posts that I’ve hiked several segments of the Black Canyon Trail…and on some of those occasions, I went past the “formal” or designated section’s length and continued onward for another mile or two onto the next section….this is some of the “overlap” that I mentioned above. 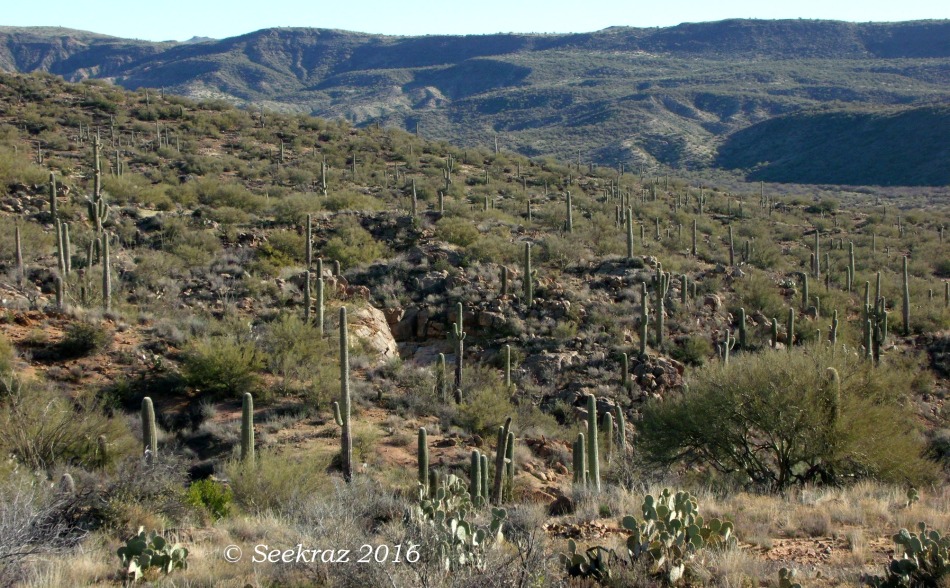 When I found myself about 100 yards to the left of the location on the trail where I made this photograph, I had an overwhelming sense, a physical knowing, that I had been there before.  It actually caused me to stop and turn in slow circles looking for something that was familiar…some landscape feature that was significant and placed somewhere in my memory.  I found nothing…there was nothing that I recognized…and I can usually recall sections of most trails that I’ve hiked, both here and in Utah…the stuff just gets cataloged away, mental images….  Anyway, I “felt” that I had been here before…and I’ve never “felt” that way before when out hiking.  Yes, certainly, I’ve visually recognized and absolutely “known” where I was out on hikes that I had made before…but this is the first time that I “felt” or physically “sensed” that I was somewhere where I had been previously…but didn’t visually recognize….so it was odd…strange…made me wonder about juju and voodoo and other related and unrelated things.

Maybe it was a physical memory as a trauma response to the last time that I was at this location…at the spot right there in this image.  I had hiked north to this point…and then went off trail to go exploring in what looked like the chute or body of a rock-lined water-course and water fall…the point that you can see immediately to the right of the large light-colored rock that is just left of center in the image.  I went off trail…something that I don’t do unless I leave a note saying that I’m going to do it…something that maybe I shouldn’t do, shouldn’t have done…something like that.  But…I did…bush-whacked it right through the desert and climbed over the associated boulders and scree, balanced on shifting rocks with my full back-pack…and then there was a buzzing and flying creature screaming into and around my face, darting at my eyes, nearly clinging to my glasses with wings flashing and whining face-close and loud…my hands swatting at the winged-beast, trying not to knock the glasses off my face…and finally, the bastard landed next to the outer corner of my right eye and JABBED its stinger into my face flesh and then its poison or toxin lightning-darted and ran and flew through the nerves and up into my scalp, Real Lightning Darts, not any of that fake shit you see on TV or read about in pulp magazines…but the real stuff, right through the muscles and upward…screaming WOW WOW WOW!!!!!

So…after I steadied myself, assessed the minimal damage to my confidence that I was really somewhere that I should have been…realized that my eye wasn’t going to blow-up…realized that I could still see…with just a little bit of blur…I sat on a rock, had a bit of water, and then continued my explorations….cautiously…listening….watching.  There were no hissing and rattling snakes or attacking Gila Monsters…no circling round of buzzards aloft overhead…and no banjo-playing hill-billies…..just a dried desert waterway that hadn’t been visited by any creatures that would have left tracks since the last rainfall.  After looking around in the wash and making a few photographs, I climbed back up the hill to an area close to where I made this image, and then continued up the trail, still heading northward, the same direction I was going before stepping off the trail to go exploring and getting my face stung.

I think my spirit of adventure had been abated somewhat…and I didn’t actually continue very far up the trail.  I had already gone more than a mile past what I had planned, so I did a 180 and then started back to the truck.

In my post-event analysis of this experience of “feeling” that I had been there before without actually recognizing it, I think that this must have been where I turned around…where my body decided for me that it was time to go home…that my still hyper-alert mind had probably cataloged the whole surroundings and then recognized them before my conscious mind did when I returned to the place while hiking south from a different trail-head….some seven months later.

The Palo Verde trees are in bloom…everywhere, if that’s not too broad of a term…and the wind-blown flowers are scattered…again…everywhere…like a spilled bag of popcorn…with extra butter.

Image made with iPhone. 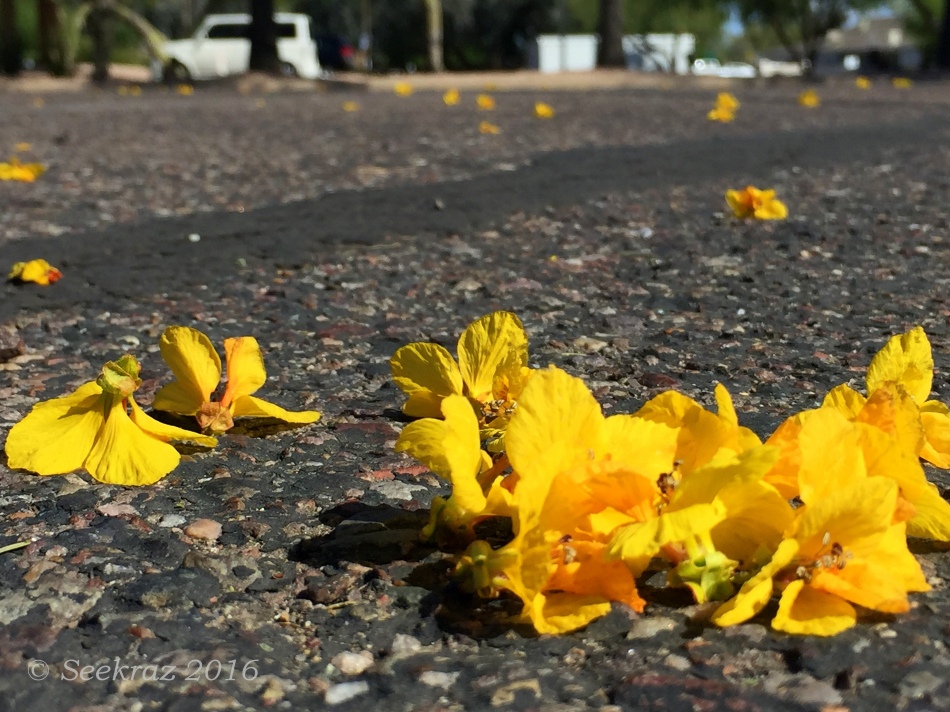