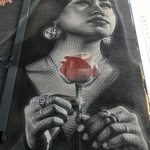 If you have been following the blog for some time, you might recognize the art/artist presented in this current installment of City Paint Phoenix.

The artist goes by the name of “El Mac” and he has painted murals all over the United States and across the globe.

I have shared images of his other works on at least six other occasions…which you can find by scrolling to the bottom of this page and clicking on the Category, “Street Art – Graffiti,” or by simply clicking on the highlighted link.

As you can read in this article in AZCentral.com, the image is based upon an actual person, a teenaged Native American girl who lives on the Salt River Pima-Maricopa Indian Community, which is located just east of Scottsdale.

For those of you who live in, or are going to visit the Phoenix area, you can find the 45 foot tall mural on the southeast corner of the building at 111 W Monroe Street, just one block south of the better known Van Buren Street, and one block west of Central Avenue, in the heart of downtown Phoenix. There is metered parking on the north side of the building, but if you’re only going to be there for a few minutes, you could probably get away with parking in the alley on the south side, as I did. A security officer came out of the building to check on my truck parked in the alley, but he just smiled, said “Good morning,” and then walked away as he saw me with my camera admiring the mural.

El Mac painted the main feature of the mural and his friend and collaborator, Breeze, painted the decorative trim that we see in brighter colors surrounding the mural and extending around the building and down the walls.

After viewing the mural the first time and having taken multiple photographs with my phone, I purposed to return the next morning with my camera to make some “real” images, which I did.

I should also add that I left the scene that first morning with something of a lightness of spirit…like an inspiration or a feeling of calm…like it didn’t matter that I still had to go to work for eight hours and be stuck inside an office or talk to people with whom I really didn’t want to talk…it was okay. I was further touched each time I got out my camera during the day to look at the images again and again.

…or maybe I was still awestruck from having been in the presence of a simple beauty that transcended even the need for words to describe it.

a flower in the trash**

A good friend and former coworker gave me an orchid plant a few years ago…four years ago in January, actually, when I returned to work after being out for a week when my mother died.

The plant was in a small dark reddish/maroon ceramic cup and had four broad, intensely green leaves and two vines or stems that were about six to eight inches long/tall and had anywhere from eight or ten flowers on each…I don’t remember exactly…

After a few months of “watering” it with crushed ice a couple of times a week, I found that I just couldn’t keep it watered enough and that the ice just melted and ran straight through the cup and the flowers wilted very soon and the broad dark leaves went soft and then stayed that way.

Not too long after that, I purchased a much larger pot and a bag of Miracle-Grow-infused orchid bark and repotted my little plant.  When I removed it from the smaller cup, I found that there were “tons” of root material curled into a huge twisted mass at the bottom of the cup, something that I sadly trimmed away and discarded in the trash…but it had to be done.

And now, four years later, I have seen a second plant grow up from the bark and sprout its own four leaves and two vines or stems with their many flowers, sometimes it’s hard to keep track of them all, 15, 18, 20….  My morning routine each day at work is to stop and greet the plant on the window sill near my desk.  I gently rub the dark green surface of the uppermost leaves, maybe rotate the planter to make sure the flowers aren’t touching the glass, and whisper “Hello,” something that seems silly as I type it here, but seems natural and only right when I do it every morning.  I think I probably perform this ritual to honor the plant’s life and the trust it must have in my routine to care for it…and to likewise honor the friend who gave it to me, his compassion and empathy, and to remember my mother, to acknowledge her continued presence and absence and all of the things I could and don’t say about that.

And it is now my weekly routine upon coming back to the office on Mondays to trim/pluck the flowers that have wilted over the weekend…and so we have this post. After I tossed the single flower into the trash a couple of weeks ago, went about my new morning at the desk, and then happened to look down into the trash. I was struck by the color and textures of the wilted body and leaves in its surroundings of the clean clearish-white trash bag…and was reminded immediately of some images that my blog friend, Lynn, has shared with us at Bluebrightly, particularly the ones of leaves and flowers pressed against the inside surface of a green-house’s windows or plastic tarpaulin partitions…the texture and form and light all combining to give us another micro-celebration of awe and wonder at the event and the artist’s eye and mind and heart to find it and capture it so.