It’s always pleasing when a recommendation (direct or otherwise) from a friend results in a rewarding experience.  About two weeks ago, Fergiemoto commented on my Salt Lake City Seagull post and mentioned that you can see LOTS of sea-gulls on the causeway that leads from the mainland to Antelope Island out in the Great Salt Lake.  As I have lived in the Salt Lake area for just over a year and had not yet ventured out to visit the lake up-close and personal, let alone traveled the 40 miles north of the city to visit Antelope Island, it seemed like a good time to do so.  It was a rather chilly and windy February morning and afternoon, and while there were plenty of birds flying about and resting in the lake’s water, I have to admit that I didn’t take particular notice of the gulls…there were too many other things that captured my attention and begged for me to stop the truck and take their pictures.  Anyway…thank you, Fergiemoto, for your recommendation.  It was a wonderful day-adventure.  🙂

Antelope Island is about 15 miles long and 4.5 miles wide and is the largest of the six or eight or more islands that exist in the Great Salt Lake.  This photo was taken on the road that lies on the eastern side of the island and leads out to a farm/ranch near the north end of the island that was originally established in the late 1800’s.  Even though the island is smack-dab in the middle of a lake that has greater salinity than the oceans, there are more than 40 fresh-water springs on this eastern side of the island that serve as water sources for the natural and imported wild-life.   Aside from the prong-horn antelope, from which the island gets its name, there is also a herd of more than 600 imported buffalo, or American Bison, that roam freely over the island.  There are also long-horned sheep, mule-deer, bob-cats, coyotes, and many ducks, gulls, other water-birds, and raptors.  The state-park literature also reports that Bald-Eagles frequent the island during their seasonal migrations.

We didn’t spot this antelope until we were actually leaving the island.  As I got out of the truck to take the photos, I heard him making some barking-type sound…almost like he was calling to his friends to come back.  A cyclist who had also stopped to look at the antelope and listen to his calls said that this particular antelope was a male, as only males have the black cheek markings and a bit of a mane that runs down the middle of the neck. 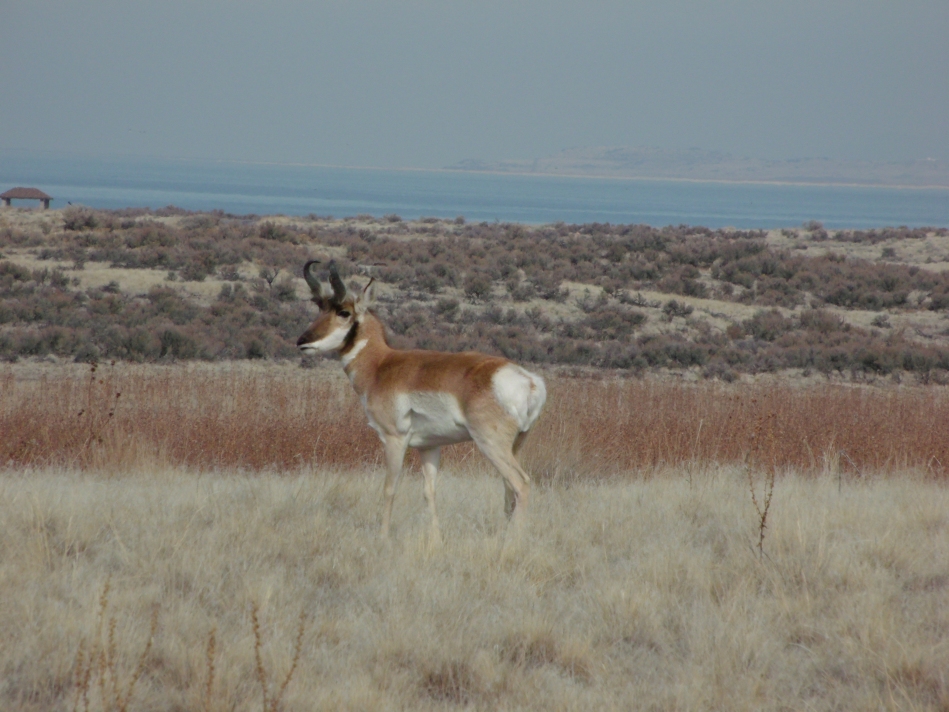 I think it’s remarkable that we could be on an island in the middle of the Great Salt Lake and see buffalo resting in the tall and winter-dried grasses.

The boys were eager to get out of the truck and climb the rocks…having fun with their own little adventures and seemingly mindless of the chilling wind.  There was a bit of haze on the lake…maybe an inversion layer of vehicle particle emissions…or salt dust carried in with the winds from the desert south and west of the lake.  Those are the Wasatch Mountains in the background. 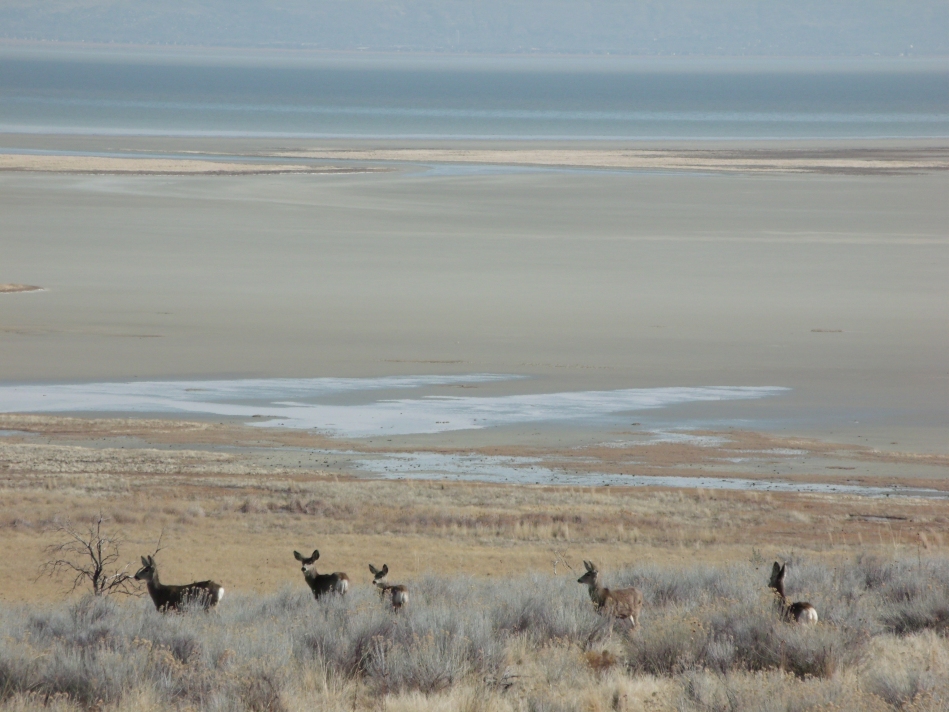 When I mentioned in my earlier post, Mass and Form, about trying to get a good profile shot of the bison/buffalo, this is the closest and best that I could get.  He kept moving in circles away from me….

Everyone had a nice time driving and walking about the island…even my 3yo grand-daughter.  This last photo was taken near the farm/ranch on the north end of the island.  You can see that the winter grass has been mown beyond the fence.

I Found a Frozen Waterfall

I heard somewhere that adventure seekers often participate in the winter sport of ice-climbing in Little Cottonwood Canyon, just east of Salt Lake City.  I knew that there was at least one set of falls in the canyon, Lisa Falls, but had never seen it in the winter, so I couldn’t imagine what it might look like.  Today, as I was hiking through Little Cottonwood Canyon, I happened upon an odd trail that led off into the woods, away from the main trail that continued for almost three miles and terminated at the ruins at the far end.  Since I had started my hike late in the day, I figured I would follow the trail and explore a little more of the canyon that I hadn’t seen, instead of continuing on toward the ruins at the end of the trail.  The well-worn trail led to the base of a frozen waterfall…and I could still hear the water from the moving and living stream beneath the ice.  I will have to return to this spot after Spring returns so that I can see the wonderful waterfall in action.

This was the first glimpse I had of the falls –

After a few more minutes of climbing, I reached the base of the falls, a sheet of ice covering a huge rock…and strangely, I could see the water still “flowing” under the ice at the far left edge –

I had to move around a bit on the side of the mountain in order to find a better, or more complete view of the falls.  It appears that there are essentially three segments –

When I was standing at the base of the falls, I noticed a backpack sitting against one of the trees.  I hadn’t seen or heard anyone on the trail above me when I was hiking up toward the falls, so I imagined that there must have been someone above me.  His red coat made it easier to spot him with my camera –

I had to move to still another location, more to the left of the falls, in order to get a better picture of the upper section of the falls –

And then with the fantastic zoom lens on my new camera, I was able to see the greater detail of the upper section of the falls…quite amazing, actually –