I was heading west on County Highway 85 (MC85 for any locals reading along), also named “Buckeye Road” in its eastern environs, going toward the town of Buckeye, where I hoped to find someone who had some positive test results and was in need of medication. 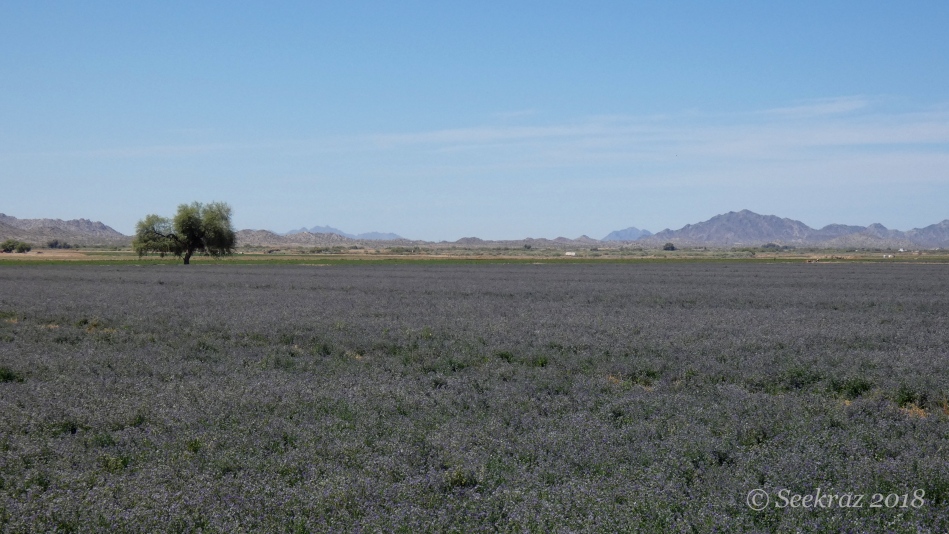 My work with the health department takes me to various corners of the county…all of them over time…so I get to go places and see things that a “normal” office job likely wouldn’t provide.  Sometimes I go to jails, city parks, transient camps, doctors’ offices, hospital emergency rooms, or psych wards…and other times I’m actually out “in the field.” 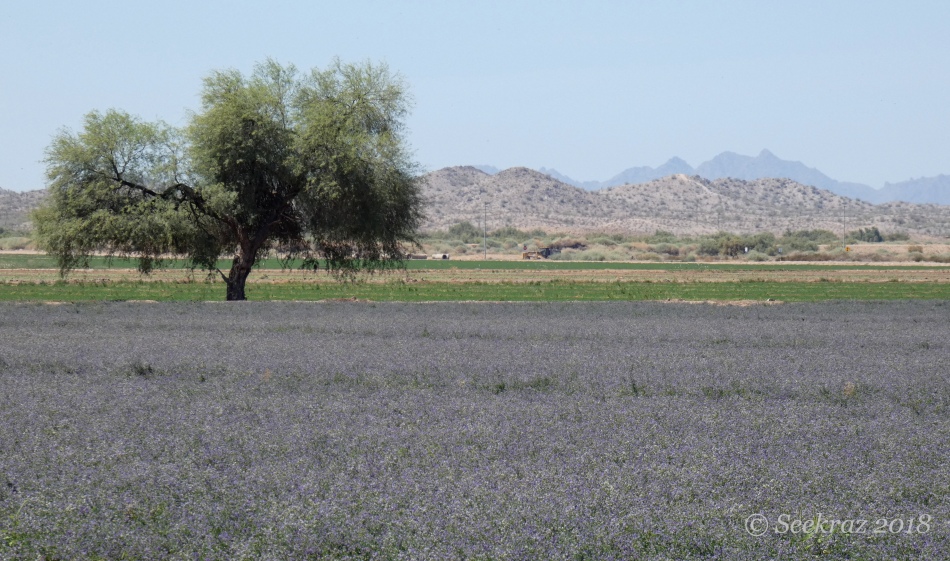 The US Department of Agriculture’s “2012 Census of Agriculture” (the most current one I could find) for Maricopa County, Arizona, provides that there were 2,579 farms consisting of 475,898 acres of land at that time.  Those numbers reflected a 38% increase in the number of farms and a 2% decrease in acres of land since the previous census, dated 2007.  I provide all of that to simply state that there remains quite a bit of agricultural land in the County, with most of it being situated on the outskirts of the more densely populated areas. 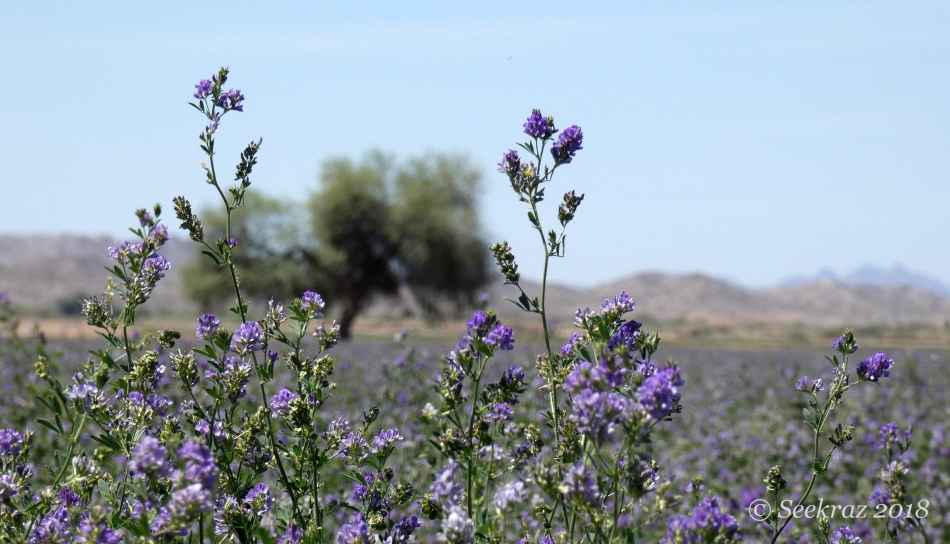 For those interested, this Wikipedia article provides that Maricopa County has a total area of 9, 224 square miles, is 132 miles wide from east to west, and measures 103 miles from north to south…it has a greater land mass than seven states, is the fourth most populous county in the USA, and has a population of 4,307,033 (2017), which is greater than that of 23 states.

I took my camera to work with me on this particular day because I was hoping to make some photos of the melon and corn fields that are near my home, on my way home from work…when the light would be softer with the setting sun, etc…so I had it with me when I was in the field driving hither and yon…passing field upon field of corn, cotton, hay, onions, and alfalfa. 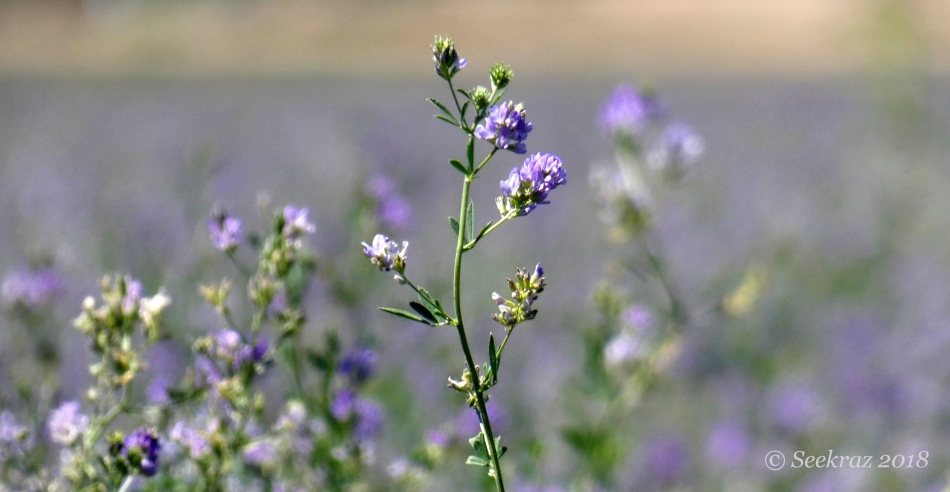 A five minute stop on the way to Buckeye allowed me to get down and personal with a surprisingly fragrant field of alfalfa at about 10:30 am on a day that was supposed to get up near 115 degrees. 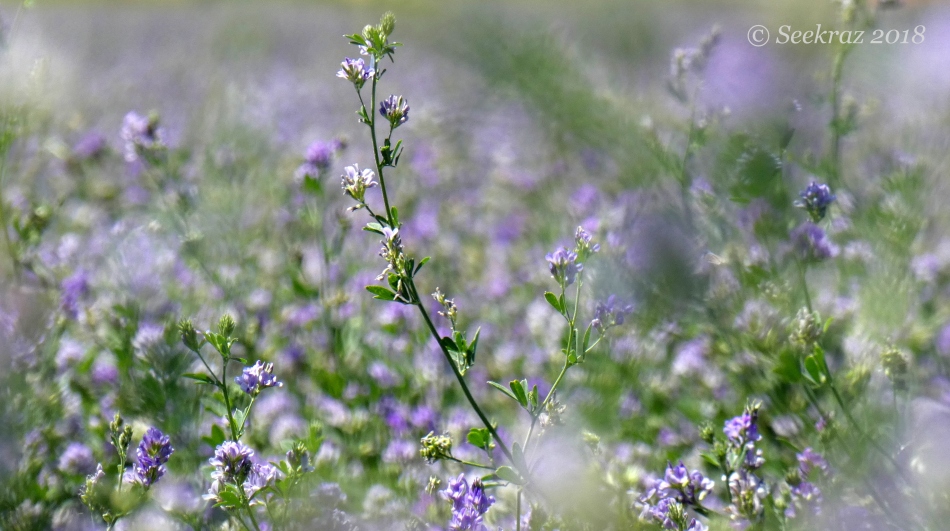 I found the address, but not the person I was looking for when I made it to Buckeye…

…but I did bring back some unplanned bounty in the way of a few photographs…and testimony to the fact that Arizona farming can yield beautiful results!

Panning east to west and proceeding minute by minute, this was the view from the side of a road less than one mile from my house last evening.

I’ve mentioned before that I live in the far northwest corner of the “Valley of the Sun” that is Metropolitan Phoenix…the pan of desert that through the miracles and science of hydrology and irrigation, comes alive with great expanses of nearly unnatural hues of green that we don’t expect to find in places such as this.

The foreground is dominated by watermelon fields, the dark line with the golden cap beyond the field is ripening corn, and then you see the edge of a neighborhood to the left (east), and then the Estrella Mountains in the distance.  There are hiking trails on the right (west) end that are similar to the ones found in the White Tank Mountains that you can see in the last photograph below. 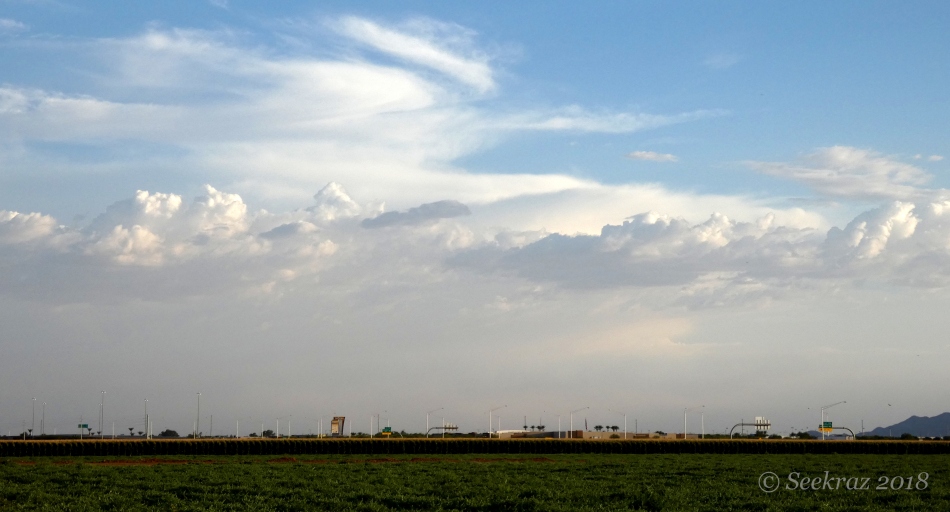 The trails are part of the offerings in the Estrella Mountain and White Tank Mountain Regional Parks, which were created and are maintained by the Maricopa County Parks and Recreation Department.

Making photos of this area has been on the agenda for the last couple of weeks…as the softer light of the setting sun make for more appealing images.  The clouds were not expected, but greatly appreciated.  They are an early indication of the approaching monsoon season, but have yet to do anything more serious than add to the humidity and cause desert hearts to long for rain.