Did you just call me a slob…again?

We were sitting on the couch, my little one and I, with his mom on the love-seat across from us, watching a movie.  We had a bowl of popcorn between us, and as my little one reclined into one of the pillows, he took handfuls of the popcorn and not so delicately or accurately plied the fluffy stuff into his mouth.  When the majority of the bowl was gone, he started playing with the pieces of popcorn, alternately flicking them into his mouth or smashing them in his palm and then licking-up the pieces like a dog.  We paused the movie occasionally to ask or answer a question, to run to the bathroom, get a refill of one of our drinks or the other…and then continued watching and eating and enjoying the movie and each other’s company.  The further into the bowl we got, the more broken pieces of popcorn there were on the little one’s blanket, pillow, pajamas, and surrounding couch area.

I reached over to pick-up some of the crumbs and broken pieces to put them back in the bowl…and made a mistake….

“Do you think you’re making a big enough mess, you little slob?”

Did you just…call me a slob?

My little one asked this with a quivering chin and downcast eyes as he picked a piece of popcorn off of the blanket beneath his chin and placed it anxiously into his mouth.

There were big alligator tears and an immediately running nose and the sobbing of words and half words that I couldn’t understand between his crying and the movie and his mom and my questioning and….

And more tears…and my heart was breaking at his breaking heart and I couldn’t believe what I was seeing, and oh….

“Hey, Buddy, look at me,” as I patted his foot, “I was only playing…you’re making such a mess here…hey…look…I was only playing.”  I reached over and dragged him to me….  “Hey…I call your mom a slob too, sometimes…when she makes a mess…I wasn’t trying to be mean….”

And his chest was shaking and he was wiping tears across his face and his mom brought over a Kleenex to blow his nose…and I was holding back a smile in my amazement and tears in my sadness at how I had just crushed his little heart…his daddy calling him a slob.

“Hey there…why are you crying?  I was only playing….”

“I’m sorry…I’m so sorry, Buddy.  I wasn’t trying to hurt your feelings or upset you…I was just playing with you.”

An important aspect of my little one’s life and existence, at this point in his eight years (now eleven), and possibly for many more years as he learns to decipher and remember the various meanings of our vast array of socially constructed and freighted expressions and intentions and nuanced meanings, is his acceptance of things as they are presented to him.  He doesn’t see the gray or shading in many of our words and intentions.  The idiosyncrasies of our speech and the subtle and not-so-subtle meanings of our paired words sometimes escape him, even when we’re joking around…they mean, to him, what they literally mean.  In my playing, I forgot about the concreteness of his brilliant little mind…and the tenderness of his easily broken heart.

We all have our tool-boxes for our trades and professions…some of us might have literal boxes with the known tools of screwdrivers and hammers and levels and wrenches…bottles of oil that shoot smoke into engine compartments that help us find leaks in hoses, or figurative boxes with our paint brushes and palates, pencils and erasers, thumb-drives, bags with cameras and lenses and film (maybe), reference books, mortars and pistils, surveying chains, books of flight plans and maps, stethoscopes and syringes…or whatever.   And some of us have other things…like years and years of advanced education and hundreds of books…and hundreds of toys…things that stimulate minds to thinking…or relax them from their stressors…things that unknowingly open the doors of others’ minds so that those who are interested in helping them can finally see inside, can finally see the things that have been hidden for so long…because they didn’t know how to open those doors and windows on their own.

My wife is one of those people who has a tool box that contains those many years of education and hundreds of books and hundreds of toys…and who is skilled at opening minds and helping the bearers of those minds to find ways of expressing themselves…helping them find ways of communicating even with themselves…and then drawing maps for the rest of us to follow when trying to understand those minds so we can enter and share their previously closed-off worlds.  She works with autistic children and their families…spends hours on the floor with brightly colored toys and objects, pushing, searching, compelling, and connecting with those little ones…gently pressing and urging them into opening their minds….

This past Saturday, I stopped-by my wife’s office to pick-up her laptop…and, since I had my camera with me…I took a few pictures of the toys that decorate her office, those “tools” that draw smiles and widened eyes on the faces of even the most reserved and stoic of fathers who accompany their little ones to their appointments, those tools that are often selected specifically for that particular little one to whom they would appeal.  I think it would be wonderful to visit such an exciting and even calming place if I was going there for help….and I can understand the little ones’ distress when their sessions are over and it’s time to leave such a fun place…a place where they think they’re just playing…but are actually building a relationship, learning the social rules of give and take, finding words they didn’t know they had, and allowing someone into their world, sometimes for the very first and significant time. 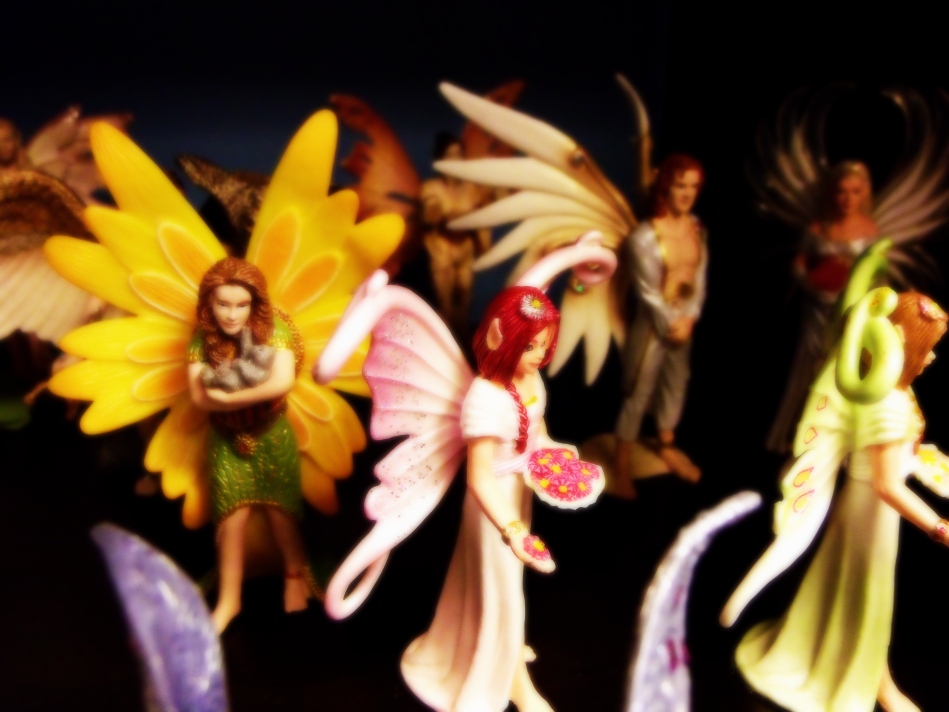 The children often take these figures and play-out little portions of their lives with the other settings in the office.  In addition to the doll house and fire/police station, my wife also has a sand-box and a little multi-leveled tree house that makes a great landscape for their adventures and re-enactments (the photos didn’t turn-out very well). 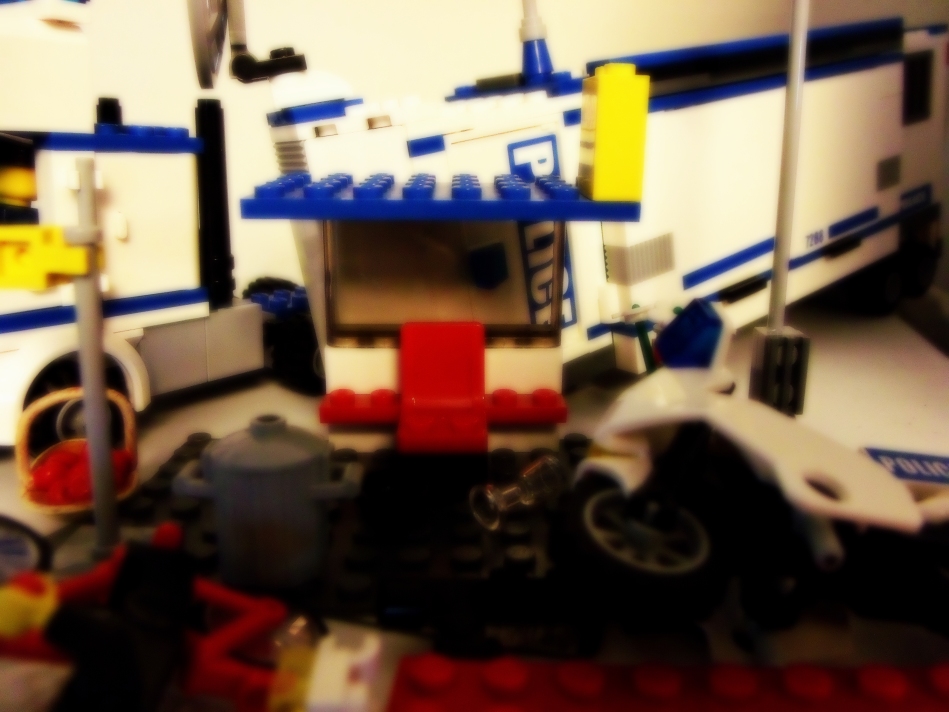 Don’t touch me, please, just leave me alone, and if you talk to me, just look across the room when you’re doing so, because I’ll be doing the same, I’ll be looking away, but listening, and listening still, I’ll see the words in their letters bound, with all the possible meanings that might be there, I’ll stop, I’ll halt, I’ll run along, I’ll interrupt, I’ll be not calm, my hands will wander, my fingers will pick and pry, I’ll look at you when you’re looking away, but I’ll be listening still and listening still.

When you walk away from our talk’s circuitous talk, I’ll wonder still at the words and then.  I’ll wonder for a while and decide, and then I’ll send them away, like you, in their categories, their phrases and their speaking and thoughts.  I understood it all, or most of it and then, sometimes I got some of it, but not all of it, and it registers in some forms, but not in others’ nuances.  It makes sense most times or sometimes, but not in other times, and you won’t know which it is, in these or those, not now nor then.

Sometimes your words scrape the insides of my ears before they reach my brain.  I hear their clicking and crunching ways and the wet spit that sticks to their sides, I notice when some letters are missing, like when your mouth gets lazy or you talk too fast, they catch in my ear canals when you say them wrongly, improperly, incorrectly, out of place, out of tune, out of context, in error, in mis-thought, whatever, when you emphasize the wrong syllable or say coush instead of couch.  The letters get jammed up in my ears sometimes so the other words can’t get through and then I hear your voice rise and rise and the letters get more jammed still, they run and run and crash into the sides of my insides, my ears and veins and arteries, too, they make my lungs pump harder and harder and faster still, the words are still clogged in their letters’ catching and the thoughts are gone and the letters become numbers and I hate numbers and they’re all a-squiggle and mean nothing as my heart is pounding in my head and my fingers pick their other fingers and everything gets fuzzy from the inside, hazy and undefined and I don’t know what you’re saying and thinking and your eyes are piercing when I glance at them for a micro-second from my turned head and I hear the spit in the corners of your mouth squish and squash as your mouth flaps and keeps throwing other words and letters into my ears and I wish you’d just shut-up and leave me alone and please don’t touch me, just go away, don’t step any closer or any closer, don’t talk any louder or any louder, just close your mouth and leave before I explode in your face with my eyes wide wide open and hands curled into fists and I’m staring straight ahead but looking for something to throw or hit and my hands crash into my head and I scream at you and pull my hair and scratch my face and I’m suddenly strong with a stupid strong and you can’t hold me, no, get away, leave me alone, stop talking, don’t touch me, the letters are all stuck and I hate you and I hate me and you get away from me and what do you want and what did I say and my cat died when I was four and you went on those stupid interviews and it snowed today and it rained today and where’s the goddamned sun today and it’s okay if you’re shy and I didn’t have a melt-down so that I wouldn’t have to finish my homework and I said it myself and the baby was crying and I just wanted to help and go away, just get away, and stop with the words, don’t touch me, put your eyes away…and hold me, crush me, just wrap me up, hum a deep hum deep into my core and the parts of my cells, just be a nothing with me for a minute more, until I don’t feel these things anymore, just for a minute more, long minutes more, until the letters get unstuck in my ears and I can hear what you’re saying again, just leave me alone, don’t touch me, please…but don’t let me go.