I had seen their sign on the way up the trail, huge hoof-prints, huge droppings, and bits of long, black, coarse hair…but not much else…no sounds, anyway.  It was hard to tell how old the marks and droppings were, but I kept looking to the sides of the trail for a bit…and then gradually didn’t think more about them.  I have seen their sign on other hikes and have only seen them once before…a solitary cow standing in the middle of the early morning trail….  On my return trip back down the trail, a couple of other hikers were stopped ahead of me, had their cameras out, and were pointing up the slope…all we could see was the female…laying there all large and sleepy in the woods.  I crept up the slope a couple of steps as the other hikers tucked their cameras away and started down the trail again.  As I kept zooming-in and taking increasingly closer shots, it seemed that I could see another ear flicker in the woods behind the cow.  The brush was too dense to see more than an outline of the other moose, so I tried to quietly head down the slope and over to the one side where I could see another access that might give me a better vantage point to see who else was back there.  Well…the couple of drops of Native American blood that I have remaining from my ancestors waaaay back did nothing to help me sneak-up on the creature that was hiding back there.  The bull moose heard me and slowly got up and started ambling through the brush, once or twice turning to look in my direction.  Again, the brush was thick and I only managed two non-blurry pictures that give a good indication as to what he looked like…with his antler buds starting to protrude from his forehead. 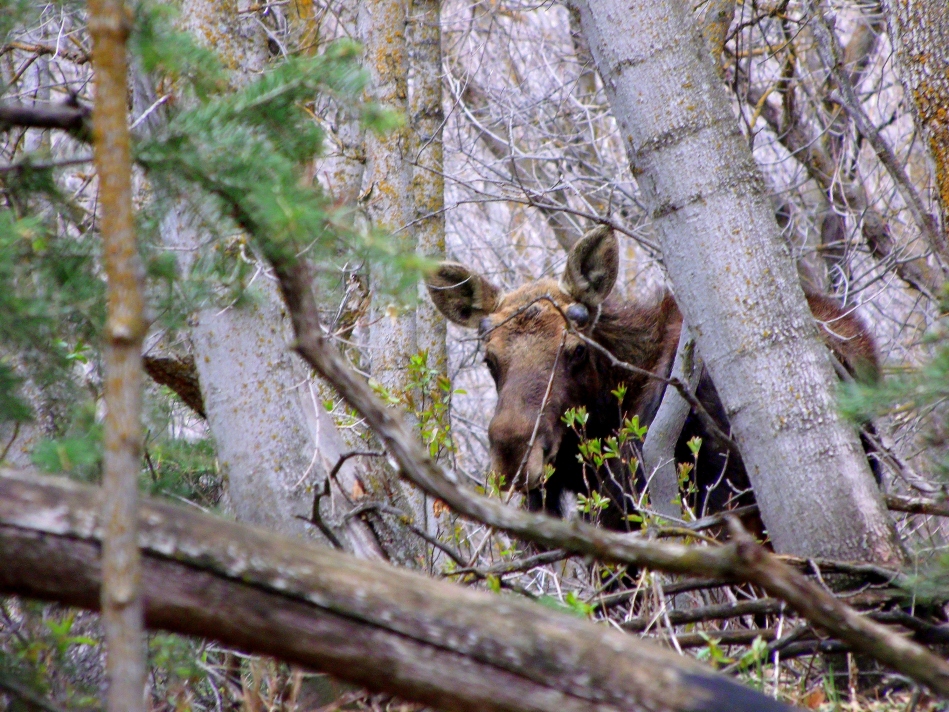