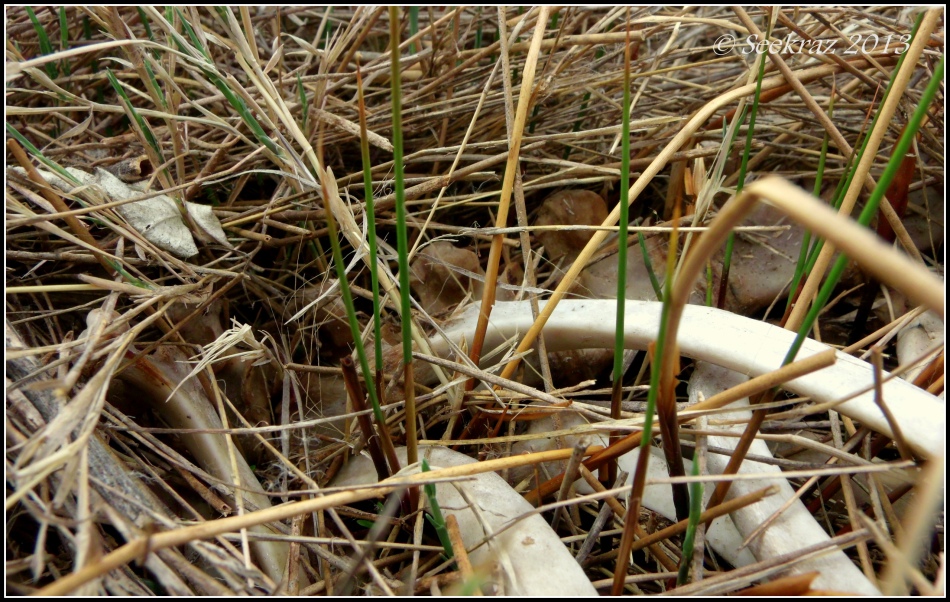 Farmland and mountains in Goshen, Utah

In this image from April, 2013, you can see the early spring greenery on the fields and hillsides, while there is still a fine covering of snow on the distant Wasatch Mountains.  Goshen is approximately 50 miles south of the Salt Lake Valley, in Utah County, and just a bit south of Utah Lake…the fresh-water lake that drains north via the Jordan River into The Great Salt Lake. 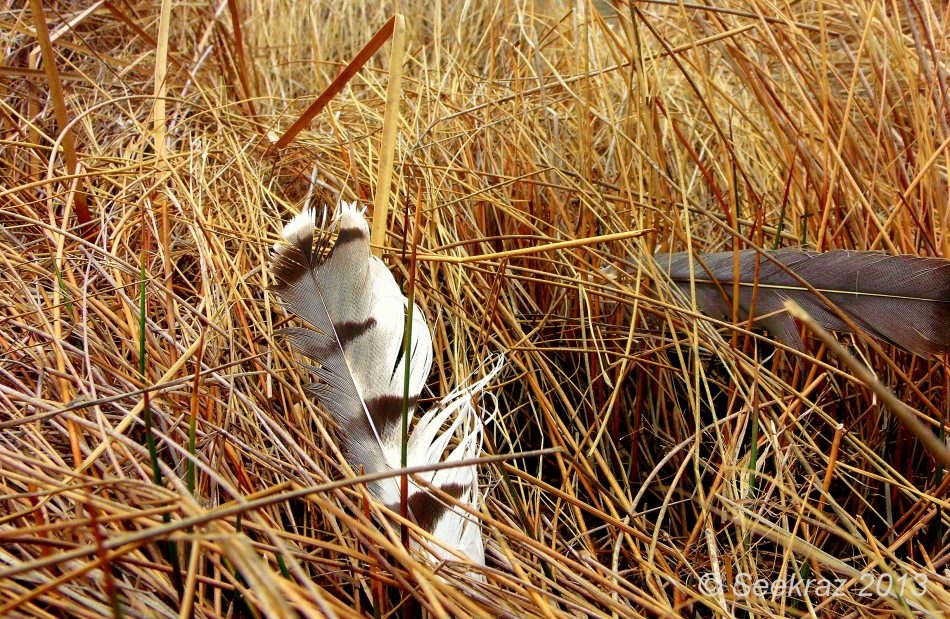 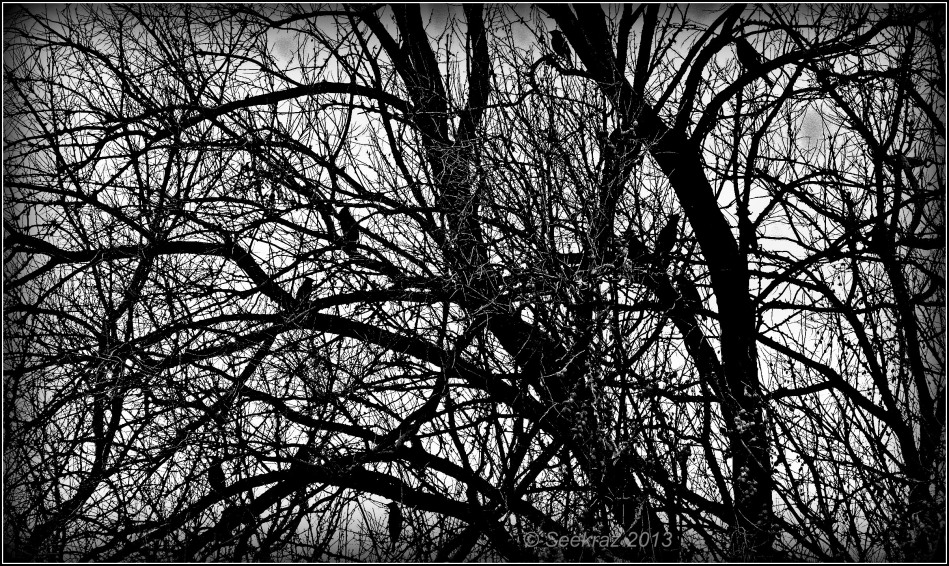 rails and reeds and mountains 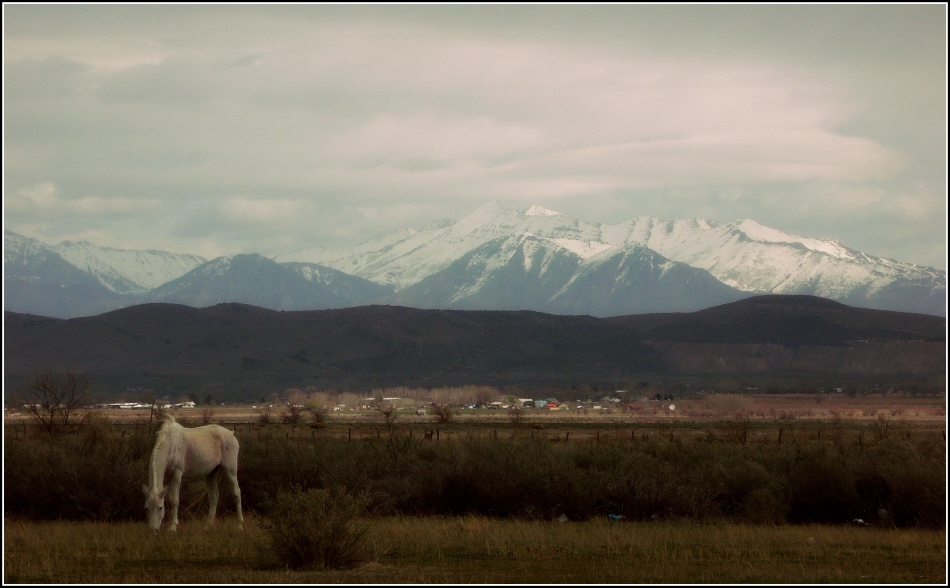 single rail to the past

it’s not what you look at…

A modern interpretation and expression of: “It’s not what you look at that matters, it’s what you see.” – Henry David Thoreau……found at the ruins of the Tintic Standard Reduction Mill just east of Goshen, Utah…. 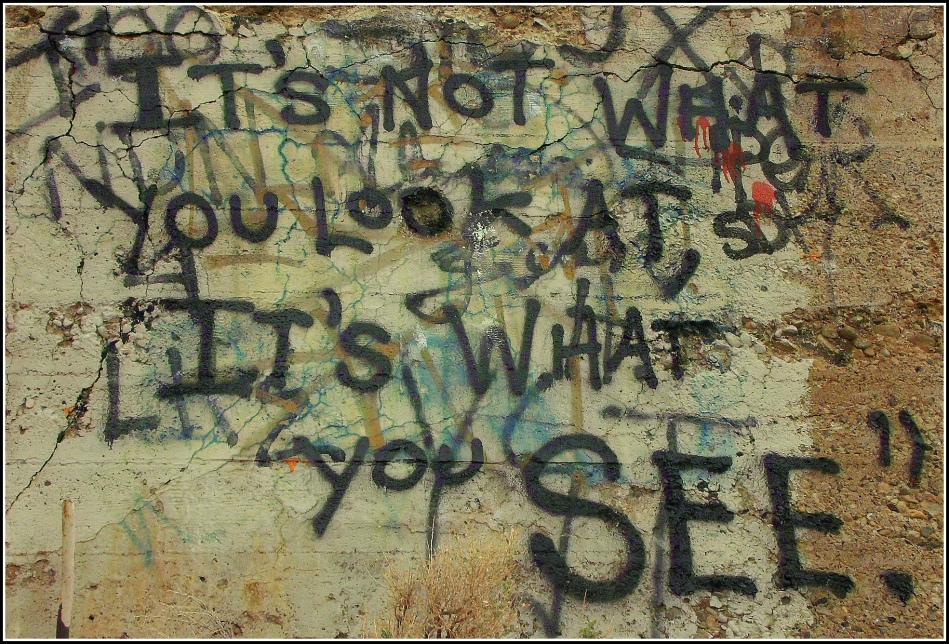 A week or so ago, my second son and I headed out into the beyond…took a tour around Utah Lake…essentially followed in the tire-tracks of  my third son who had made the trip on his bike last summer.  At the southern end of the lake, the road heads back east.  About two and a half miles past the town of Goshen, you can see what appears to be the remains of something on the side of a mountain. Even from a distance, you can also see that it has been frequented by taggers and graffiti artists.  My cycling son had mentioned the ruins after his ride and suggested that we needed to check it out sometime. 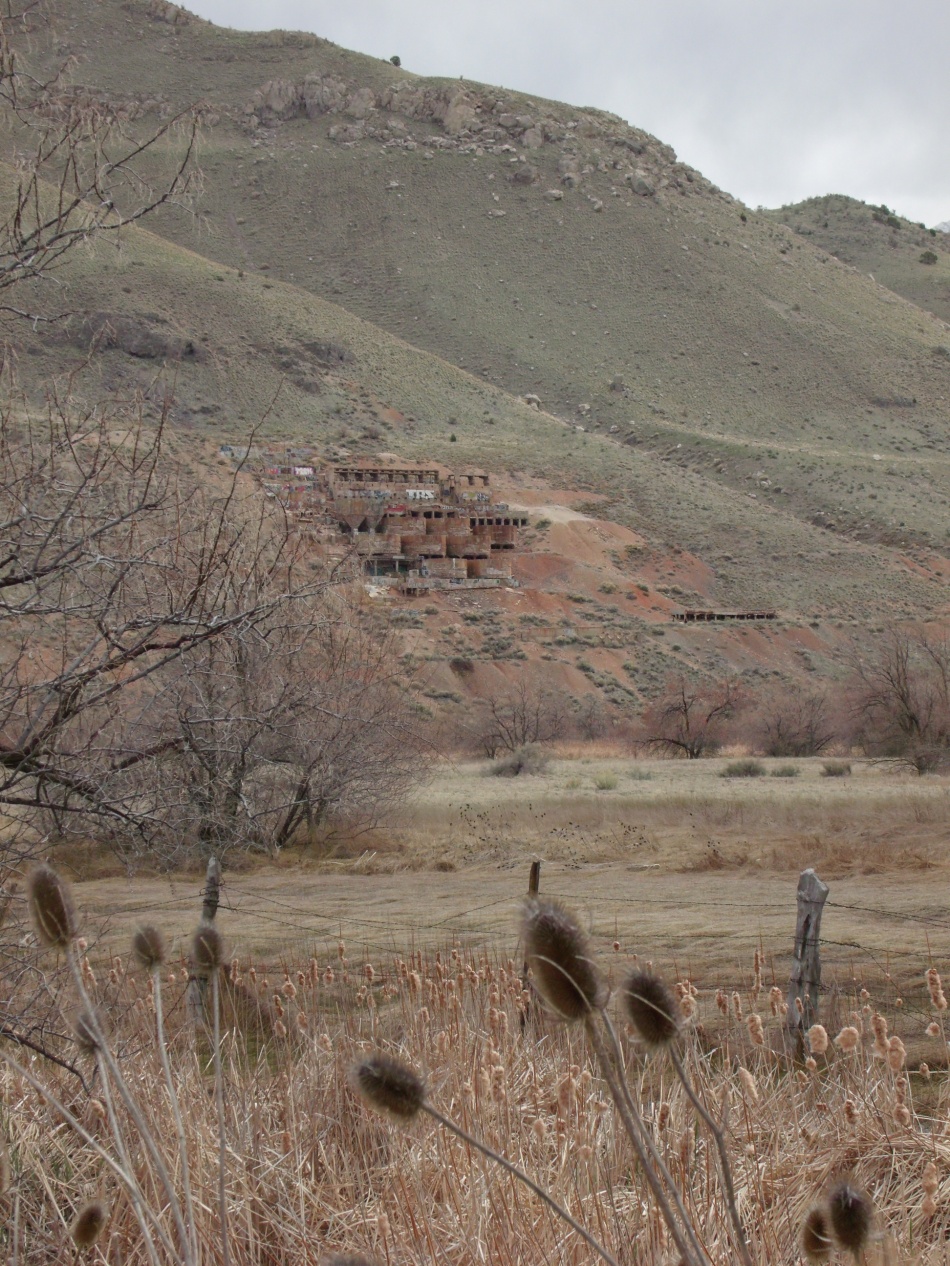 After leaving this site and finding a stronger signal for his phone, my second son determined that these were/are the ruins of the Tintic Standard Reduction Mill…an ore processing facility that was built between 1919-1921…and only used for four years…so it has been standing vacant and abandoned since 1925.  For a very brief history of the mill, you can click on the highlighted name to be taken to the Wiki article that provides a bit of information.

This link to the Historic American Engineering Record provides a more extensive history…and shows us what the ruins looked like back in 1971, after it had been abandoned for 46 years, and before a select demographic of our country decided that they needed to decorate the place with their spray-painted opinions and expressions of art.  The following images represent what the place looks like today…42 years after the essentially “clean” images from 1971…and 88 years after it was abandoned.

The entirety of the mill structure spans an elevation equivalent to eight stories of a building and is situated on the side of Warm Springs Mountain, 5,535 ft elev.

The circular structures are leaching vats where the crushed ore would be chemically processed to remove the silver, copper, lead, and gold.

Don’t know enough about it to even guess what the circular things below were/are….

The inside of a leaching vat…

These are the ore bins toward the right of the photo…above the leaching vats.

A view looking over the ore bins…with my son at the far end. 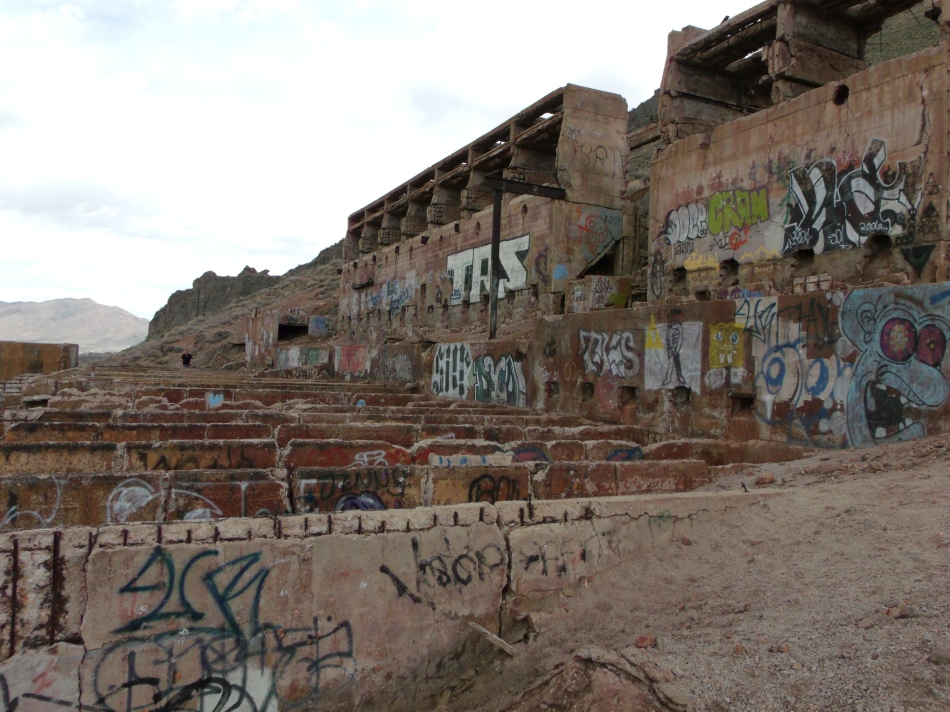 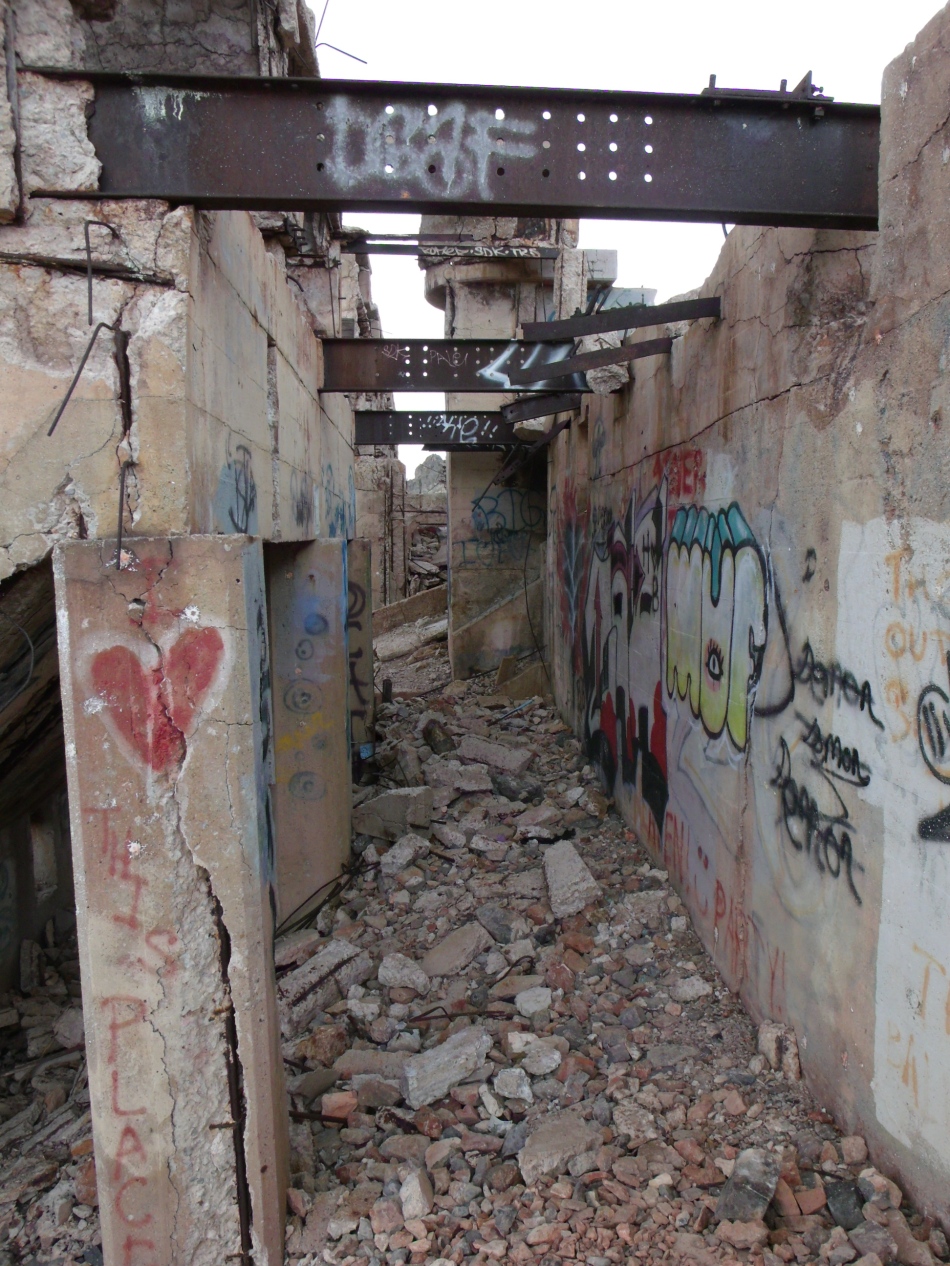 My son looking into the silver precipitator…the square-shaped structure with the conical (inverted pyramids) chute underneath…situated to the left of the leaching vats in the third photo above. 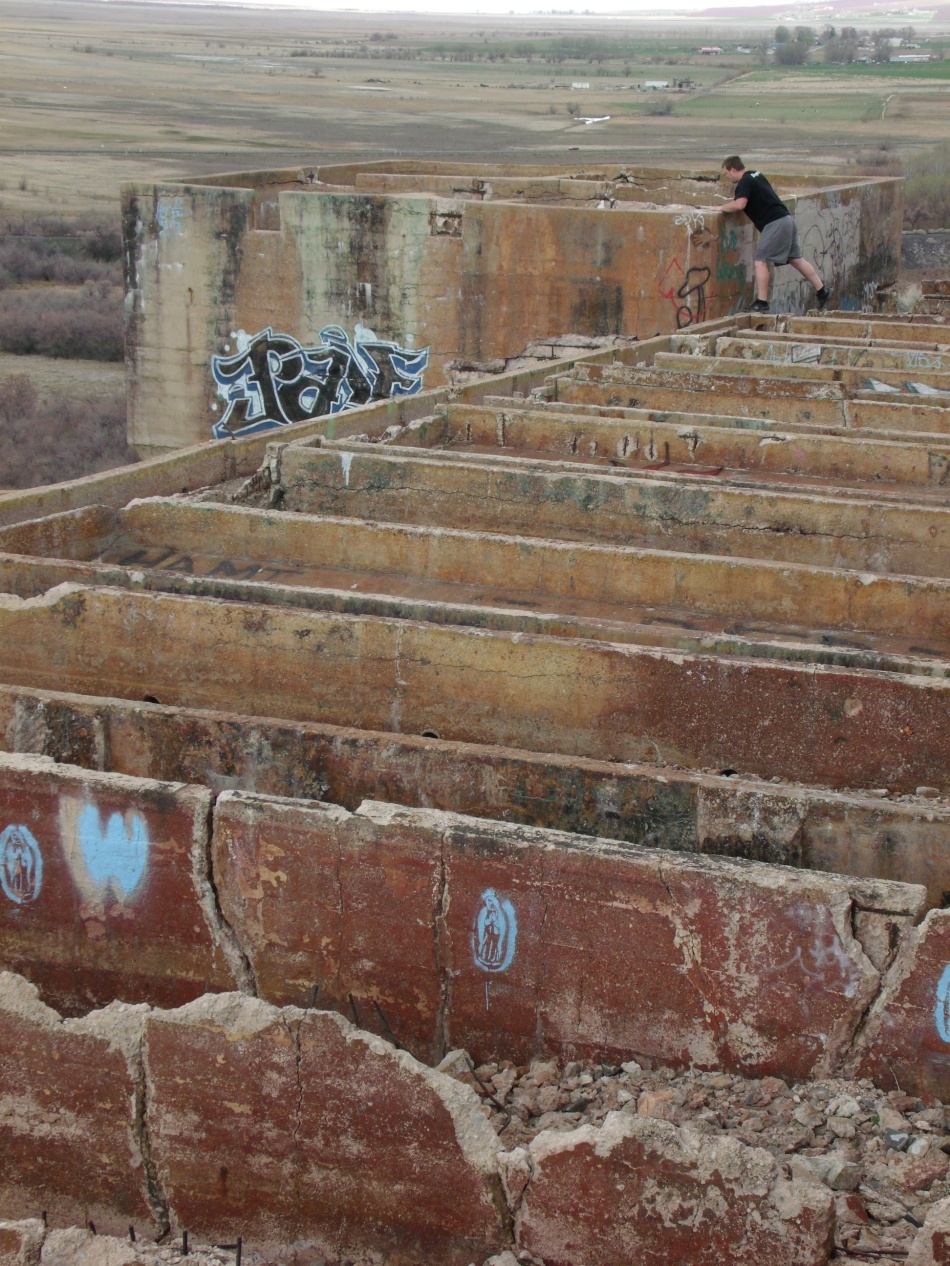 If you click on the link for the Historic American Engineering Record, you can see the diagrams that identify the various parts of the mill that I have named in the post…the leaching vats, silver precipitator, ore bins, roaster, etc….

I believe that’s the water tank in the photo below…with Savannah and Shilo painted on it…….and if you look in the very first photo above…and notice the somewhat removed, shadowy structure to the very bottom right, those are the lead precipitate bins…..

Looking over the ore bins…in the opposite direction.

The front of the roaster section….

Warm Springs pond/lake below the mill…. 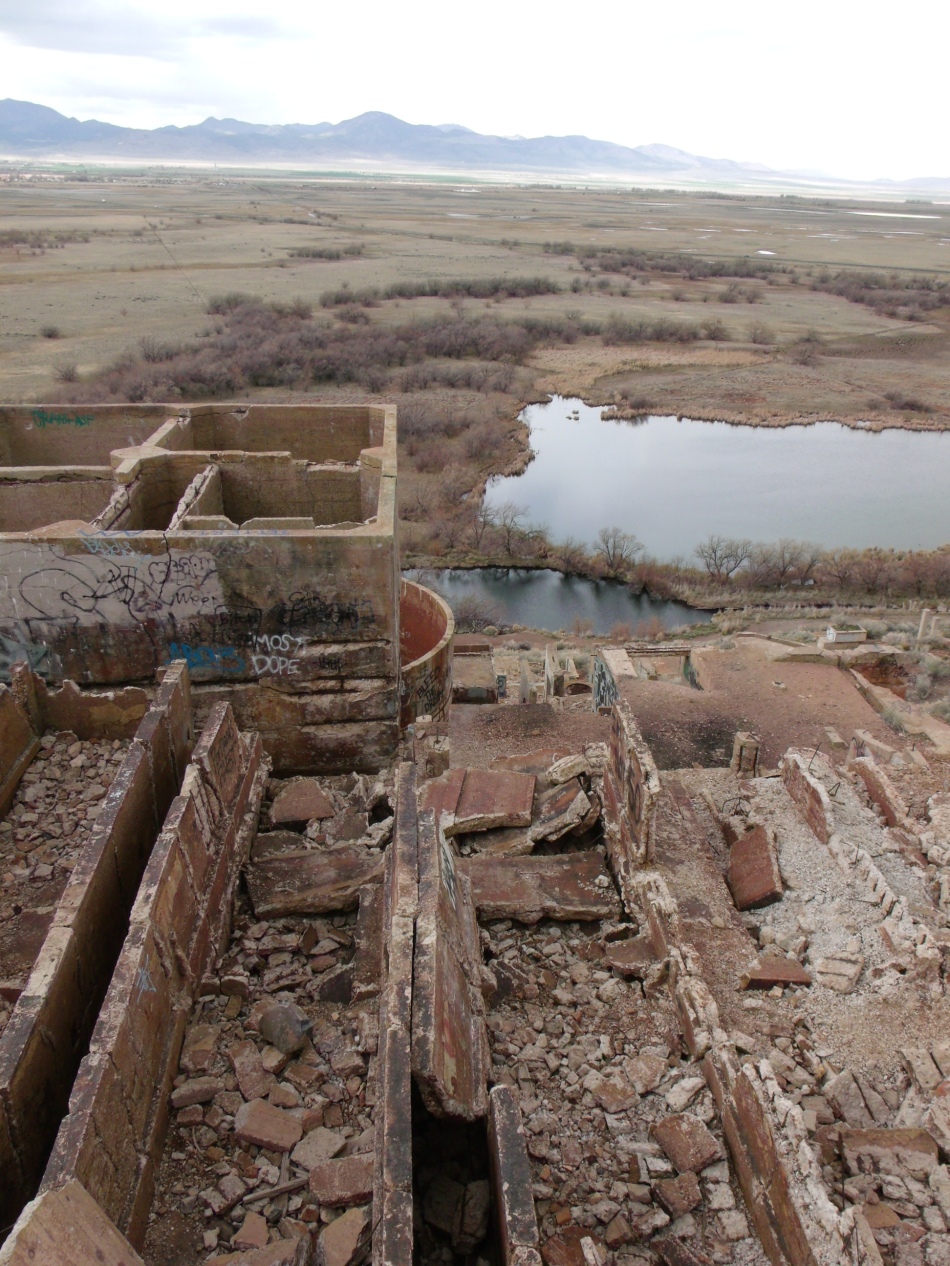 The below image is from the highest, developed area of the mill…where I was standing on the remaining foundation of what I believe you can see in the very top left corner of the last image of the post.

The Tintic Standard Reduction Mill before its decline….

Hmm…so this post was quite a bit longer than my normal fare…but I hope you enjoyed it anyway…..

As always, thank you for being here.

the past and passing