Watson Lake is situated in an area known as the Granite Dells…weather-worn remnants from another geologic era.  There is another lake a bit to the north and west named Willow Creek Reservoir.  I haven’t been there yet, so that’s another Prescott adventure for the future.

The brochure for Watson Lake states that it is four miles northeast from downtown Prescott, Arizona…it is also 98 miles from my driveway in the far northwest valley of metropolitan Phoenix, more precisely, it’s that far to the parking lot for the Peavine Trail…a former rail-bed turned hiking trail that runs along the southern edge of the lake and beyond.

I follow an Arizona hiking page on another social media site and have seen numerous photos or posts about the lake and its very immediate environment.  I have not, however, seen any images from the trails that circle the lake, nothing from the greater setting in the Granite Dells…and, actually, nothing beyond intimate photos of water reflected boulders and beautiful sunsets.

The above image is the only one that made it into black and white.  The location was in the shadows of the cottonwood and other trees in the southeast corner of the lake, and while it provided great access for longer views while approaching the lake, it was difficult to capture significant color in the immediate area.

My original plan was to hike the majority, if not all, of the Peavine Trail.  I understood that it was somewhere between 11 and 12 miles in length, and that was what I wanted…a nice long hike…situated near the lake…close enough to it that I could make some images of my own.

Shortly after passing the above location, I ventured off down one of the shore trails and wandered around looking for photo worthy settings that weren’t too effected by the morning’s sun and shadows.  I didn’t have much luck….

So it was back on the Peavine Trail heading northeast again, parallel to the lake…and going away from it.

The lake and surrounding property now belongs to the City of Prescott…literature claims they took possession of it in 1997 in order to protect it and to use it for recreational purposes, etc.  In their efforts to make it more user-friendly, they placed weather-protected maps on sign posts along the way informing the hikers where they were in relation to the lake, which trails they could take, distances covered, etc.

When I noticed that I was going to be heading too far away from the lake on one of the trail-side maps, I decided to take the “Over the Hill Trail” back to the greater network of the “loop” trail that essentially circled the lake.  Given that much of the trail was over exposed rock and was not discernible as an actual trail, the Parks Department painted white dots on the granite to mark the way.  You can see one of the dots to the right and down from the tree in the center of the above image.

The “Over the Hill” trail led down to Granite Creek, which we can see in the lush green toward the bottom of the rocks….

When the Over the Hill trail intersected with the Granite Creek trail, it was initially unclear which way to go…right or left.  Heading toward the right led to waist-high grasses and very soggy walking, as the trail through that tall grass was actually under water.

Turning back to the left brings us back to a clear trail, still through tall grass, but alongside the creek, and then (not marked), heading over the metal walking bridge that you can see directly above the tree that is in and over the water.

Another thing that the juncture of the two trails mentioned above brought to me, was the sound of a waterfall…that very particular crashing and rushing of water kind of sound that means water is flowing hard and fast somewhere nearby.  As you can see above, it wasn’t exactly a “waterfall,” but is was definitely falling water…hard and fast and loud in the half-circle of the concrete and canyon walls. 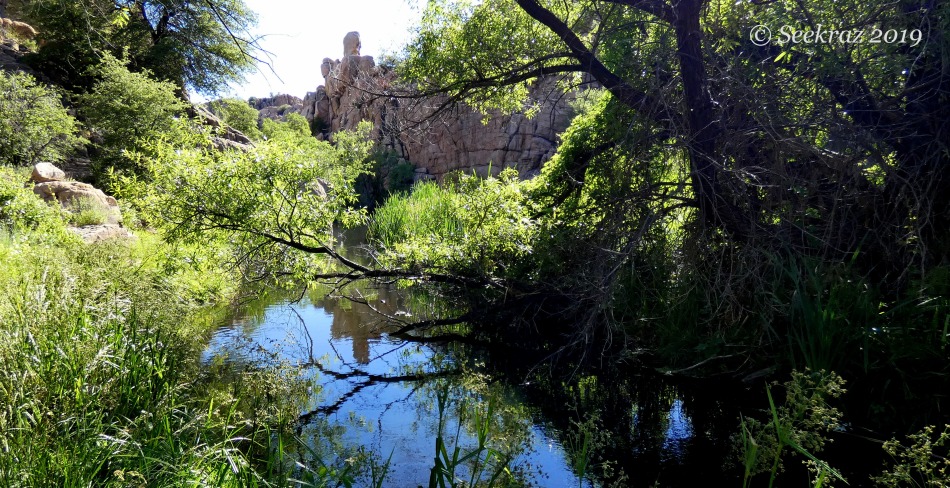 This is still a desert, supposedly…high desert…5,000 plus feet in elevation…stream-side…marvelous…wonderful…green….

Exposed granite slabs, rolls, pressings…and I imagine it would be hotter than the blazes with reflected heat on a true mid-summer day…

The first glimpse of the lake after rounding the granite hills…now perched on what is the northwest corner/curve of the reservoir….

The front side of the dam, above….

Heading back down south and west….

A cormorant congress above….

Looking back north and east…. 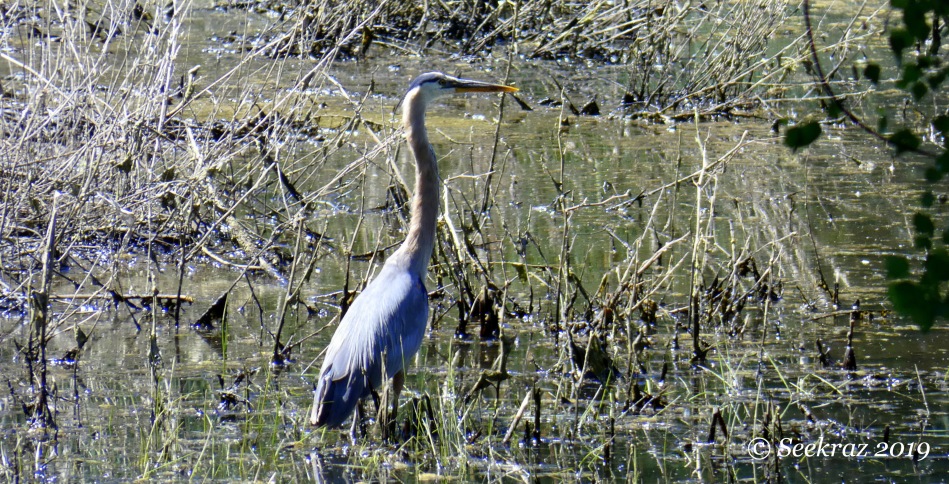 A closer look at the heron in the backwater toward the far south and west…nearing the Discovery Trail….

…and now into the deep cottonwood shadows that we skirted at the beginning of the hike…beautiful shade and cool breezes.

Watson Lake, Prescott – a study of textures and lines

I woke at 4:00 am, drove for two hours, and still arrived an hour or so after sunrise…considered doing the entire shoot in black and white…settled for color, though, as I could change the treatment later…changed the frame to more of a wide angle, similar to that of a large-screened television in format…found that I was disturbed by the breadth and mass of the sky in the viewfinder, actually felt off kilter, but I knew the setting would help for the more panoramic shots that would come later and didn’t want to keep fiddling with the camera…so I changed my point of view and came home with this….