The first day of Winter 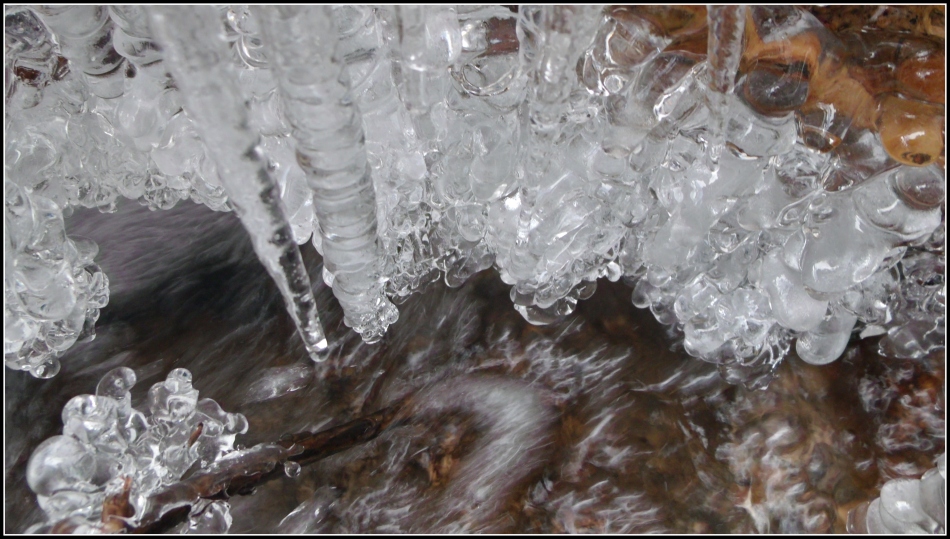 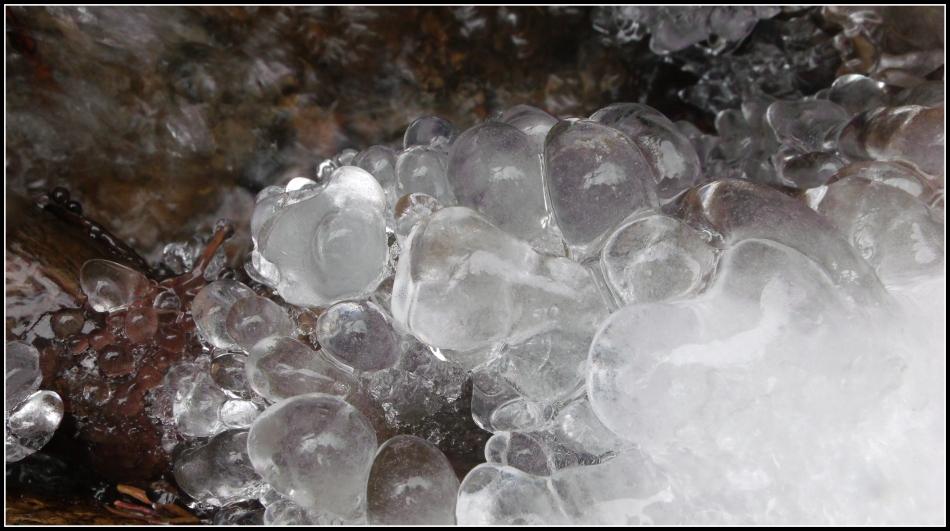 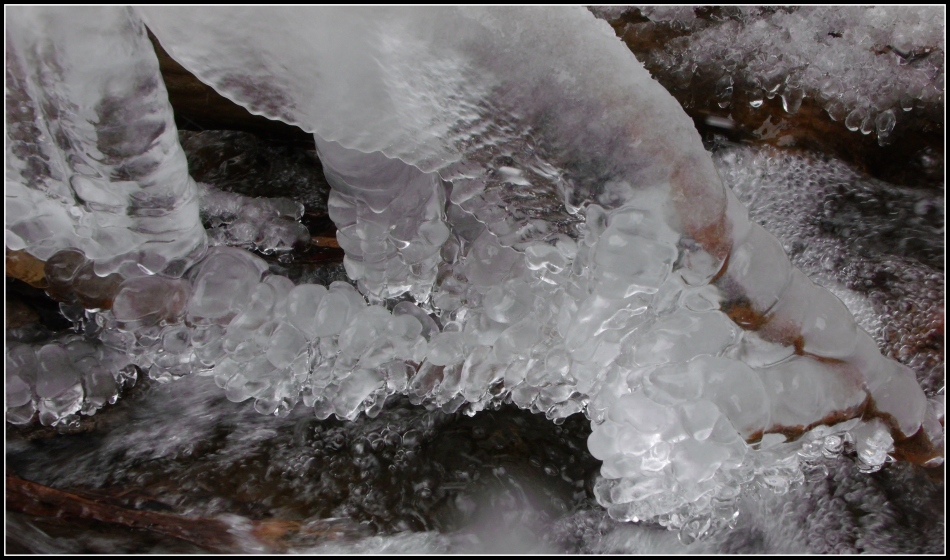 What are the ruins in Little Cottonwood Canyon, Utah?

Those were the words that I typed into Google when I returned from my first hike to this end of the Little Cottonwood Canyon trail and found these ruins.  The below photo is from that first hike and sighting of the ruins…taken in November, 2010 (take note the arch over the window-frame on the far left end of the building).  I found an “ok” article on Wikipedia that talked about skiing in the canyon…and some other generic information, but nothing that addressed the ruins specifically.  I then went to “images” on Google and did find some images, similar to these, but nothing that provided links to historical information…only suggestions that it was a church, evidently thought to be one because of the nice arches above the tall window frames.  I think I must have found a couple/few mentions of the building being a church in some Flickr albums….  I later wrote a little story about it having been one…which you can read by clicking on this highlighted name – Ruins. 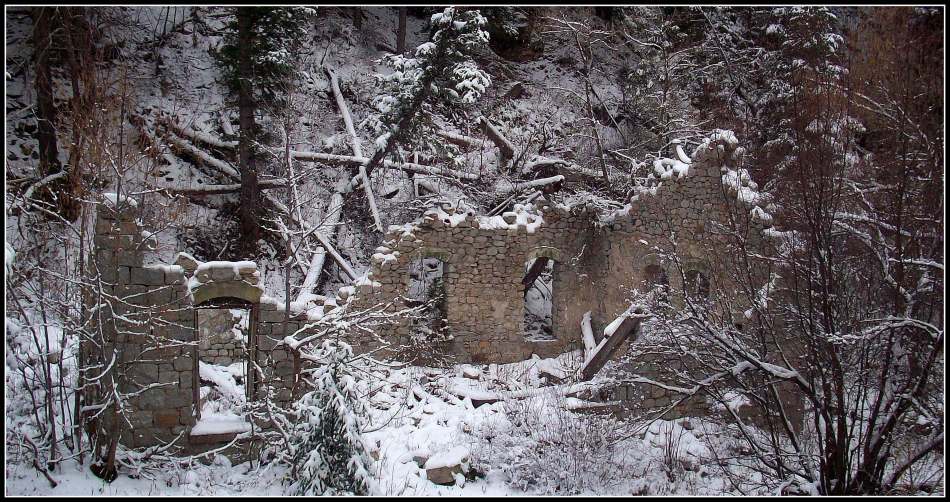 But it wasn’t a church…a beautiful building at one time, maybe/yes, full of mystery (explainable), and even charged with electricity (literally), but there wasn’t an altar or communion table, no preacher, priest, or prophet directing the administration of an almighty…the building was an electricity generating station…a power-plant made of white granite blocks that appear to have been hand-carved from boulders that had tumbled from the mountains above it…. 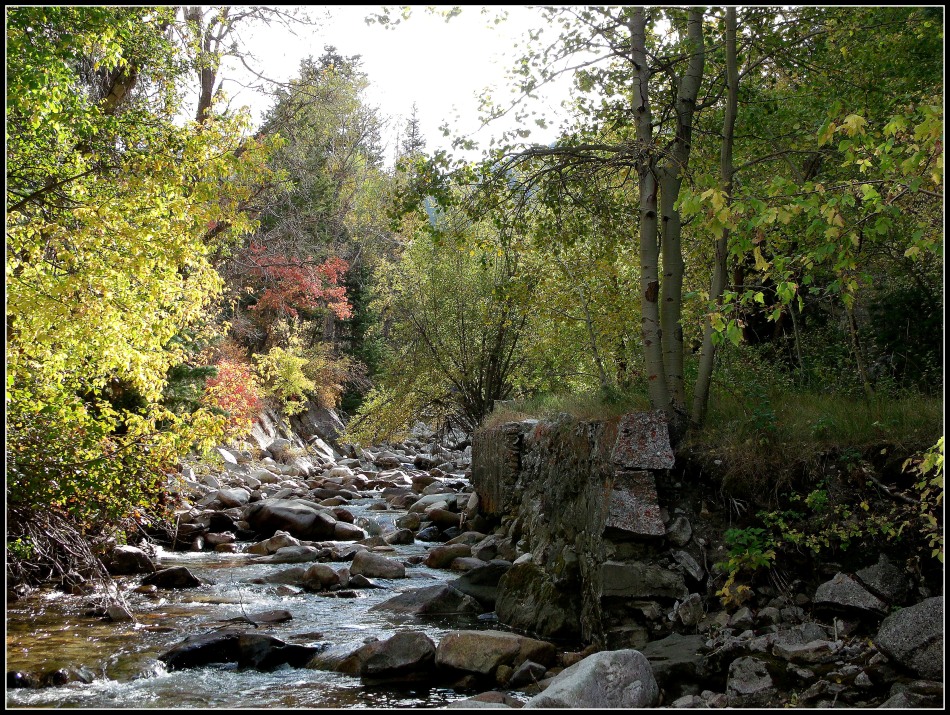 The Columbus Consolidated Mining Company started building the generating station in October of 1903 to power the mining operations at Alta, about four to five miles upstream near the end of the canyon.  The availability of electric power would allow the company to use compressed-air drilling machines, motor-driven concentrating/smelting machines, and turbine pumps to remove the ever-seeping water from workers’ tunnels so that the mining operations could continue.

Immediately to the left and out of the frame of the above photo, there used to be a bridge that crossed from the other side of the stream to the power station.  The bridge was removed at some point, and until recently, hikers/adventurers could only cross the stream when the water level was sufficiently low enough to allow for rock-jumping…or wading.  I say “recently” because someone has very recently installed a nice 2×6 single-board “bridge” with a miniature zip-line overhead to allow for careful crossing over one of the narrower parts of the stream.

One of my sons and I managed to cross the stream this past April (see the last two photos) when the stream was very low before the snow-melt began.  The inside of the ruin was still covered in deep snow and it was difficult to discern what it might have actually been…even though we had more than a little bit of confidence that it wasn’t a church because of the power poles and  apparent water pipe/chute that we could see through the broken floor.

The water pipe/chute that I mentioned above is actually located just out of frame and to the right in the above photo…it didn’t make a very interesting photo…so it’s still in its folder on my computer and not appearing here…maybe that’s a shortcoming of mine as its photographer…but it simply didn’t look very compelling…anyway….  During my explorations, I also found another three places where the underground pipe had been exposed, one on each far end of the building property, and the third on the opposite side and downstream from the ruin.

These autumn-toned images are from my first, non-snow-covered visit into the power station ruins.  I had been on the trail earlier in the year and had looked into it from afar, waiting for the water level of the stream to go down again…yearning to sit there for a while so I could process what I had learned of the place and match it to what I could see in front of me…and to listen for echoes of distant voices, the quiet rushing of water beneath my feet…and the fleeting sounds of whirring motors.

About a mile upstream from the ruins, there is currently a camping area that has the name of “Tanners Flat.”  This was once a staging/holding area for ore that had been brought down from the various mines that were higher in the canyon.  Over the years, there were also lumber mills, hotels, a smelter operation, an aerial tramway station, telegraph station, and even homes built in the area…all gone now, of course.  The name of the present-day campground is all that is left of the location that was once known as “Tannersville.” 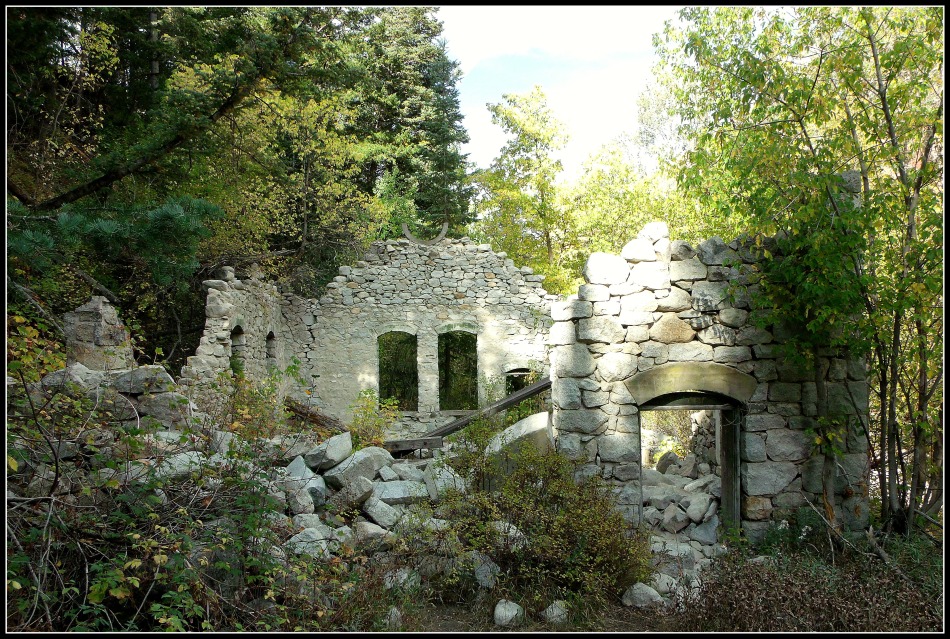 I provided all of that info above to simply say that there was a dam built on the stream at Tanners Flat.   The water was diverted into 22-inch pipes that traveled about 4,500 feet downstream and was shot into the power station to turn the waterwheels, which, in turn, powered the generators that sent their electricity back upstream to the mines, boarding-houses, businesses, residences, etc., in the Alta area.  I haven’t seen it yet, but I understand that there are also remains of the retaining wall of the breached dam…somewhere along the southwest corner of the campground…which probably won’t be too difficult to locate. 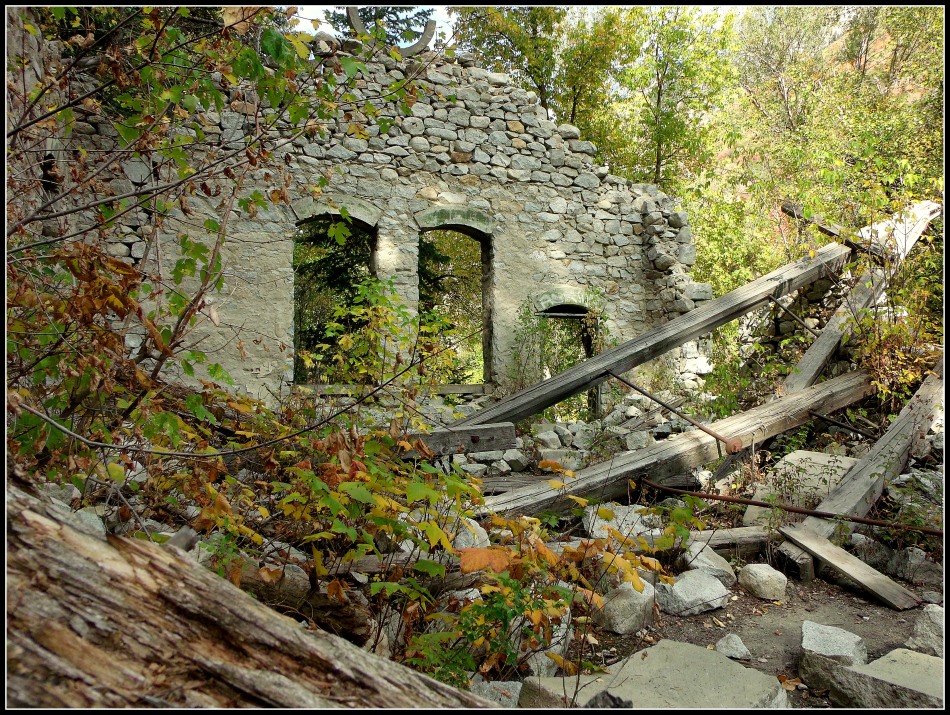 I don’t know that I’ve mentioned it elsewhere, but if you’re able to access a map that shows details of Little Cottonwood Canyon, the power station is located approximately halfway between Hogum Fork and Maybird Gulch…on the south side of the stream.

If you ever come across a copy of Charles L. Keller’s book, The Lady in the Ore Bucket, first printed in 2001, you can see the author’s photograph of the ruins (Figure 35) in which this wall, that is now missing its window arch, is largely intact from one end of the building to the other, from the ground to over the tops of the windows…and the east end of the building, which is the far right end in the above photo, is nearly as complete as the front wall is on the other end of the building.  For clarification/orientation, the largest intact portion of the structure is the west end (the “front” with the complete doorway and two complete window frames).  The building is essentially parallel to the stream, which runs from east to west, and lies on the southern side of the stream. 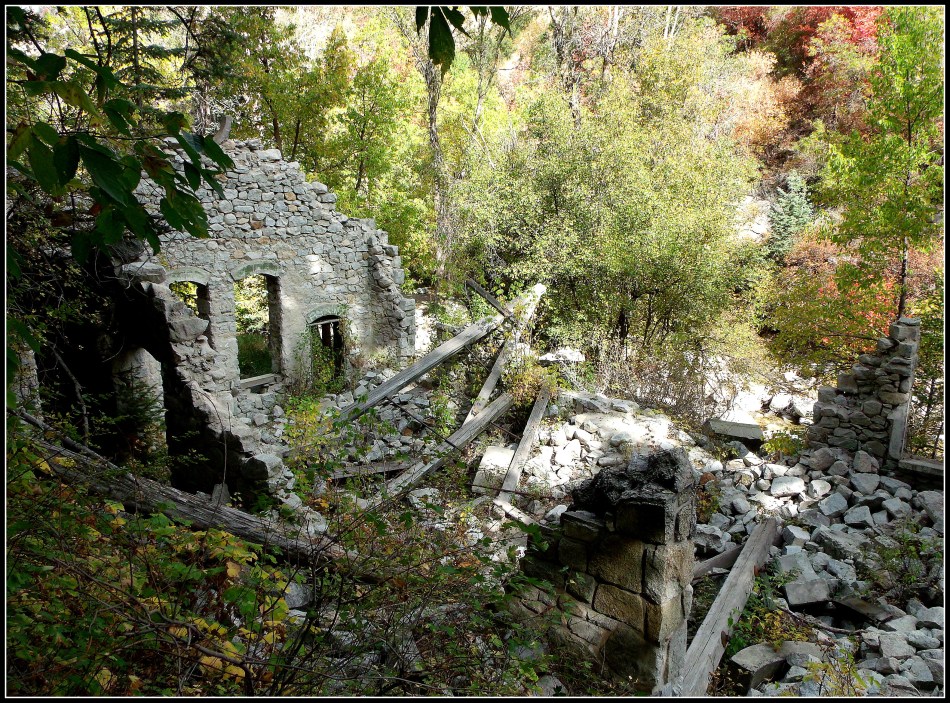 I mentioned above that construction of the power station began in October, 1903.  As with many other pursuits in life, there were delays in the completion of the project, but it was finally finished, and electricity was finally produced and sent up to Alta on the evening of July 4, 1904.  Because of an increasing demand for power up in the mining district, a second generator was installed in late 1905.  In 1913, the Columbus Consolidated power station was made a subsidiary of the Wasatch Power Company, which was then merged into the Utah Power and Light Company sometime in 1929.

As the mining endeavors became less fruitful in the Alta area, and as electricity-producing technology advanced, there became less of a need for the plant here in Little Cottonwood Canyon.  The precise date that the switch was turned off on the Columbus Consolidated power station has been lost to the passing of time, but it is believed to have occurred sometime in the early 1940s. 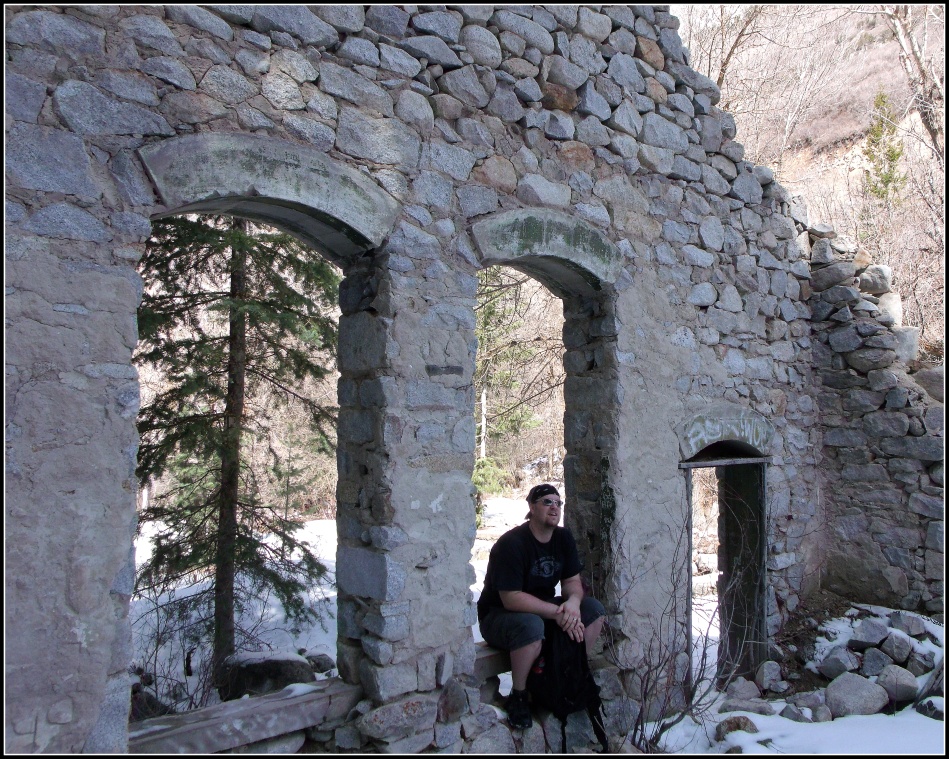 Yes, that is a look of wonder on my son’s face in the above photo…can’t help but smile out there….

***Please note that all of the historical information provided above was obtained from Charles L. Keller’s book, The Lady in the Ore Bucket.  I was introduced to the book by Knick Knickerbocker of the Wasatch Mountain Club.   He shared the information about the book during a conversation that we had on a rainy Sunday afternoon while hiking down the Days Fork trail in Big Cottonwood Canyon.

These photographs were taken somewhere between one and two miles up into Little Cottonwood Canyon along the shore of its very own stream or creek.  The running body of water actually begins about nine miles east of where these pictures were made…up into the canyon, just past the ski town of Alta, at a small-ish alpine lake called Cecret Lake…with that spelling.  The lake is situated at about 11,500 feet in elevation…and eleven miles down from there, at around 4,500 feet, the stream enters the Salt Lake City metropolitan area….  So, these pieces of wood may have traveled all of those miles or only some of them…and maybe came from around 7,000 feet higher than where I found them…at any rate, I think they’re rather pretty…rich in color the way the earth is…from whence they came…and where they shall return in their elemental forms…. 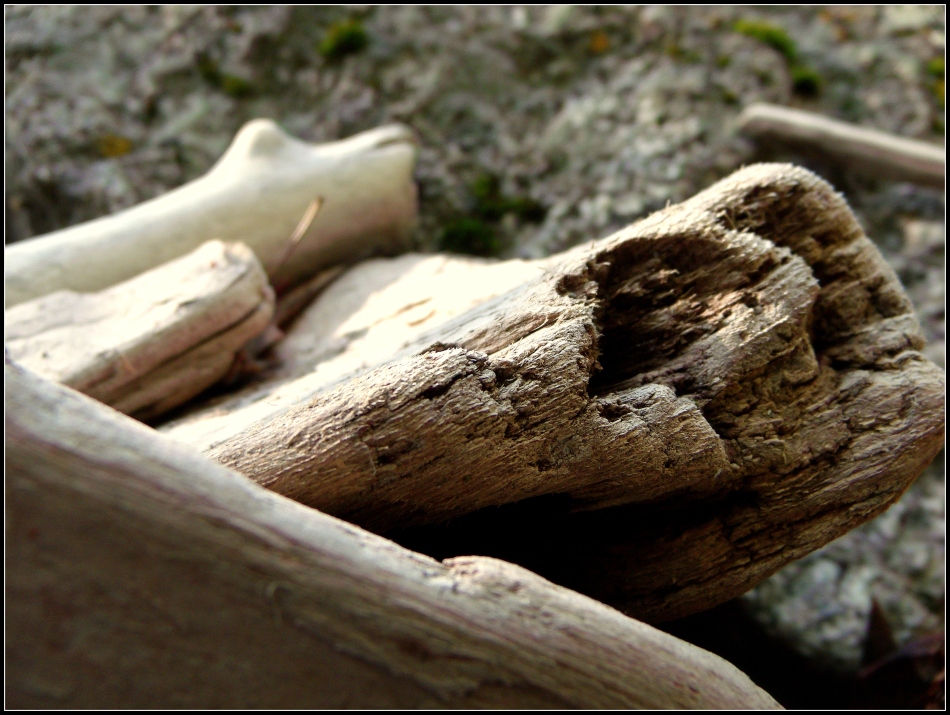 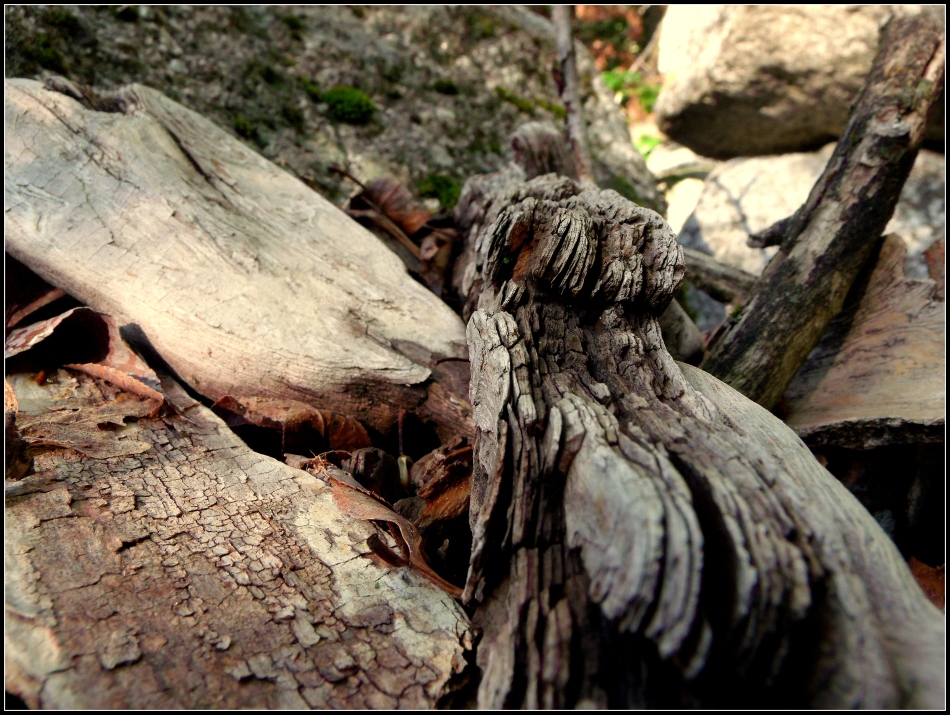 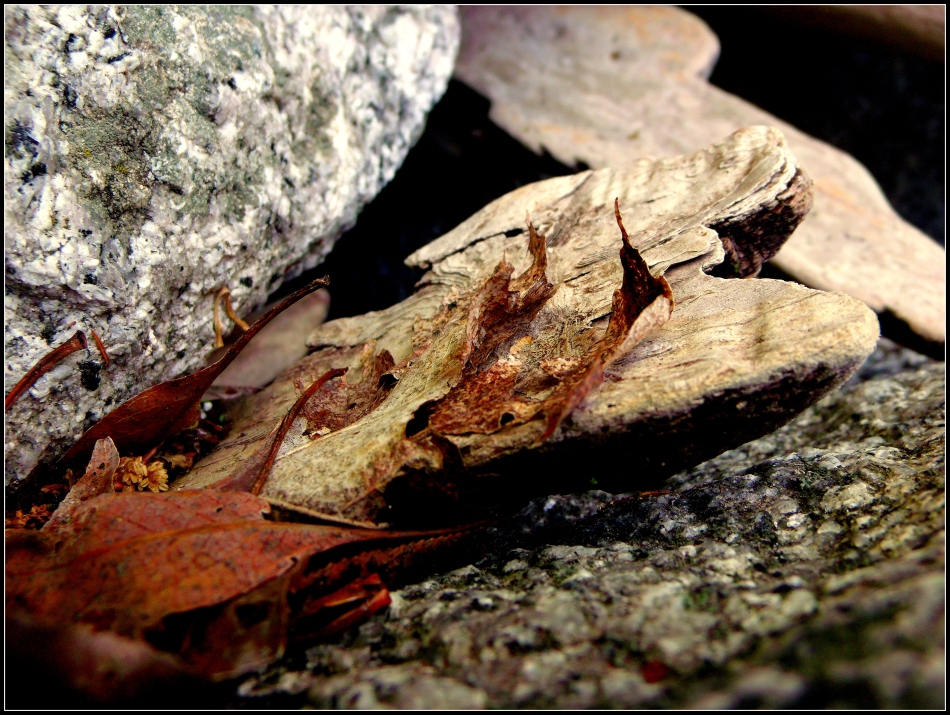 I’ve mentioned before that the Little Cottonwood Canyon stream is empty for part of the year, as the water is diverted into collection points, sent to treatment facilities, and then included in the municipal water supplies for the greater Salt Lake City metropolitan area.  There is a time of the year, however, when the stream is allowed to run, as it contains too much water from the snow-melt to be collected in its entirety.  I rather enjoy the stark contrast in the images of the empty stream-bed and the full and rushing stream.

This photo was taken in April, 2012 before the season’s snow-melt…

And this photo was taken at the same location in July, 2011 during the height of the season’s snow-melt…