For the past several years, I have used the website “Weather Underground” to follow the temperatures and weather patterns in the places I have lived…and to even look back nostalgically at places where I used to live to see how things are going there, as well.  Two weeks ago I was watching the temps for Black Canyon City and hoping the high temperatures for the coming weekend would be lower than they were a couple of weeks earlier when I was out in the murderous heat and so desperately needed a Coke after my hike.  I was in luck…the high for this past Sunday was supposed to be under 100 degrees, which meant that I could get out on the trail around 6:00 or 6:30 in the morning, have a nice long hike, and still make it back to the truck before the heat became too ugly.

This first image is of the Bradshaw Mountains, looking northwest at 6:25 am.  The larger trees in the foreground are a variety of Palo Verde.  During drought conditions, the trees lose their leaves and are still able to perform photosynthesis through the chlorophyll in the “bark” or exterior covering of all of the branches and trunk….  You can also see several Saguaro cacti in the background….

Most of my hiking in recent months has been along the Black Canyon Trail.  I’ve been out six times and have covered nearly half of the 78 mile long trail.  If you care to look at a map, find Interstate 17 (I-17) going north from the Carefree Highway at the extreme north end of Phoenix, and imagine a trail running in the desert just west of the interstate and east of the mountains further west…and follow that space northward for about 80 winding and curving miles up toward the Prescott National Forest.  The portion of trail featured in this post is what can be found heading north from Bumble Bee Road, about 25 miles north of Phoenix.

This second image is primarily of the “Pancake Prickly Pear” cacti and the dried wild grasses common to this area.

If you’ve ever driven that same interstate north from Phoenix and remember seeing a rest-stop sign for “Sunset Point,” and you stopped to look west at the huge, folding and flowing mountains, this hike took place on the stretch of trail just west from that Point.  The first part of the hike was mainly in the shade, as the trail followed the contours of the west facing side of the hills and was situated far enough below the ridge-line that I was out of the sun for quite a while.

It’s been a while since I shared multiple photos as single images, instead of presenting them in the “gallery” form, but I thought the photographs from this hike would be easier to appreciate in this larger form…so here they are, placed in chronological order and covering the first two and a half hours of the hike.  There will be a couple of other posts in which I share groups of photos from particular stopping-places along the trail. 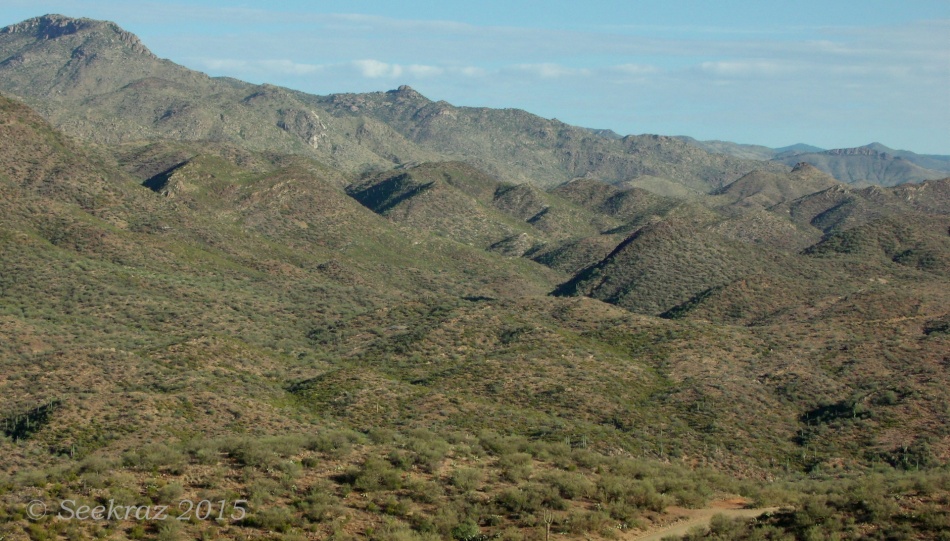 These “desert hills” and mountains are quite different than the ones I hiked for the last few years, but they are still inviting…and tempting me to go off-trail to explore the draws and ridges that we can see off in the distance.  I won’t likely do that until the temperatures are much lower, however, just in case some “unplanned” event occurs and I’m out there for longer than I had planned to be. 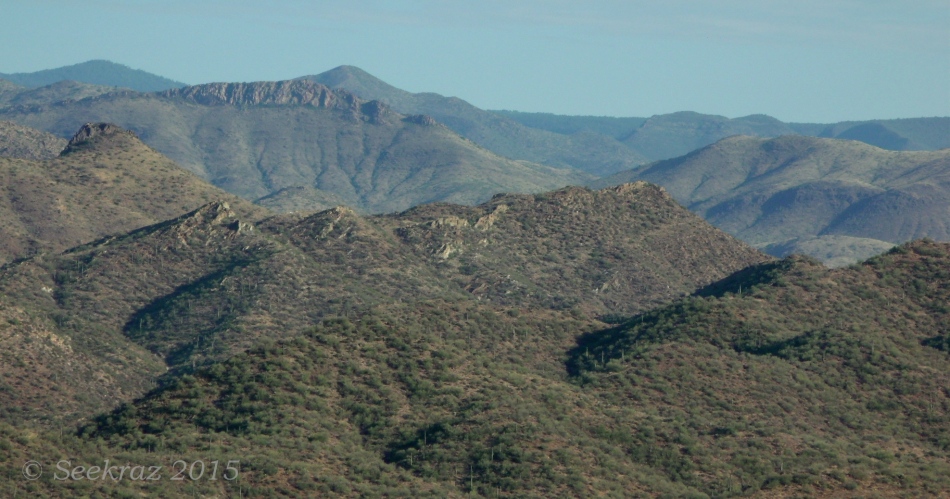 In the below photo, you can see an unpaved portion of Bumble Bee Road in the lower right corner, a couple of hiking trails further in the distance, and then a section of what might be the Agua Fria River bed in the area just left of center.

I had knelt to take some closer shots of Prickly Pear cactus fruit and saw this single piece of bone lying nearby.  A quick search of the area failed to reveal any other bones, so this one must have been carried away and left here when the predator or scavenger was finished with it.

At just past 7:30 am, the sun was sufficiently over the ridge to highlight the shrubs and grasses along the trail in the next photo.  This one, right here, is where peace comes out on the desert’s trail, to me anyway…I love this image, this piece and the broader whole that it represents…the light, the smell, the quiet whisper of the morning breeze among the branches and grass, the un-nameable feeling that comes with being right here…is wonderful, and compelling, and alluring, and causes me to go out into the unpleasant heat that I know is quickly approaching, so that I can be here on a trail like this one.

I would prefer temperatures in the 60s or 70s, but it was far from ugly-hot when I stopped to make this next photo.  At only 7:45 am, it was still rather nice for desert hiking. 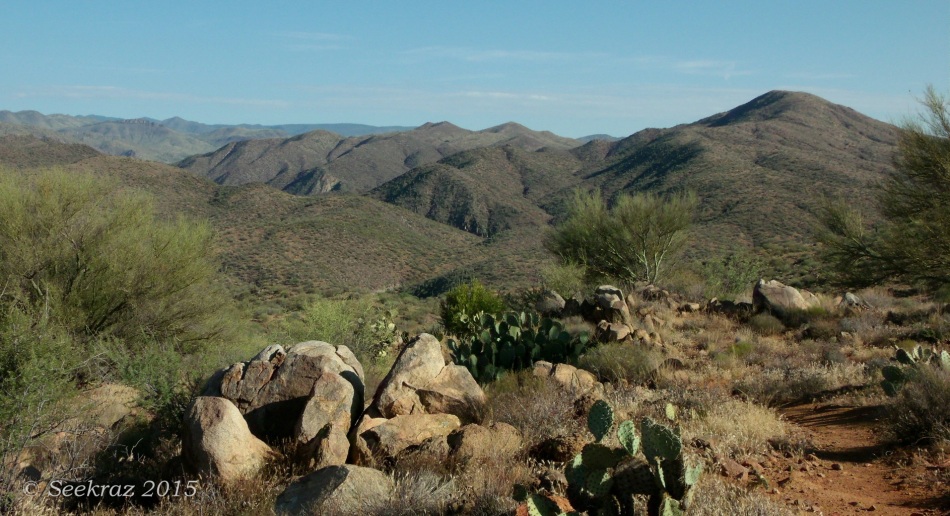 My only companions for the day were two mountain-bike riders who passed me on their way out and back in again…and the occasional cow, a couple of dozen lizards, multitudes of desert birds, and a single rabbit… 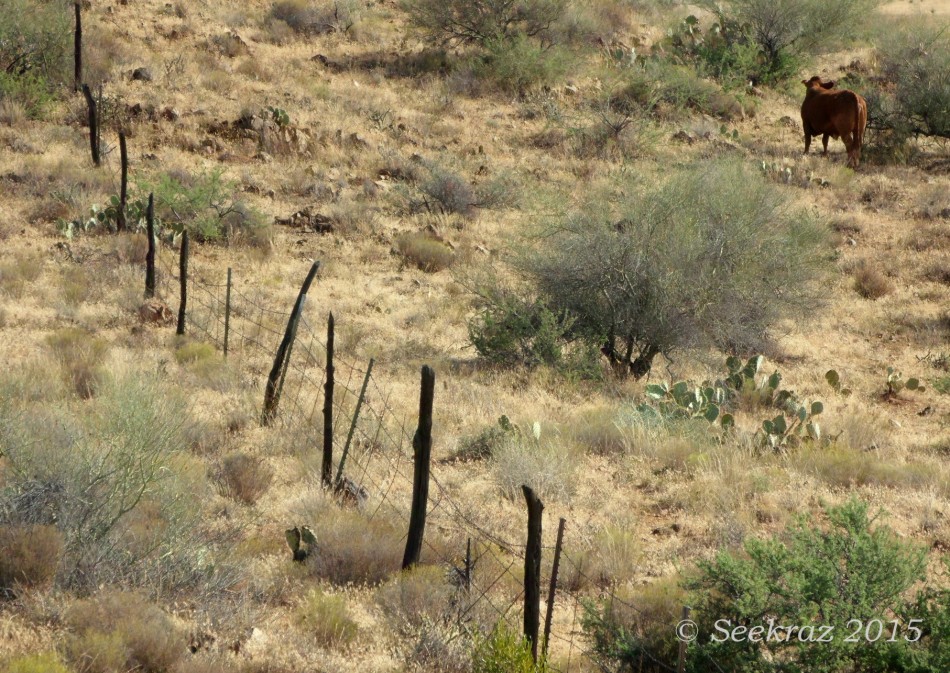 Lines of demarcation, thine and mine, in the images above and below, but I was and am thankful that there was a gate or opening that allowed passage…so many places we’d like to go, it seems, have fences around them….  At 8:10 in the morning, I wondered how many mornings and afternoons these fence and gate posts have seen….their colors and textures speak of years…decades, even. 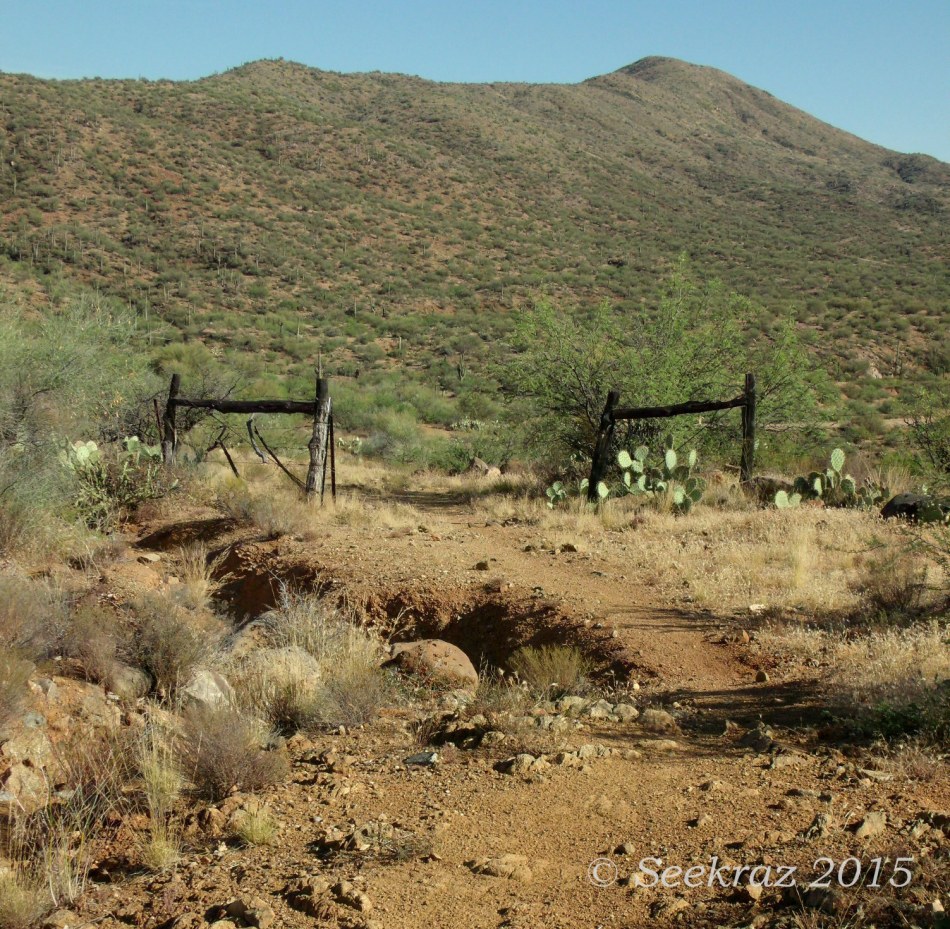 The photograph below shows another view of an image that you have likely already seen…but I wanted to share it again within the context of the hike, moving from place to place, with the morning green of the desert hills and mountains, and the richer green, like a ribbon of life that thrives along a desert waterway, a sometimey waterway that likely runs below ground for most of the year, but rises again with the various seasons’ rains and floods.

I usually become aware of the Gambel’s Quail when they burst from the underbrush as I pass too close to their hiding place, but I happened to spot this silent sentry as she sat alone in the tree some 20 or 30 yards off-trail.  Even at this distance you can tell that this one is a female, as her head is missing the distinct color pattern that is common to the male.

And lastly, several blooms on a Graham’s Pincushion cactus.  I found several of these along the trail and, upon first seeing them, thought they were headbands that some hiker had lost along the way…they were so very bright, so vibrant in the middle of all the earth-tone, desert colors that surrounded me, they just seemed so unnatural and out of place.  And if you’re interested, the flat, paddle-like leaves around this cactus belong to the Jojoba plant…. 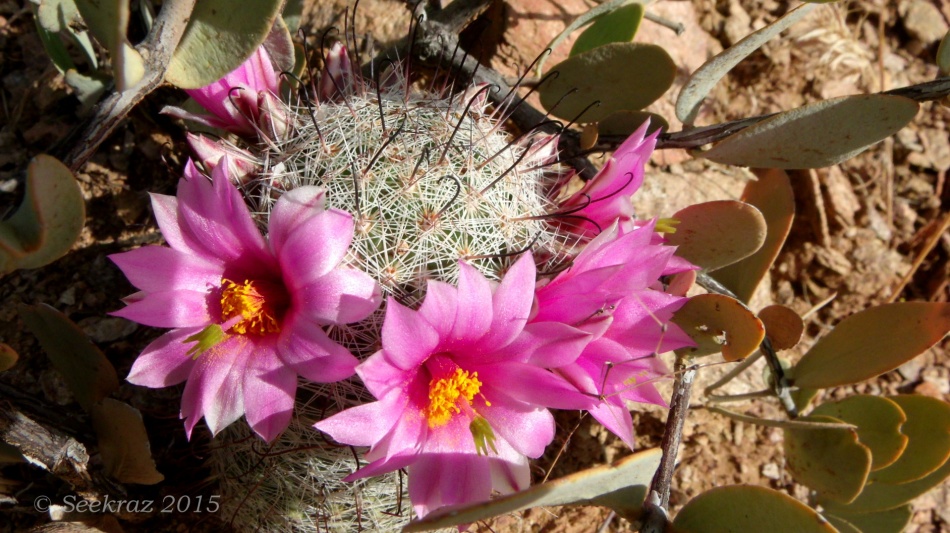 So…that was most of the hike, on the way out, anyway…and minus a couple of detours that I will share later.  Thank you for visiting…and I hope you have a nice week.