In my most recent post on this western mural, City Paint 6.4 – “Becoming” almost finished…, I mentioned that I had spoken with the artist and that we were going to meet the following weekend.  Well…because of life and parades and being called-in to work, that meeting finally took place three weekends later. 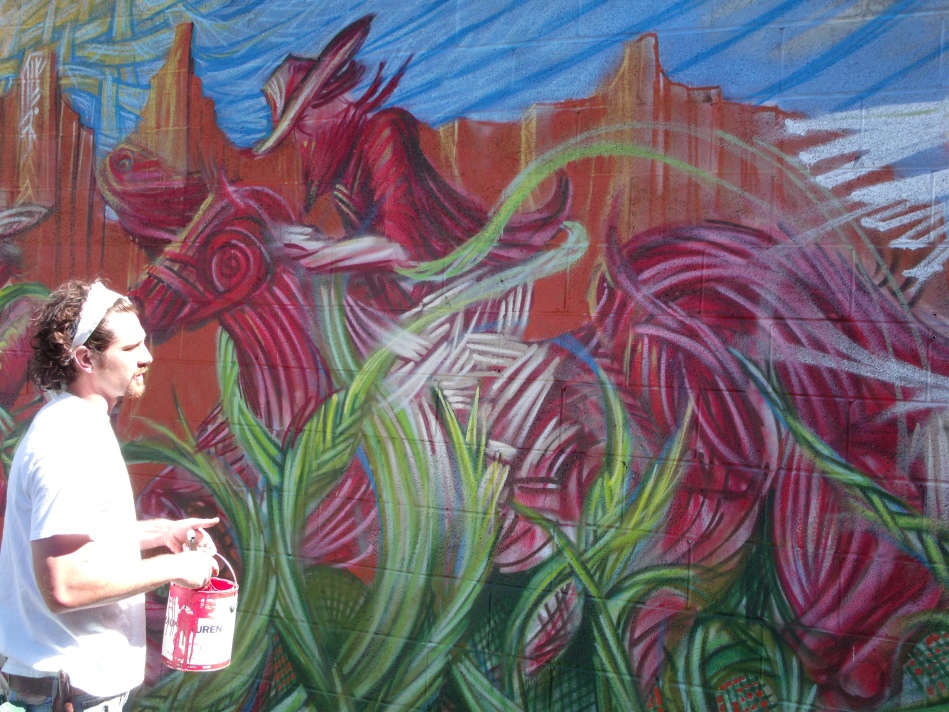 Aside from talking about life and relationships with girlfriends and wives, his siblings, my children, living in military families, maturing on our paths in life, sports, mixed-martial-arts, college, art, blogging, sports-talk-radio, trust, forgiveness, graffiti, street code, bastards who tag over other artists’ work, guns, bartering, Utah history, and religion…we also talked about his mural…. 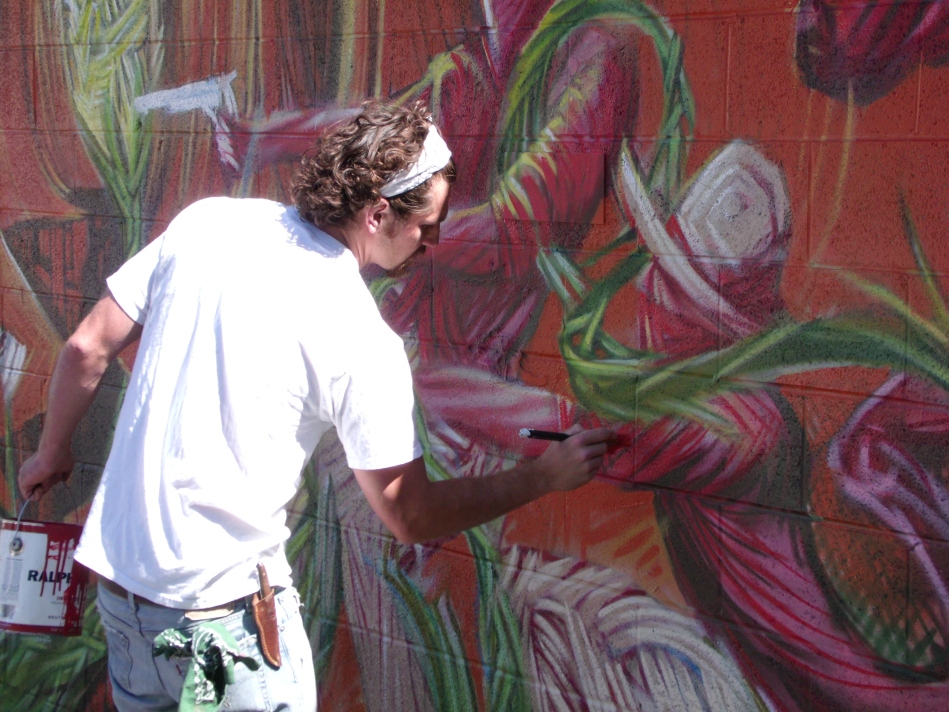 The artist, Gerry (pronounced “Gary”) Swanson (at www.silentswanart.com), has named the mural “Five on Five,” a sports reference to a battle being waged between a group of Native Americans and a group of western cowboys. 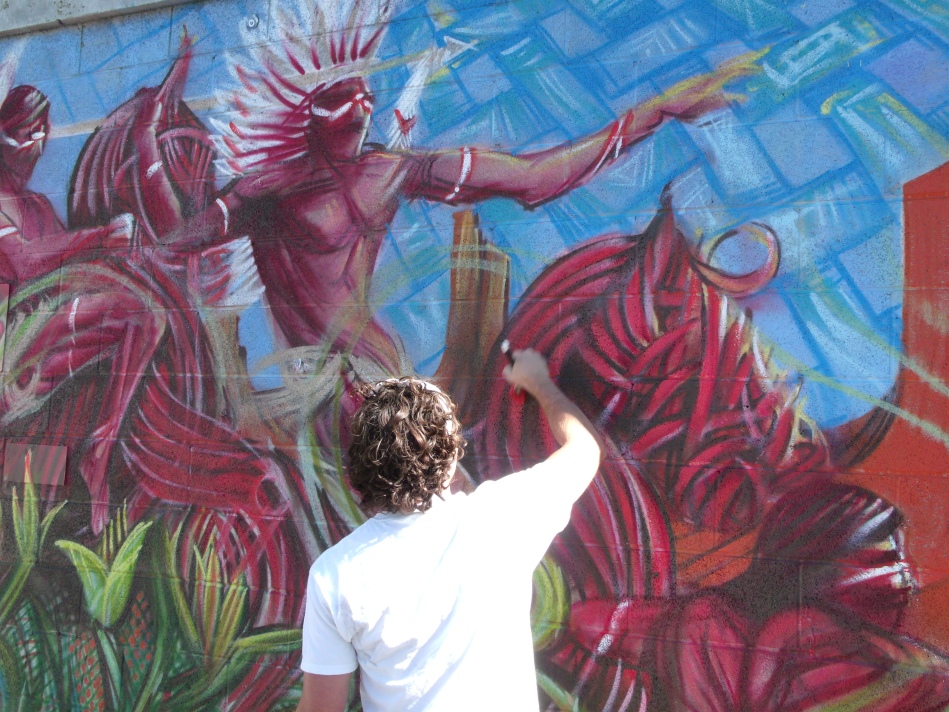 He was not formally commissioned to paint the mural, but he has done work for Gallenson’s Gun Shop in the past, so the store owner trusted that he would create something appropriate without having any guidelines or requirements.  Gerry said he wanted the mural to showcase an event from the history of the Mountain West…which included guns. 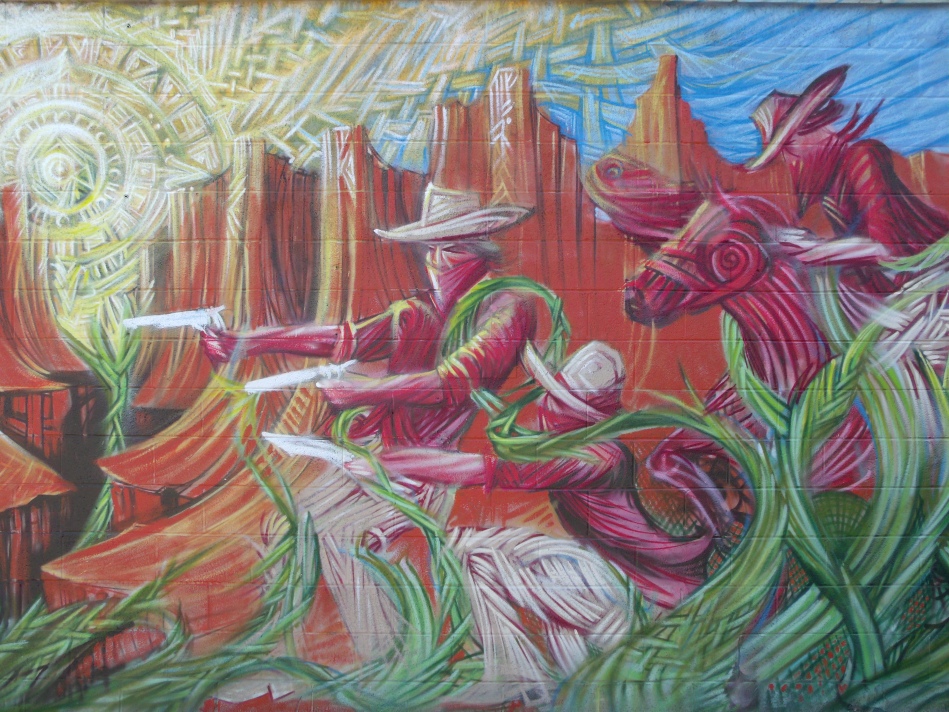 He said that the canyon provides a literal and metaphorical boundary or divide between the opposing sides, such geographical features are common to the Mountain West area, so it seemed fitting that it would be the line of demarkation between the participants. 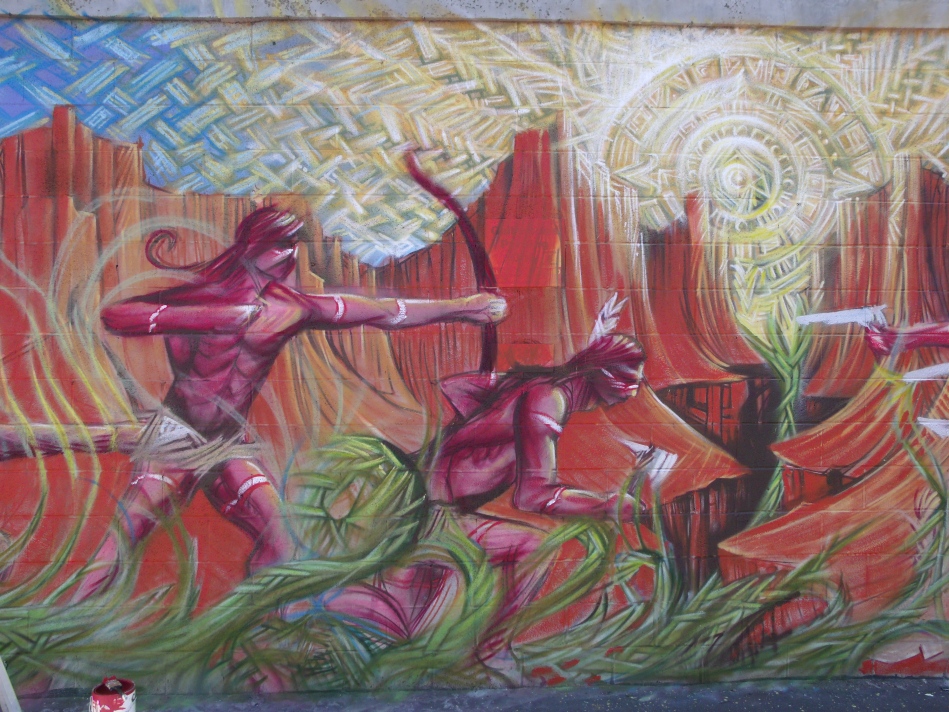 When I asked him if this was a fair fight, guns vs bows and arrows, he said that the cowboys might have had a technological advantage, but the braves were stronger physically and had time and nature on their side.  The sun was painted as it was to represent the familiar image of the Maya calendar, easily applied to these native people, as they are of the same indigenous stock as the Maya.  The natives were aware of time, but it was simply part of life, the cowboys were caught-up in time and attemtpted to control it, marking their actions and lives by its rules.  The vegetation was supporting the braves, pushing them into the battle, while it was wrapping around the cowboys and hindering their efforts. 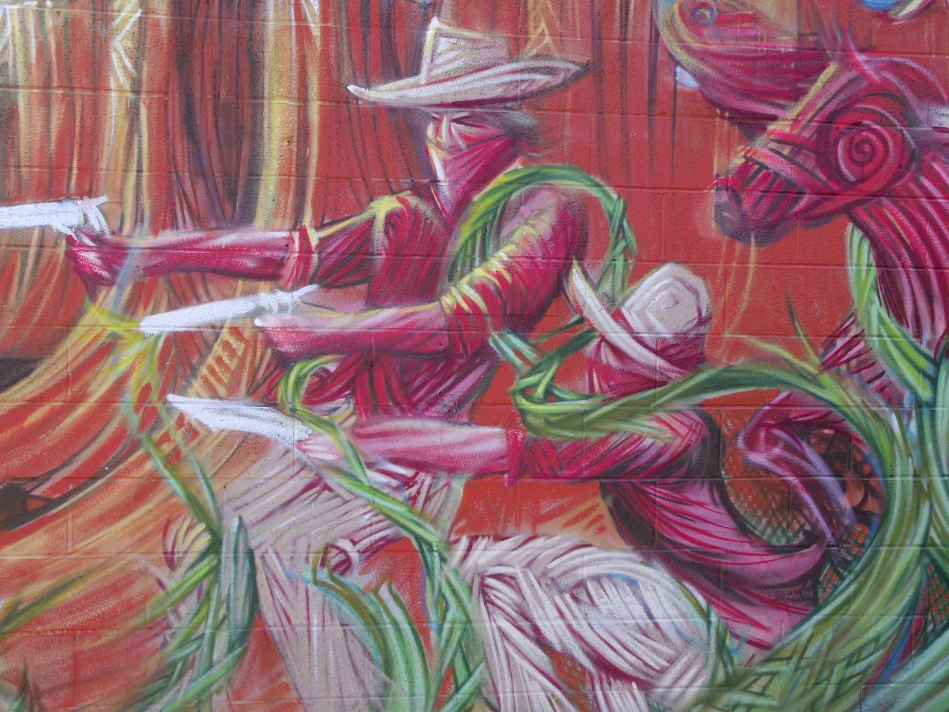 Gerry said that the cowboys weren’t in full control of their horses and are off balanced and not shooting straight, one cowboy is even on the ground wielding a bowie knife…while one of the natives isn’t even presenting a weapon…he’s in the charge, yes, but not needful of a weapon yet…so the battle isn’t as unfair as it might first appear. 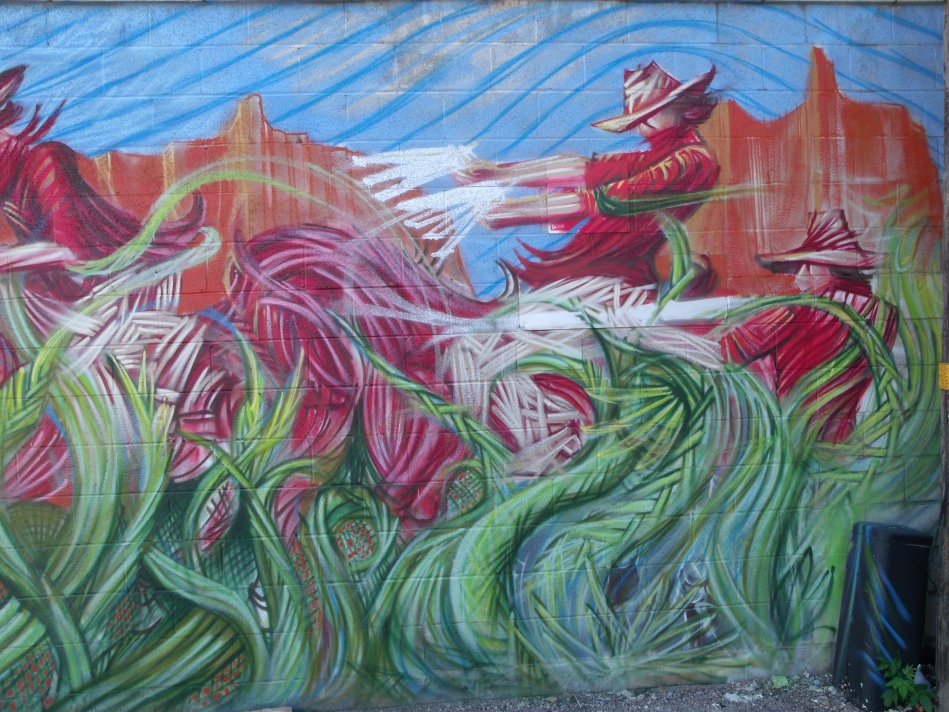 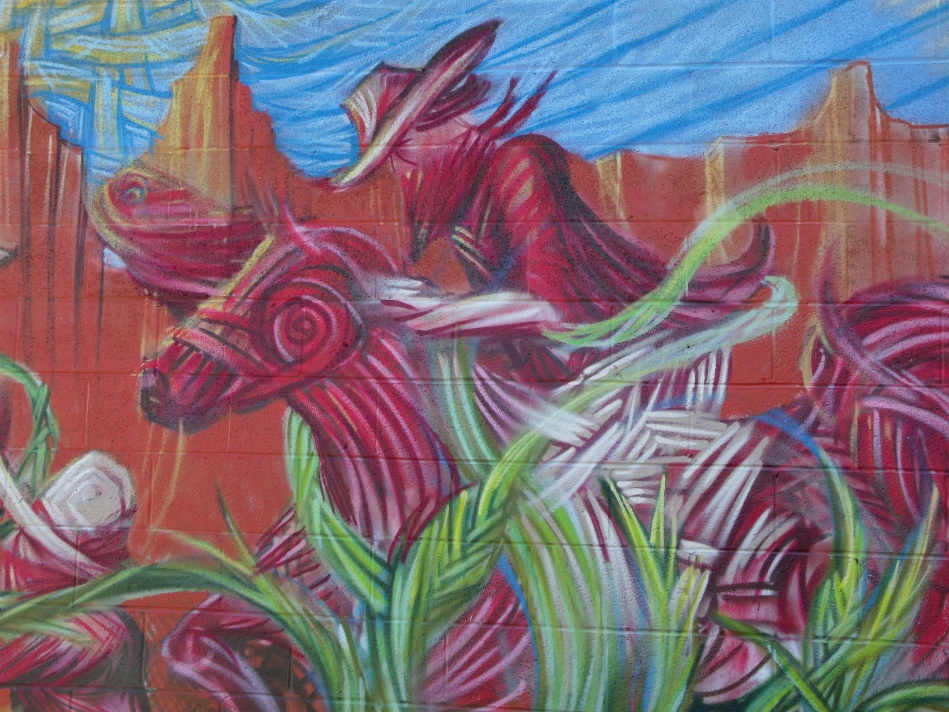 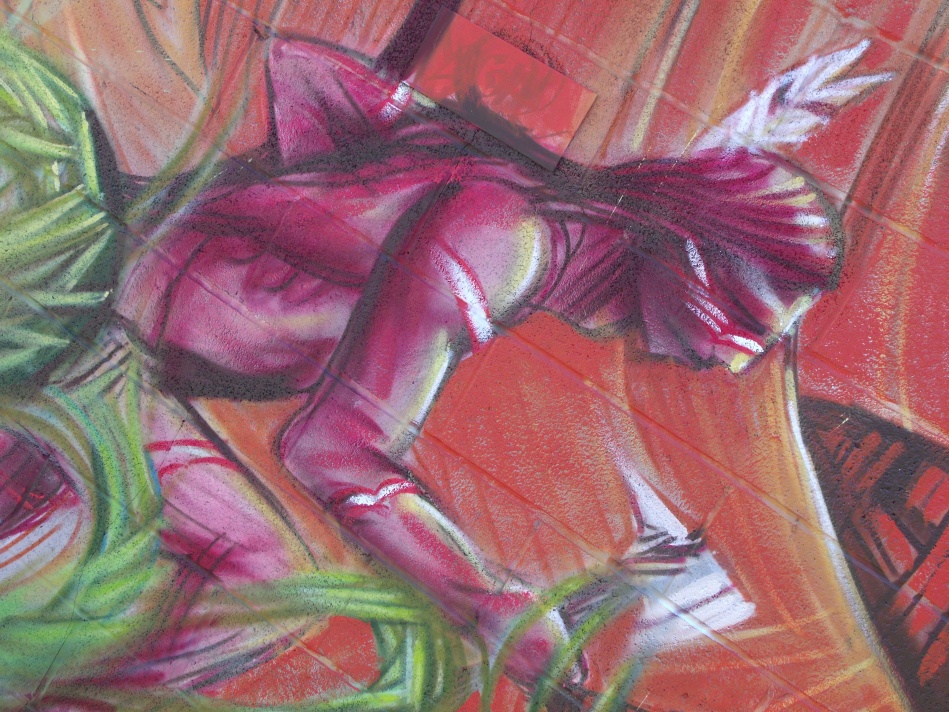 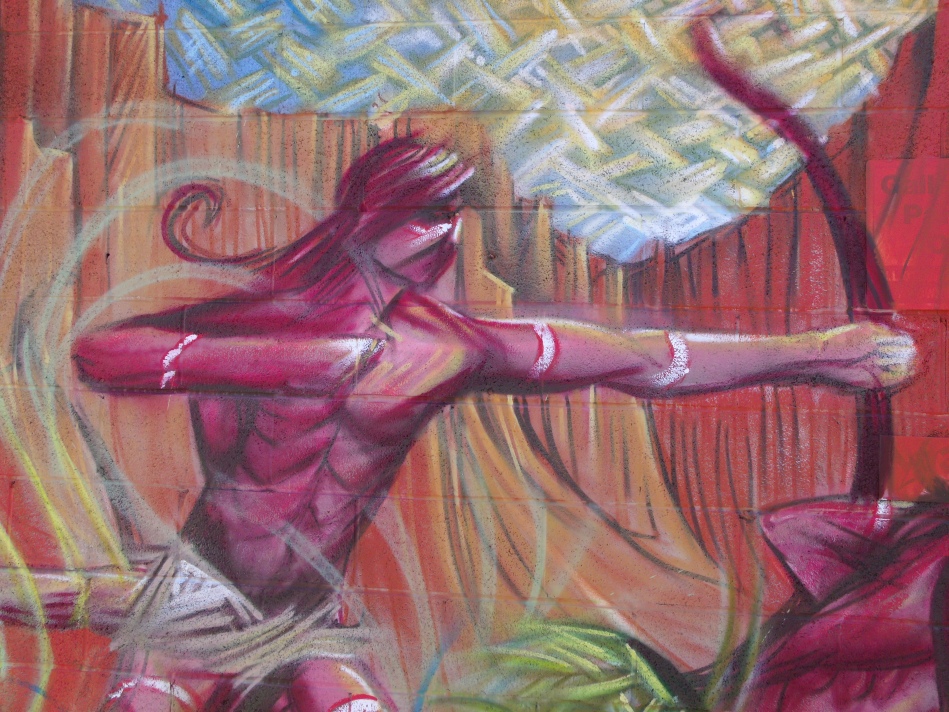 Gerry said he put bandanas over the mouths of the cowboys to protect them against the dust, whereas the natives didn’t need the same protection, as they were adapted to their environment and had stronger constitutions.  When I mentioned that some commentors on the blog thought the cowboys might have been hiding behind their masks, he said he hadn’t considered that perspective, but he likes it.  He said he loves to stand within earshot of people as they are discussing the mural (or any of his other work), so he can hear  what they think it means, and in that vein, he appreciates the comments and the thoughts that drive them. 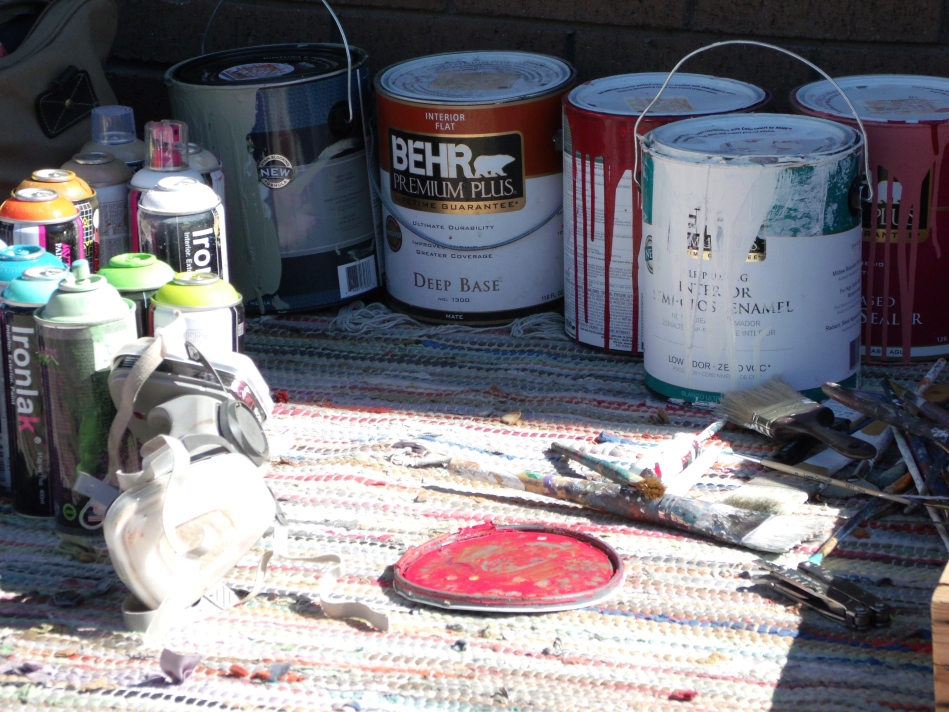 Additional “essentials” for painting a mural on a bright, sunny, spring afternoon in Salt Lake City…. 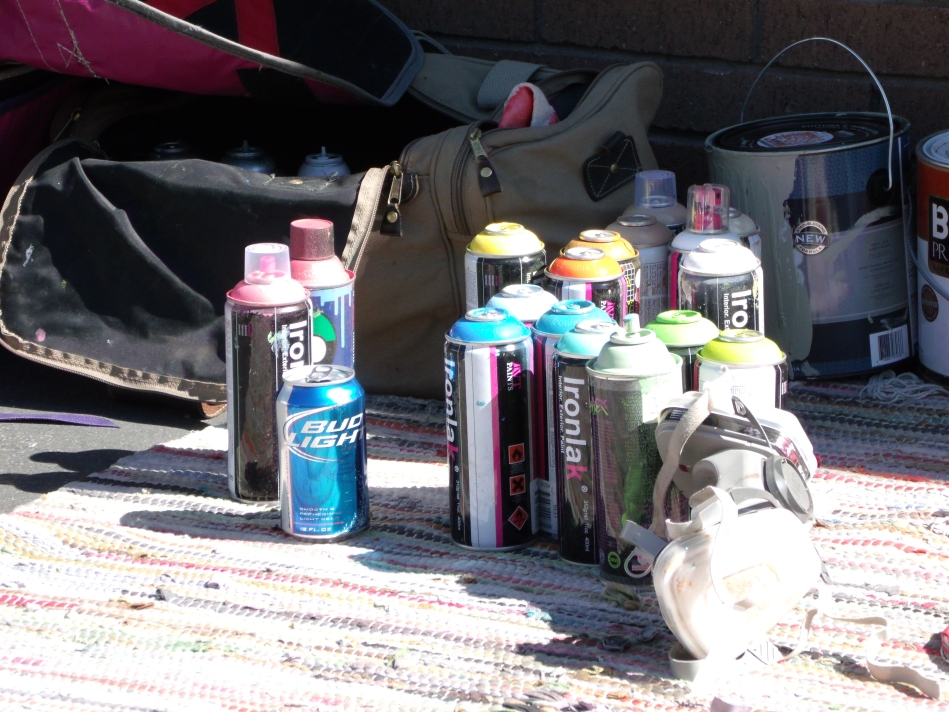 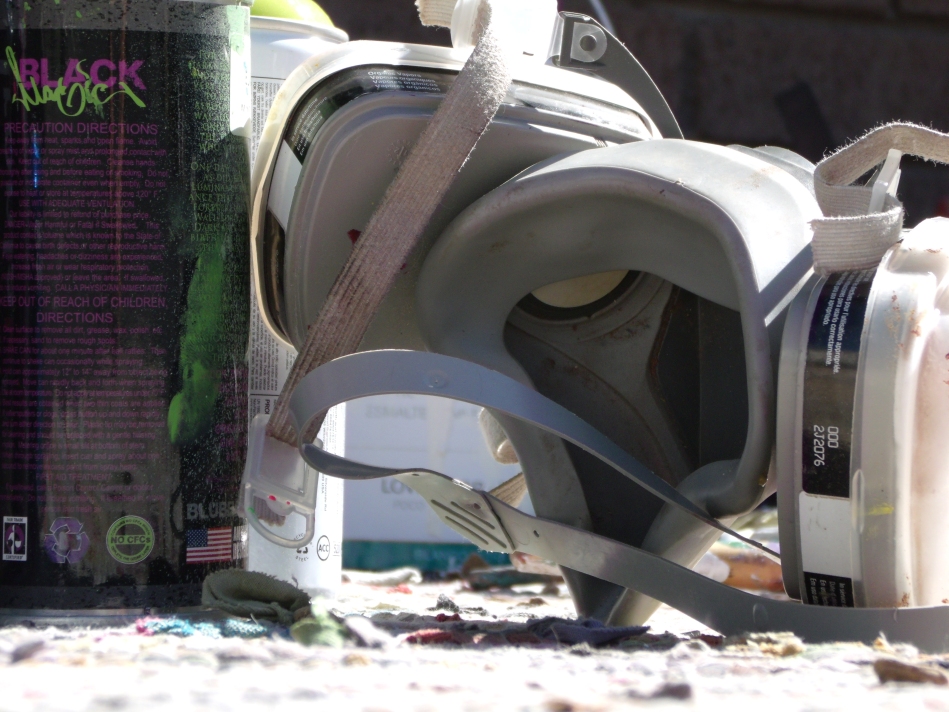 Gerry said it might be interesting to add birds or some other object to the bandanas to increase the effect, to heighten the observers’ awareness of them….  On a side note, Gerry said that he is not finished with the detail on the guns yet; I understood that there would be greater definition, but the bright silver will remain. 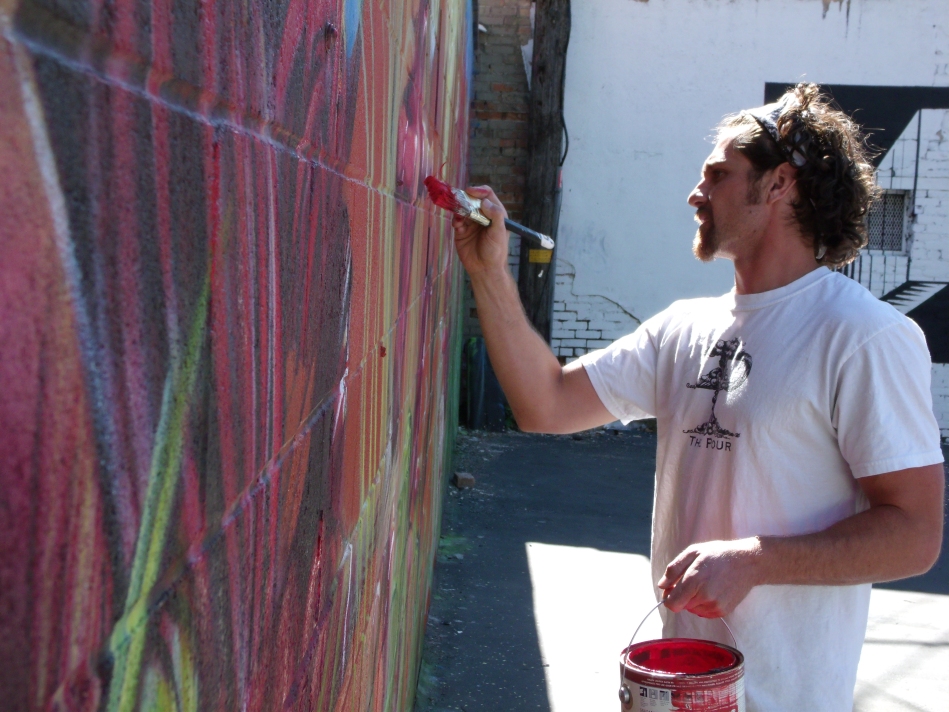 If you have been following my City Paint series for the past couple of months, and the “Becoming” series in particular, you will/might remember that I have been sharing the progress made by certain artists in creating a western mural with spray-paint.  The mural is located in the alley/parking area behind Gallenson’s Gun Shop at 166 East 200 South, in downtown Salt Lake City, Utah, USA.  To have a more complete understanding as to how the mural developed, and possibly a greater appreciation for the completed work, I would offer that you visit the earlier posts in their numerical order to witness their progress in “becoming.”  To visit the earlier posts, just click on their highlighted names…City Paint 6.1 – Becoming, City Paint 6.2 – Progress Report on “Becoming,” and City Paint 6.3 – Another progress report on “Becoming.”  If you are interested, you can also scroll to the bottom of the page and select the “Street Art – Graffiti” category to view the complete City Paint series.

I spoke with the artist today, Gerry Swanson, and am planning to meet him this coming Sunday to capture some images of the final work…stay tuned….  You can visit his website at www.silentswanart.com. 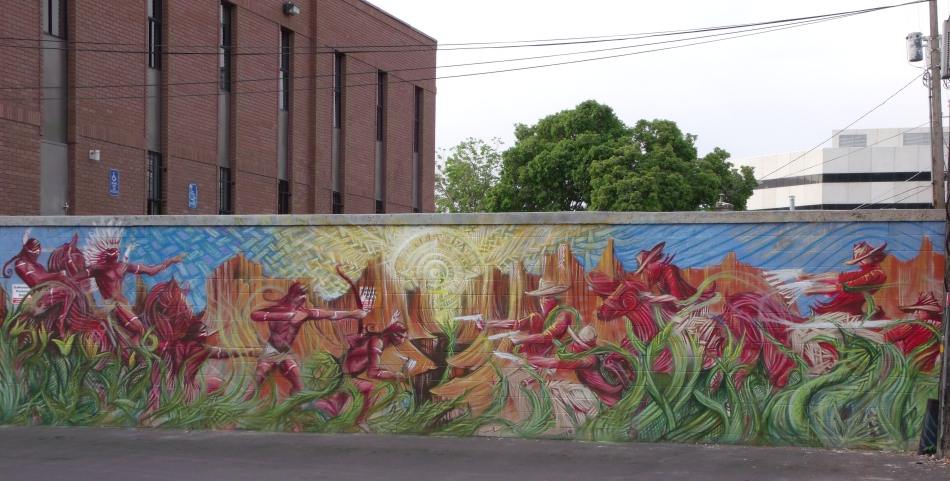 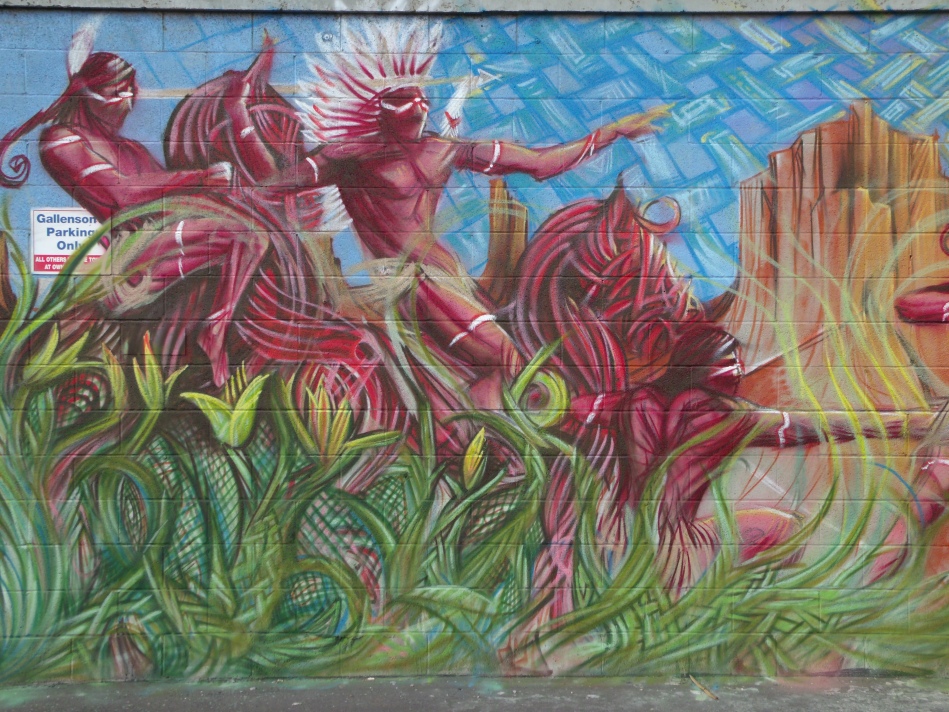 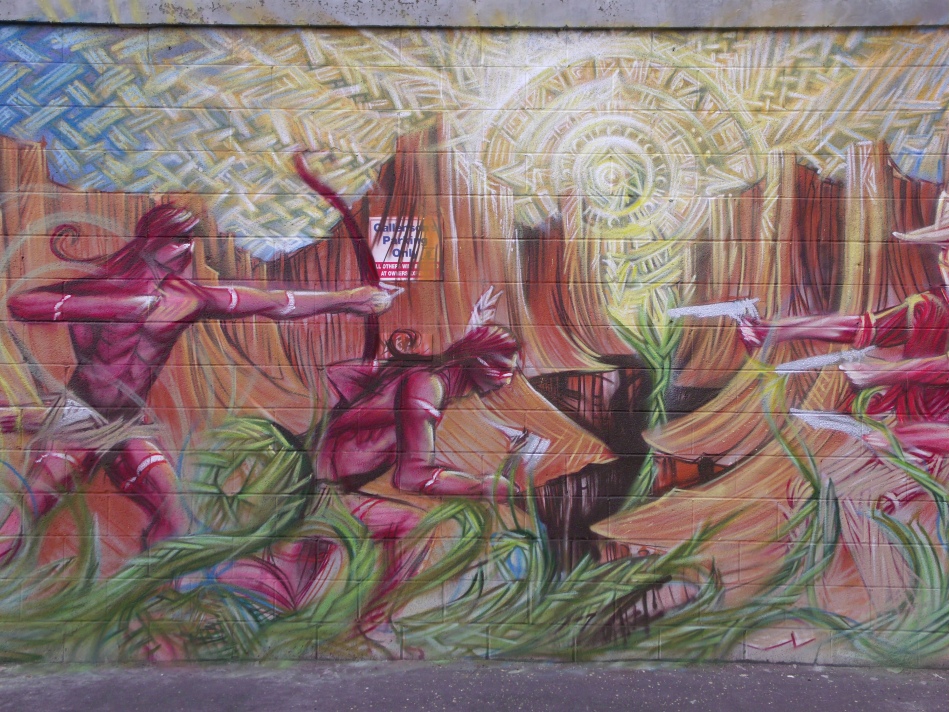 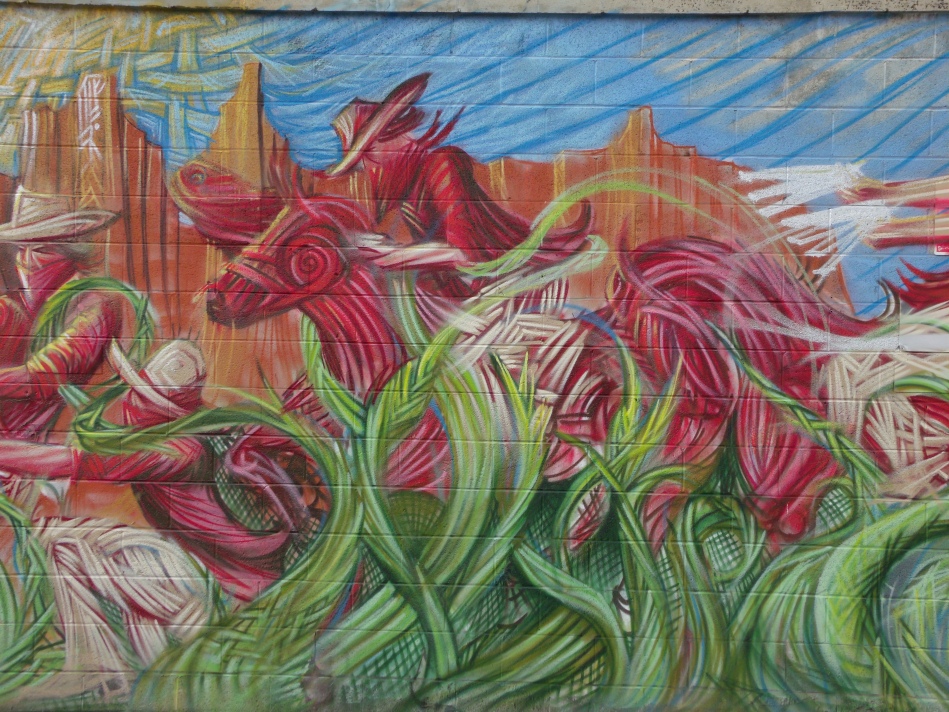 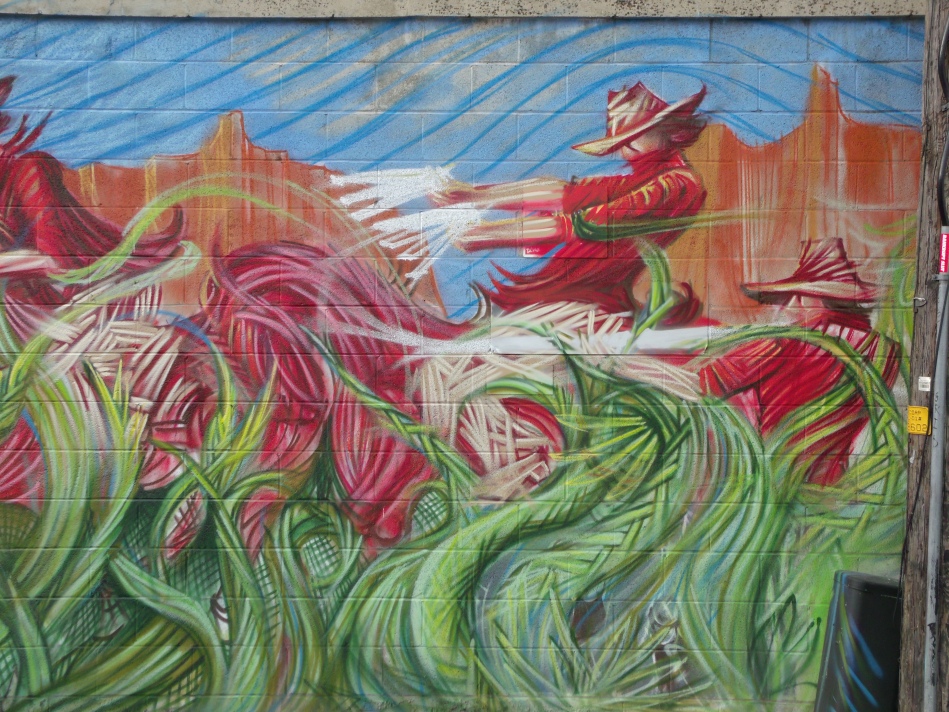 These last several shots are close-ups of different pieces of the mural, provided to show the finer details of the artists’ strokes (?) of applying the paint…. 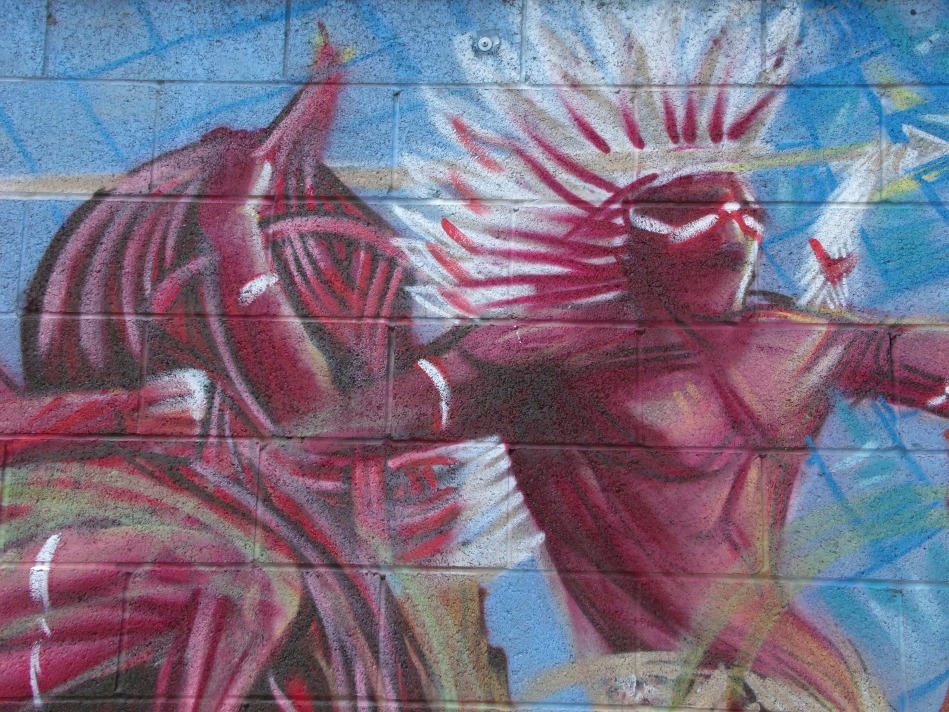 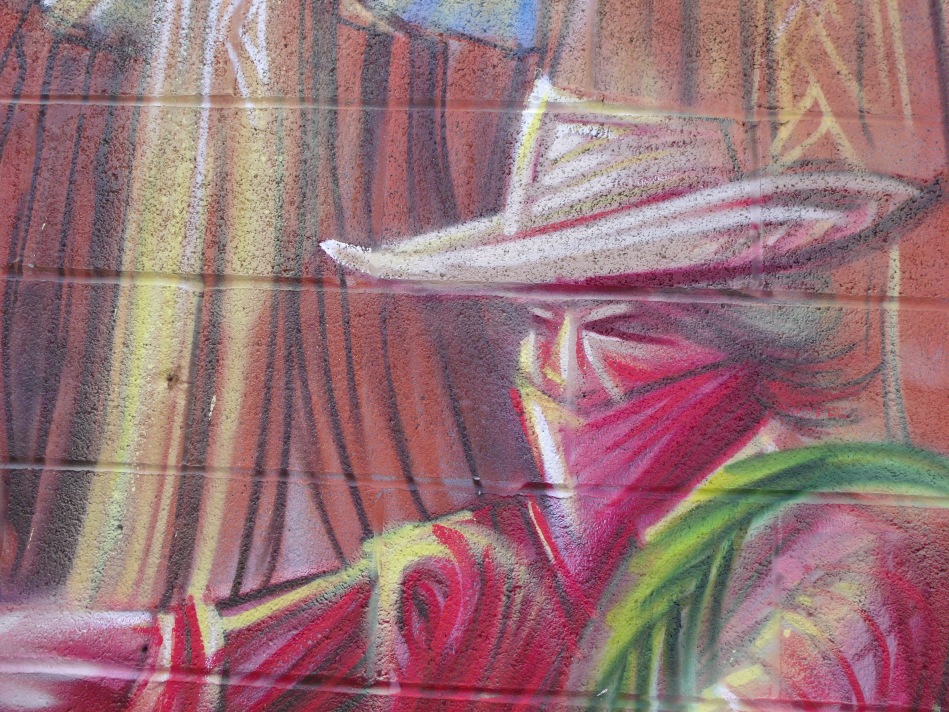 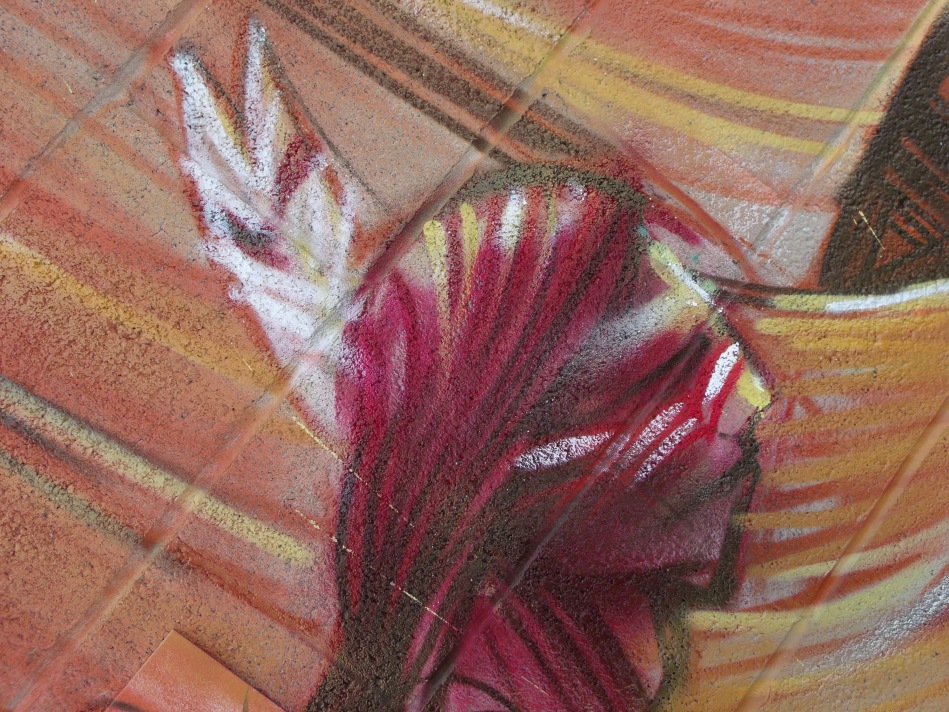 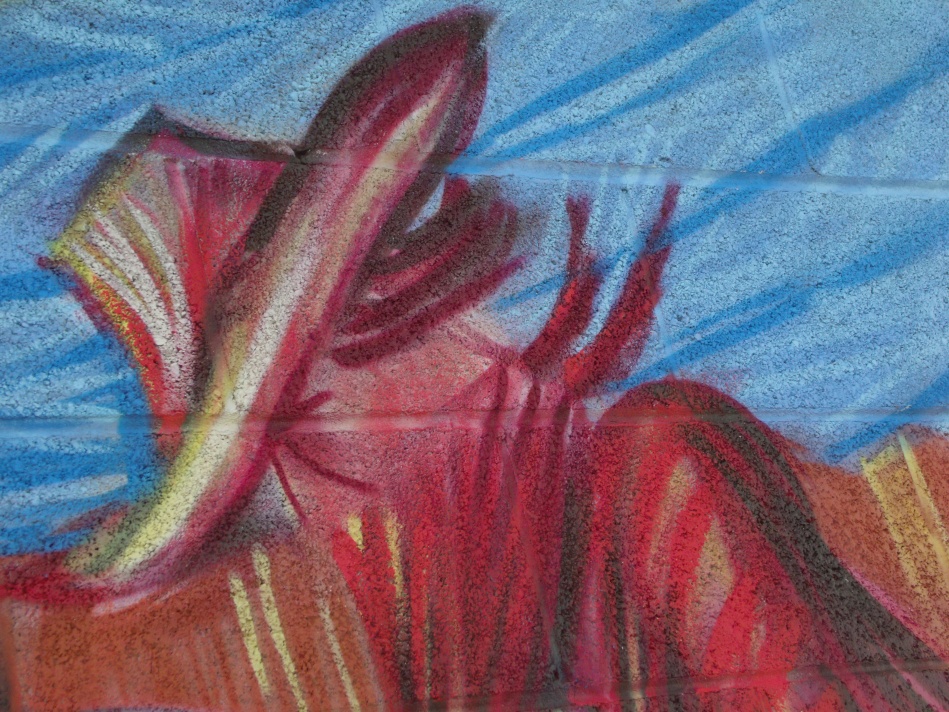 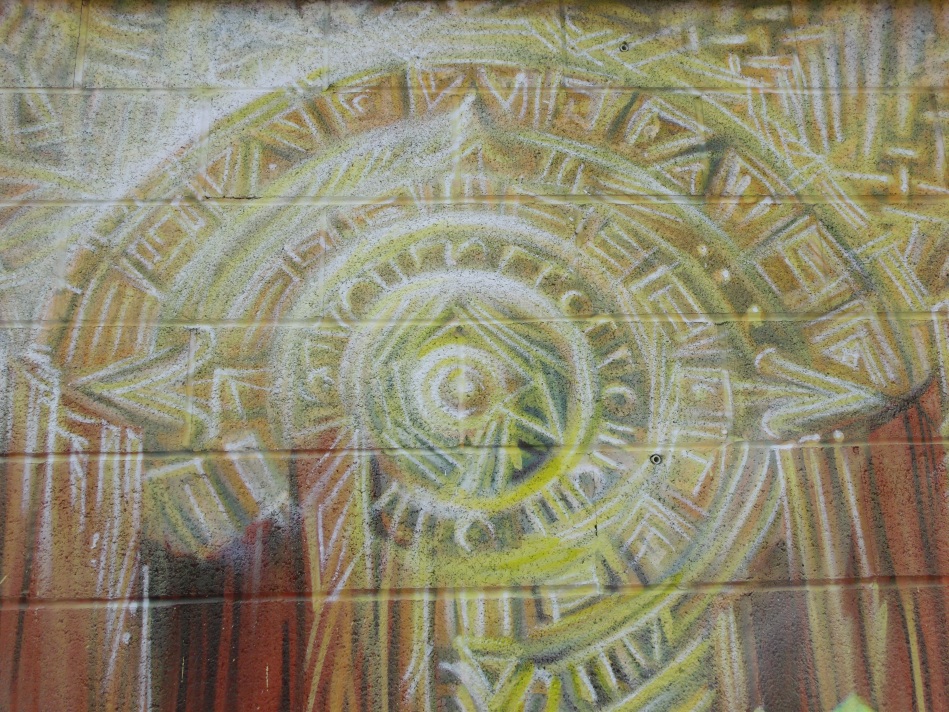 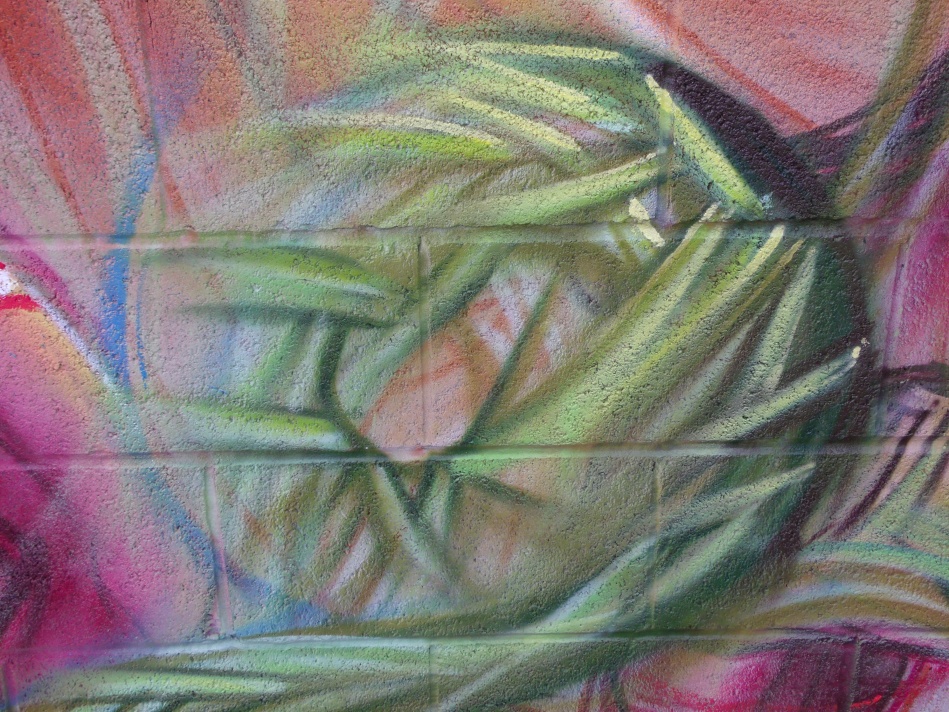 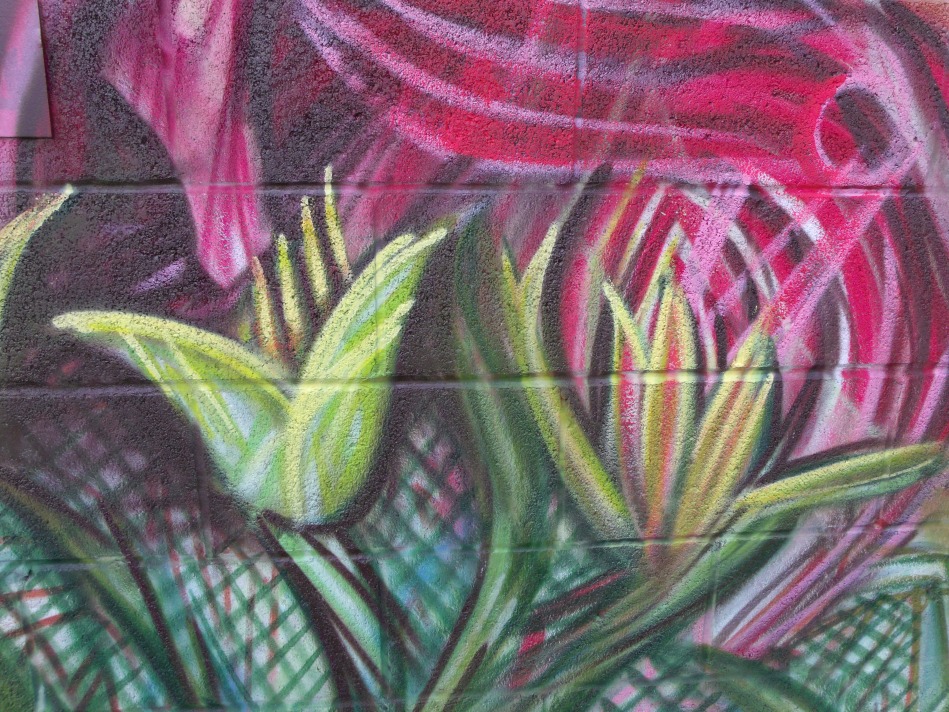 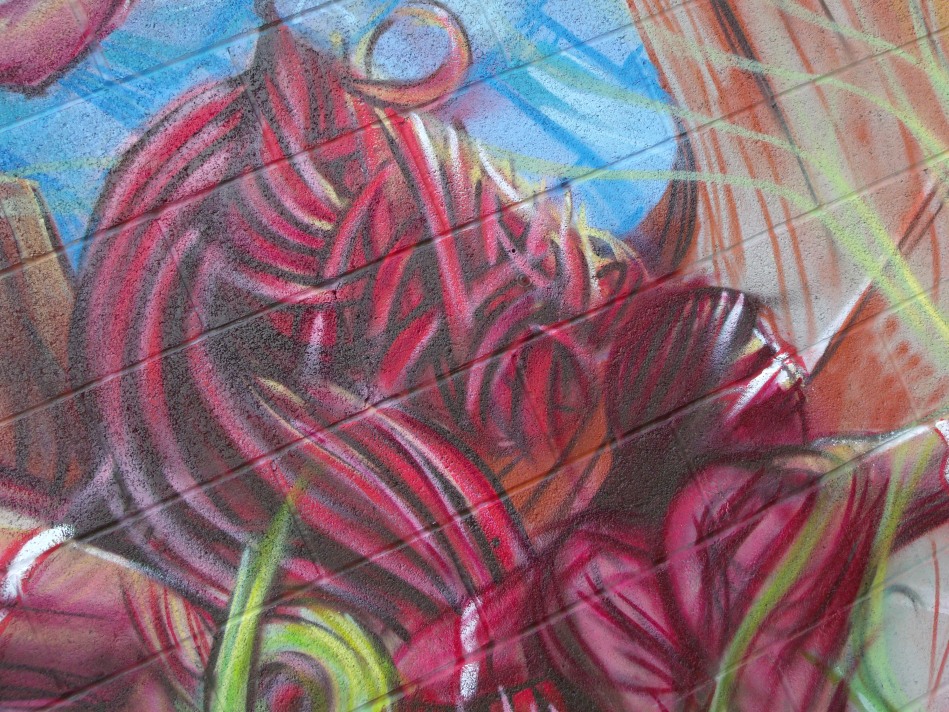