It’s been almost a full year since I drove away from the Salt Lake City area to return to my former and current home in Phoenix, Arizona.  During this year, I have longed for a return to “my mountains” and the canyons and trails that occupied so many of my weekends when I lived there….and while I haven’t actually made the drive or taken a flight to make it back up there yet, I have visited it often in my mind and through the medium of the hundreds and thousands of images that I made while I was there.

I just made a rough count of my photo library, and if it’s anywhere near correct, I went on hikes or exploratory excursions into the Wasatch Mountains at least 140 times during my 3.75 years of living in the Salt Lake area.  I forgot (I don’t know how!!) my camera on one occasion, but it was with me on the other 99.21% of those hikes.  And, of those 140 ventures into the mountains and canyons in my “back-yard,” I visited Little Cottonwood Canyon at least 27 times…sometimes hiking only the first half,  other times just the second half, sometimes hiking to a specific spot on the winter stream to capture images of the magical ice patterns and formations, and on other occasions hiking from one end to the other and then exploring further into the area beyond what was considered part of the formal trail…further away from the tracks and traces of people, into what we might consider the “wilderness,” both figuratively and literally, as certain areas of this section of the Wasatch Mountains had been designated official Wilderness Areas by the federal government. 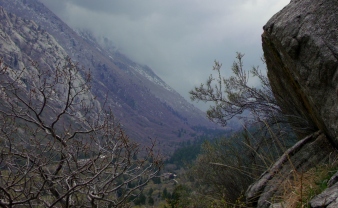 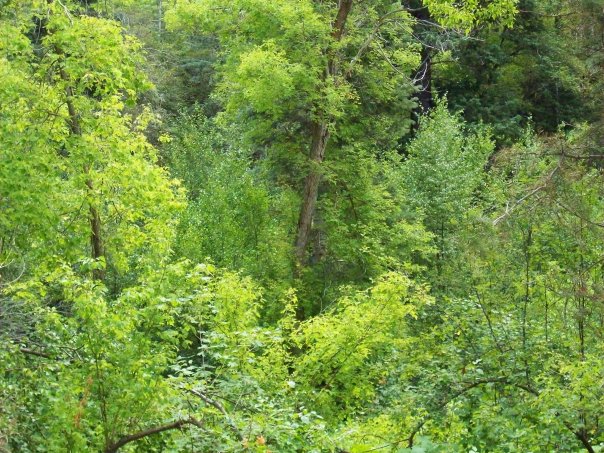 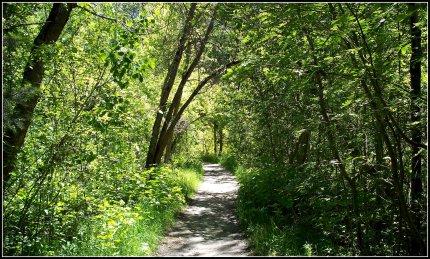 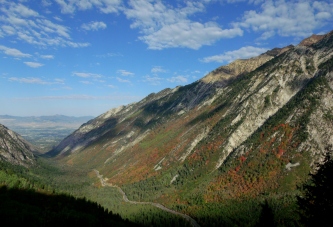 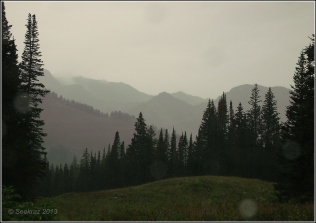 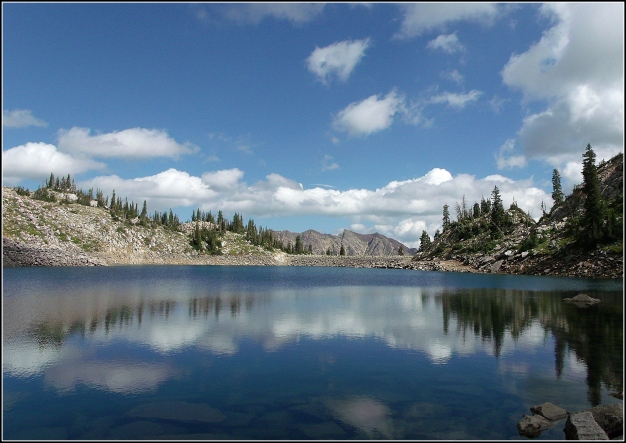 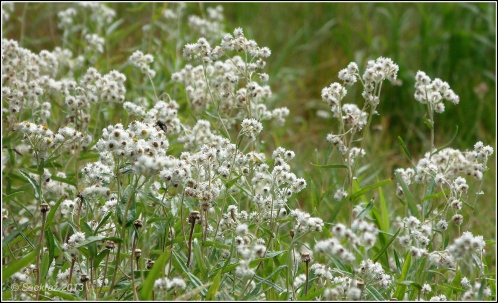 The western-most trail-head to Little Cottonwood Trail is located at the eastern-most end of the parking-lot for the Temple Quarry nature trail….and it was roughly a 15 minute drive from my home….  I visited the canyon during all seasons, as you can see from the three galleries…Spring and Summer in the first, Fall in the second, and magical Winter in the third.

Having lived in the urban desert of Arizona for more than 20 years before moving to Utah, it was amazing and wonderful to my mountain-loving soul to find myself is such an environment…every vista made my heart soar…and near every glance around made me want to capture its image for safekeeping against a day when I might not be able to view it again.  And…it was a thrill to bring those photographs back home and look at them again on the computer…and then share them with you here on the blog….so you might recognize some, or many of these images. 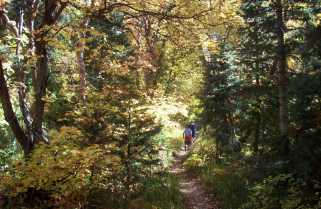 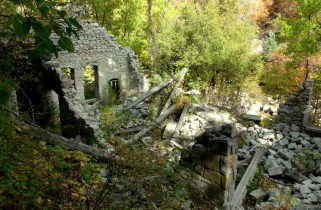 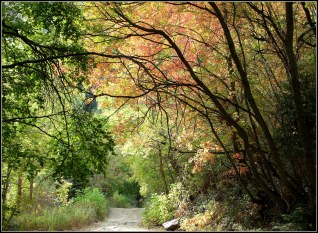 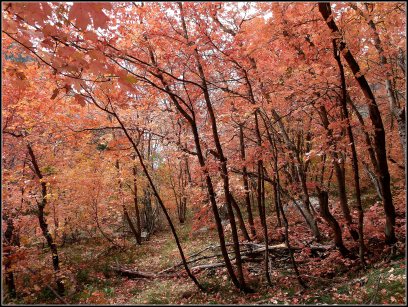 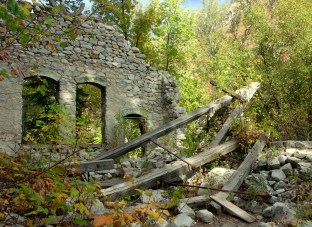 And finally, the beauty and magic of Winter in the Wasatch Mountains…Little Cottonwood Canyon viewed from afar and from very close.  While it was often incredibly cold, I enjoyed being out and in the canyon at this time of year.  It was so captivating visually, that even with freezing fingers, I stayed out there for several hours at a time, slowly walking the trail, perching precariously over the ice-cold stream, and climbing over boulders in the forest and in some portions of the winter dry stream-bed (most of the water being captured upstream to be piped into town for drinking water). 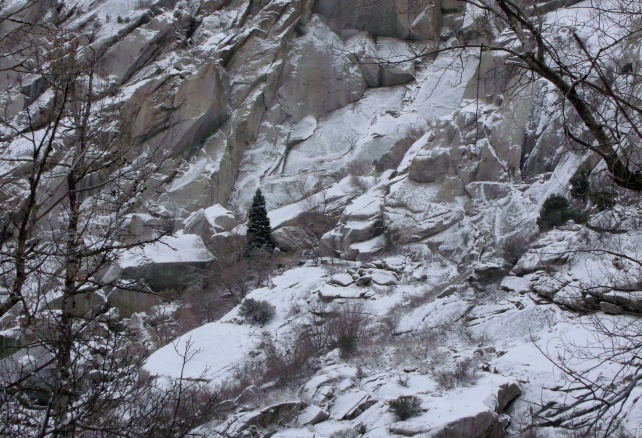 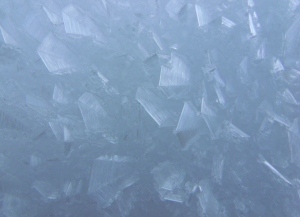 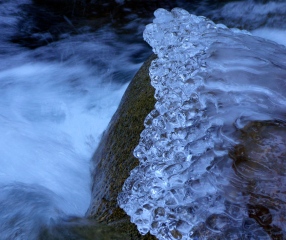 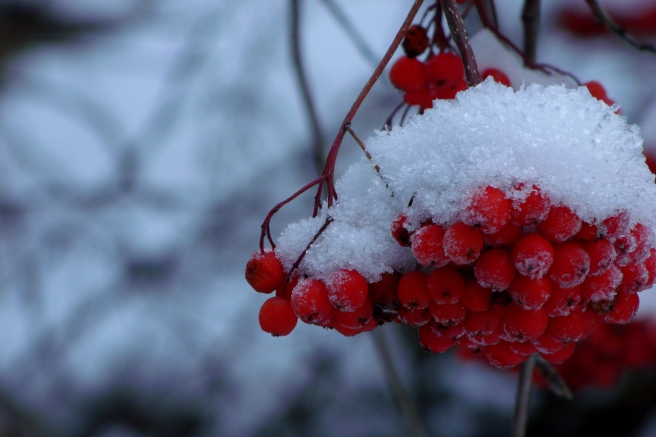 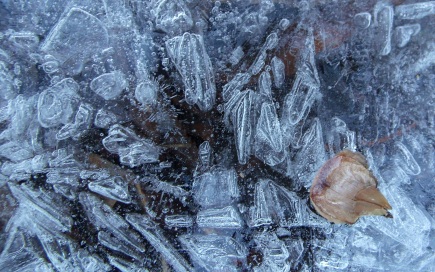 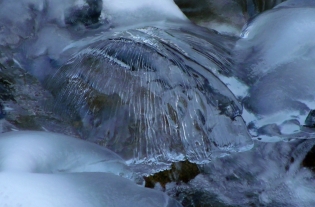 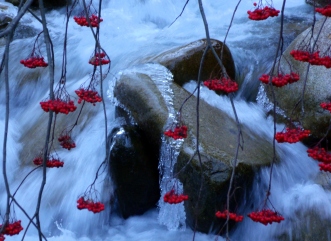 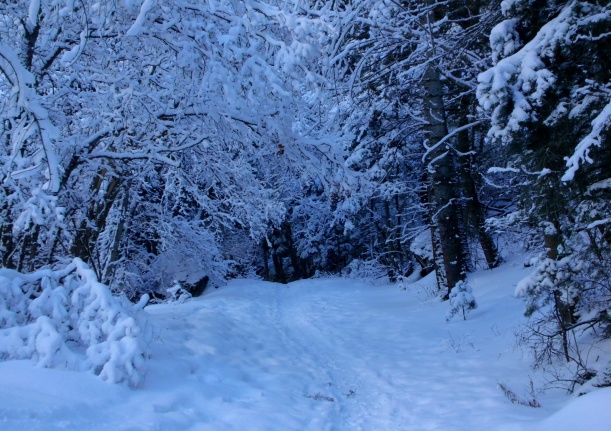 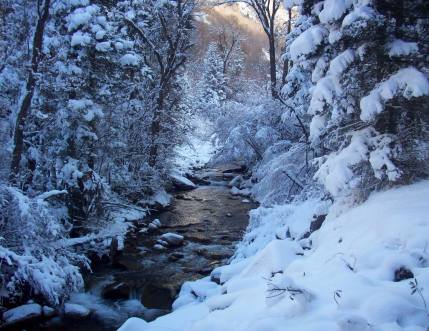 While this post is for everyone to enjoy, I brought these images together specifically for one of my dear blog friends, George Weaver, at She Kept a Parrot and The Fuzzy Foto.  Ever since George and I stumbled across each other’s blogs, shortly after I moved to Utah almost five years ago, she has been a constant blog companion, following me on hikes through the mountains and canyons, and admiring the treasures of photos that I brought home to share.  At first, she said the mountains looked fearsome, but she came to love them and looked forward to seeing them week after week.  George came to especially enjoy Little Cottonwood Canyon…and we have agreed that if we were ever to meet in the Hereafter, it was going to be on the trail in this little piece of mountain heaven.

Thank you for your encouragement and companionship, George….sending you peaceful thoughts and a warm embrace.

Those are Broads Fork Twin Peaks behind the larger tree and just to the right of the center of the image…they are the highest peaks in the portion of the Wasatch Mountains that form the eastern geographic boundary of Salt Lake City, Utah, USA. 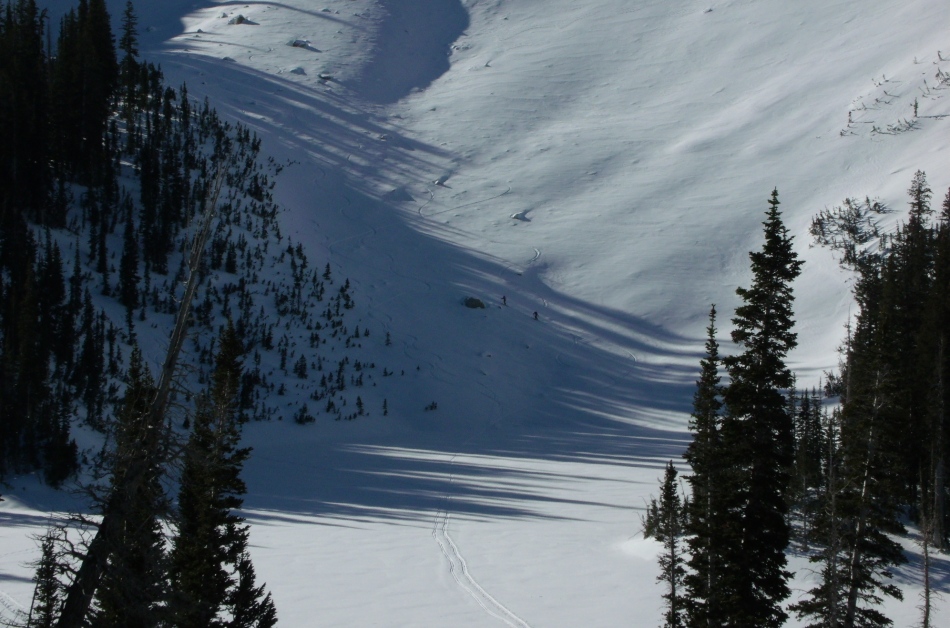 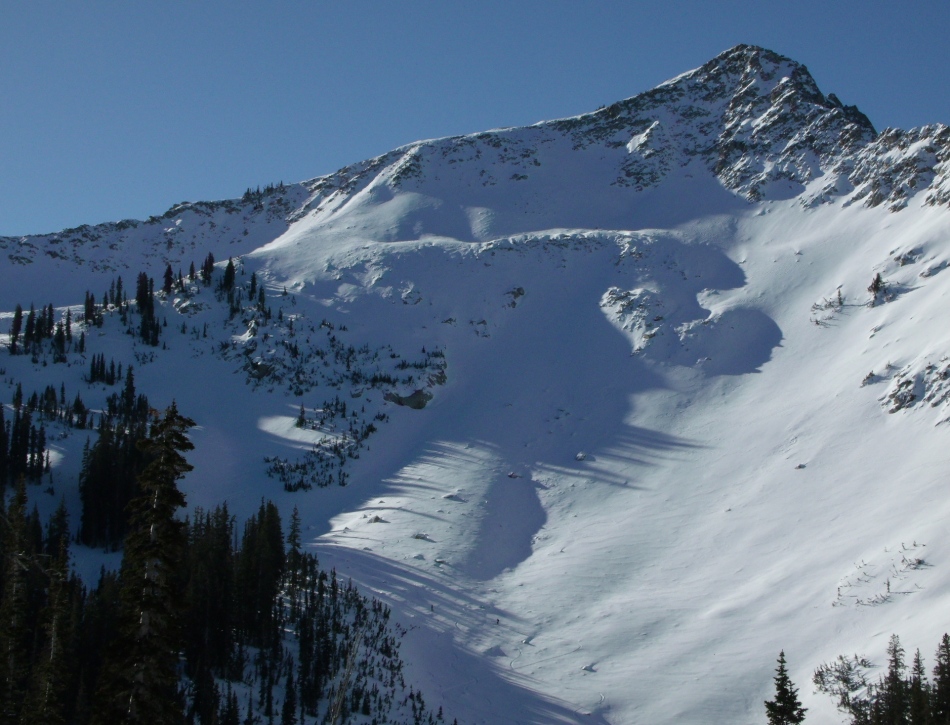 I made this photo while on the way to Red Pine Lake near the end of December, 2013.  You can click here to see a strikingly different image of the same location that I made in September, 2012.  If you cross this bridge and follow the trail to its end, you will find yourself near the three alpine lakes of Maybird Gulch.  I have only made the trip once in my three years here in the Wasatch…a short foray into the area that found me hopping unsteadily from one treacherously snow-covered boulder to another around the lower lake.  It was rather nerve wracking and I haven’t been back…but I will get there again in the warmer months when the green mountains are more suited to exploration.

If you’ve been following the blog for a while, you might remember a few posts from last year that highlighted the same lake…and if you do remember those images, you might also recall that they sky was bright in its blueness and reflected wonderfully in the surface of the lake.  It is amazing how different a place can appear when the clouds and lighting are so strikingly different.  Coincidentally, these images below were made exactly one year later than the ones in the earlier posts…to the day.

If you’d like to visit those earlier images, you can scroll to the bottom of the page and click on the Red Pine Lake category to be taken to a continuous roll of the earlier posts and photographs. 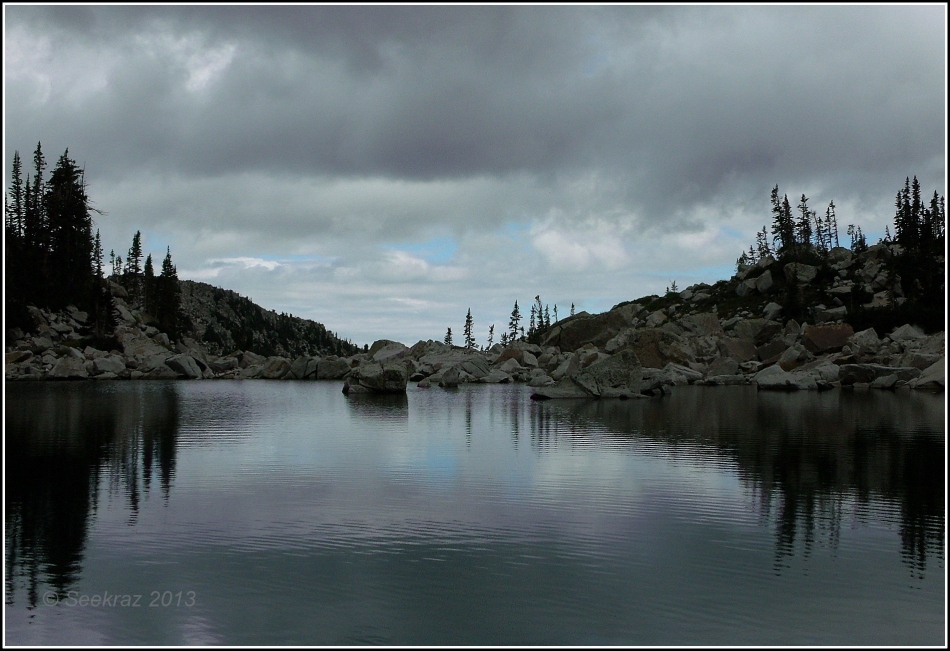 And for those of you who are interested, Upper Red Pine Lake is at about 10,000 feet in elevation…400 feet higher than Red Pine Lake.  The lakes are situated in Red Pine Canyon, one of the tributary canyons or forks that extend south from Little Cottonwood Canyon…just south and east of Salt Lake City, Utah, USA…in the Lone Peak Wilderness Area of the Wasatch National Forest.  The hike from the trail-head to the upper lake is approximately four miles in length, has an elevation gain of about 2,500 feet, and may take you from 2.5 to 3.5 hours to accomplish…depending on your fitness level……….and how often you stop to make photographs….

You might remember the other two posts on Upper Red Pine Lake…but you can visit them here and here if you’d like to refresh your memory before continuing to the images below…or afterward…or not…. 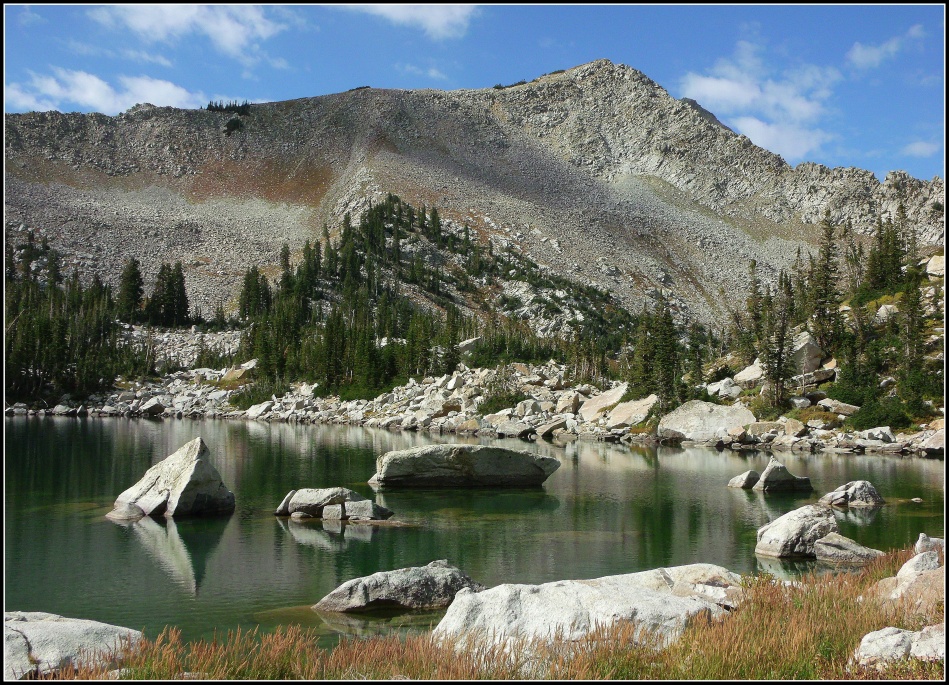 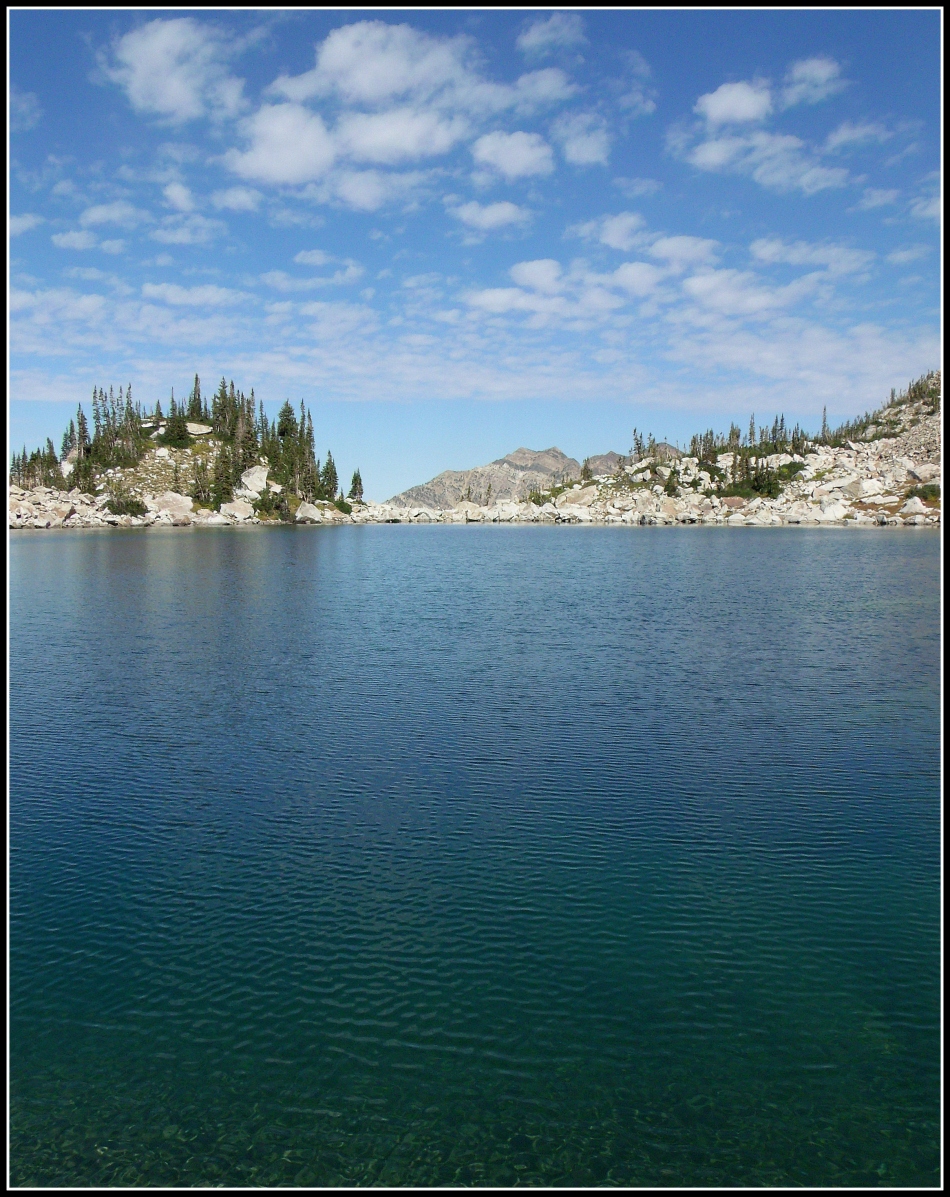 This is the drainage from the two/three lakes waaay up at the top of the trail…maybe not technically called “Red Pine Stream,” but that’s what it is, so….  I took this a couple of weeks ago when Fall was barely making its presence known in our Wasatch Mountains….