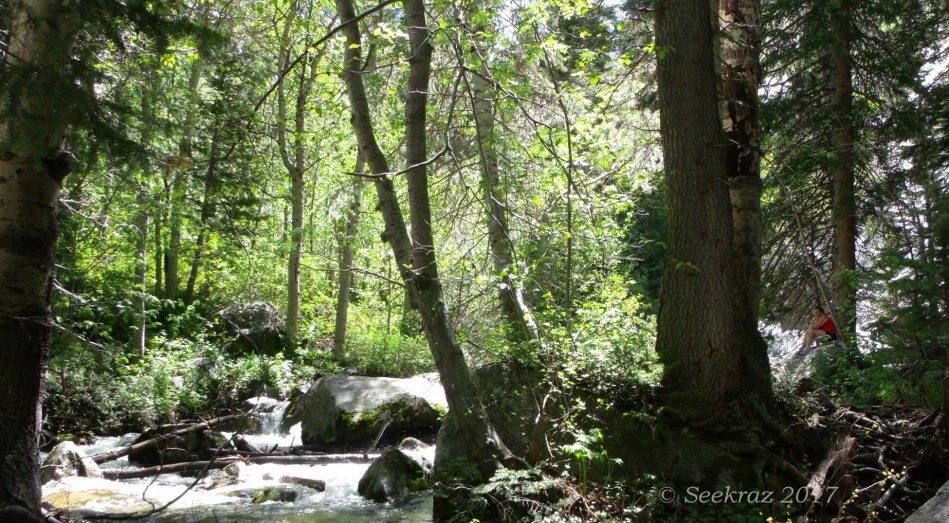 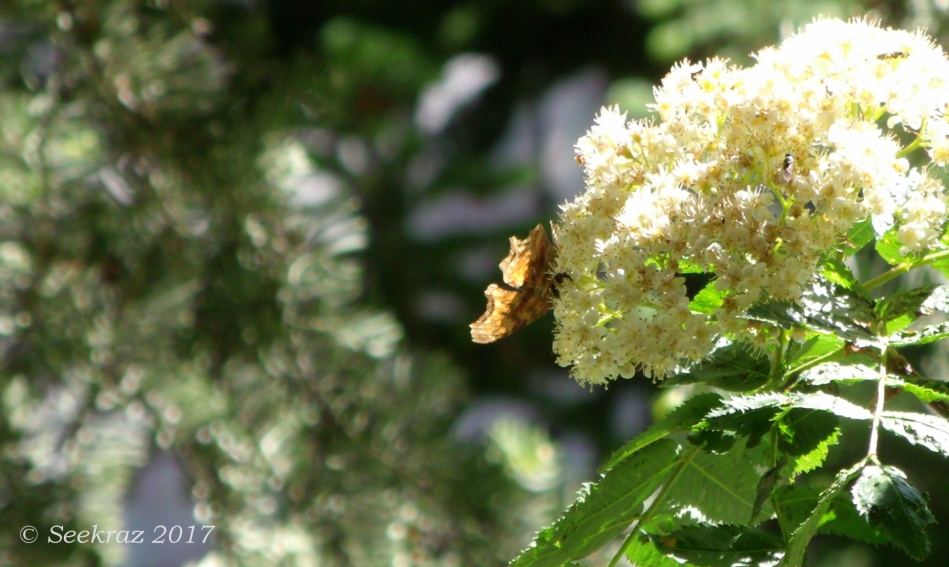 come walk with me

on a sunday morning

winter-bare aspen preparing for the cold

but we are here with the waking day

come walk with me and sing our quiet sunday song 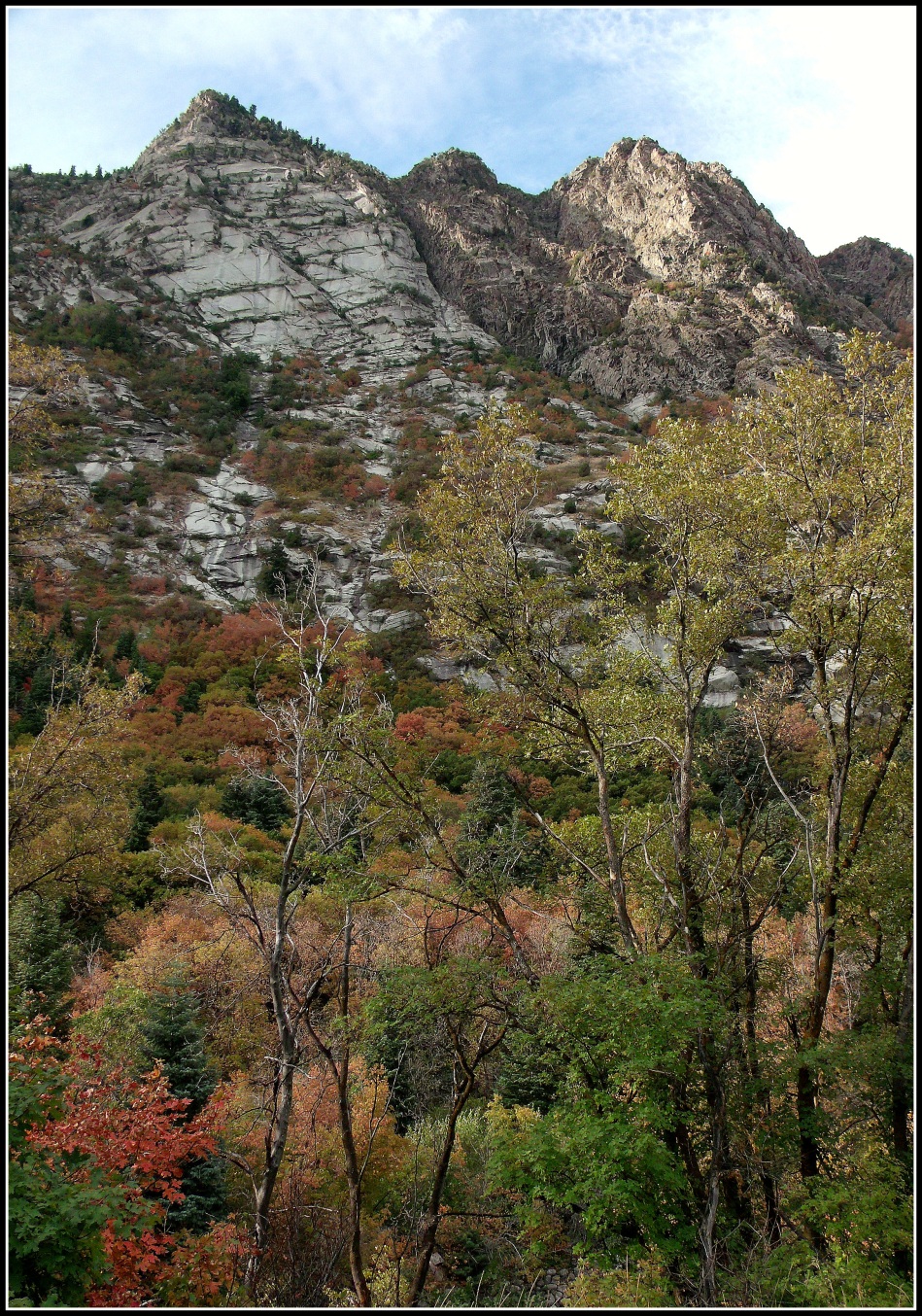 Three levels of falls down Bells Canyon Stream…along a favored trail that goes up, up, up into the mountains.  The first photograph was taken in the middle of June, 2012….

And the second shot, with a slightly different perspective, is from near the end of August, 2012…about nine weeks later…. 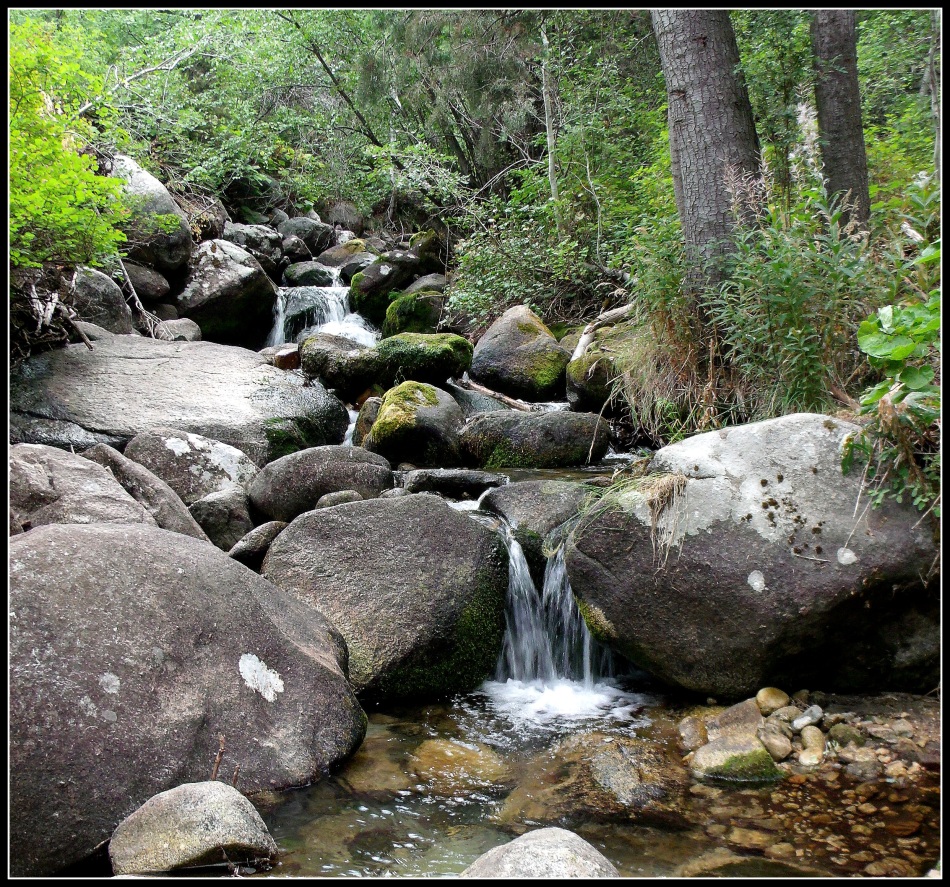 Two years and two days ago….

I sat inside the steel and glass monstrosity and watched the people walking past.  Everyone was going somewhere.  They were returning or leaving and found themselves all there, as I did, waiting or having waited.  We were dressed in our fineries, or not; we were in a hurry, or not.  Our faces held an eagerness or impatience with too little time, or we were in a set and staid complacency, as we had surrendered ourselves to wait.  Patience was no longer needed.  We just were and our time would come as it had for the rest.

I looked out through the large windows and beyond the technology that was in the foreground, beyond and beyond the miles between here/there and the object of my gaze.

A few hours earlier, I was out and among the mountains and streams, walking down earthen pathways that were wet with life and rich and gray and sandy and mulched and fine, and trees of every and sundry sort shaded my walking and allowed, too, the sun to shine on my pathway, to illuminate the great undergrowth and broad leaves and needles, nettle-like weeds of slight and fine stalk and stem and little branches and huge, fallen and leaning and upright in their rotting and decay.

Life was full and birds drifted and alighted sometimes and not, and the stream/river crashed over rocks and boulders and ran into side pools in their clean-ness, the large mess of aquamarine and clear and green and blue and white in its rushing and crashing in tons and gallons and my heart and soul wanted to stand there and stay there forever, being fed as they were with a food or nourishment so strange and beautiful and foreign to my desert-living self. 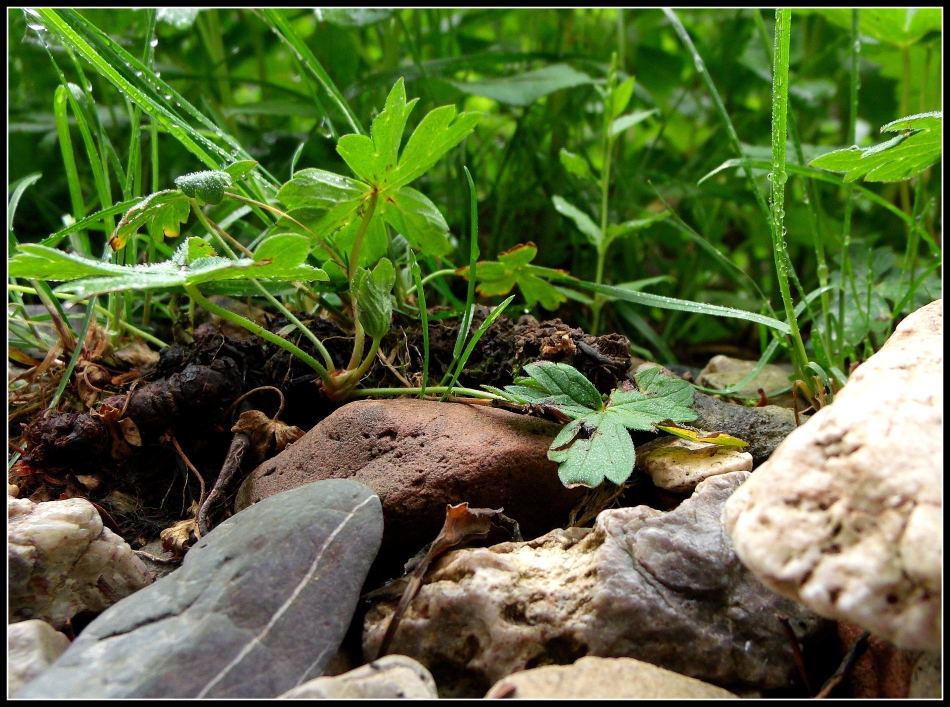 The greens were rich and lush beyond the holding of our dreams and the air was fresh with some kind of natural perfume, a fragrance wrought in the heady blooms of wildflowers and shrubs that found their anchors or homes in shaded caves and coves beneath large and tall pines and firs and oaks and cottonwoods and aspens.

I don’t know if I had ever seen streams or rivers running down the sides of mountains before that day, but I had now, or then, on that day, twice even, in their similar crevices or ravines among the rocks and tree-lined and covered mountain, a green sheet or blanket of trees covering that rich and fertile whatever with those ribbons of white and clean ice-cold foaming and bubbling tide that crashed over hundreds of yards from their beginnings in the craggy heights above.

If this land were to be my home, would all of this cause me to be happy?  Would it continue to nourish my soul when I was pressed and oppressed by life and money and the nothingness of work? 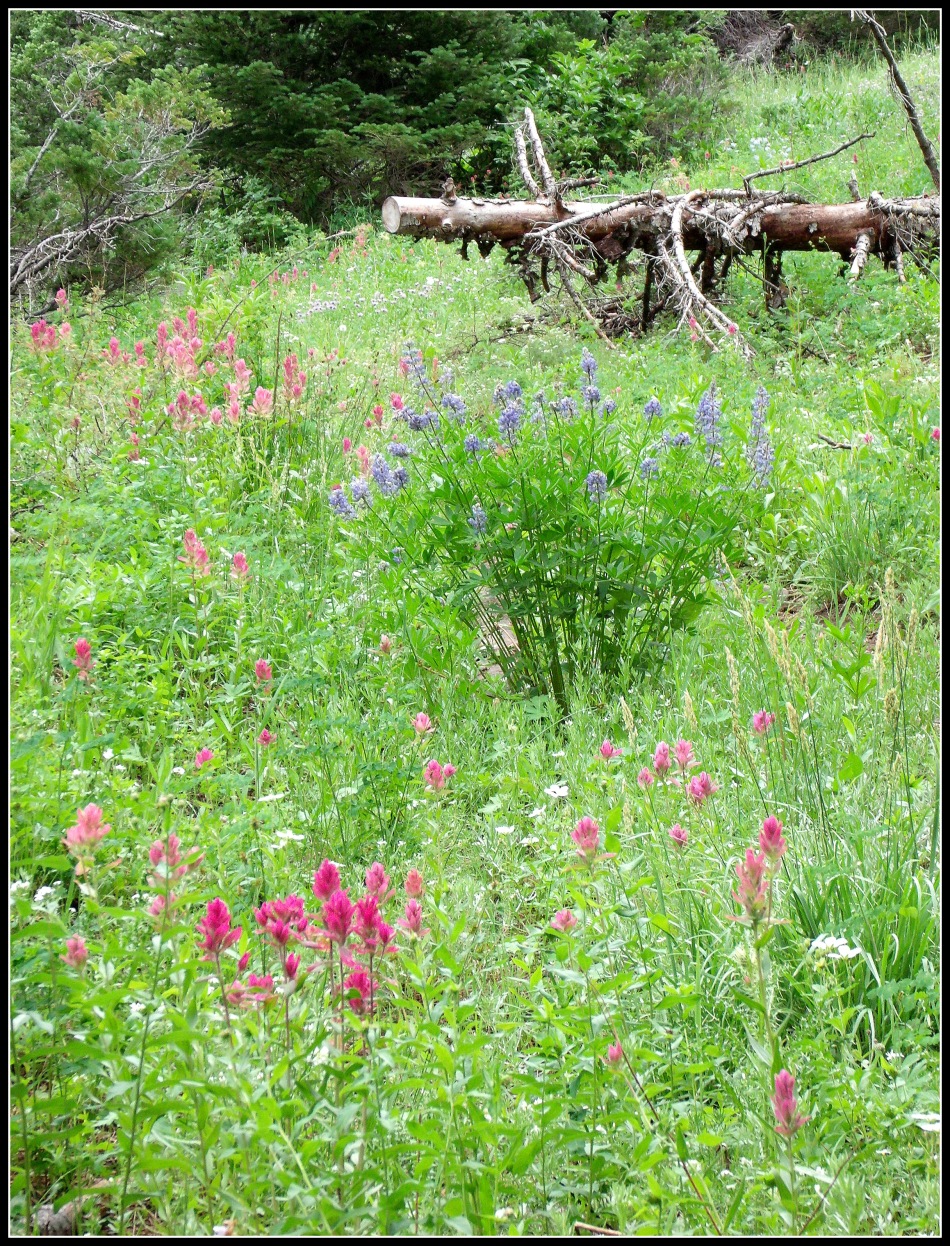 Would all of this add meaning to my temporal existence and make-up for areas that I felt were lacking?  Would I be fulfilled, or would it make me want to escape that much more?  Would its nearness make me yearn to leave hearth and home to be among the boulders and trees and rivers and deer and snakes and squirrels?

Or would they seek this hideaway from the everyday and nourish their arid souls here, too?  Would they treasure this natural sanctuary as I would and want to be in its raging stillness as I would and be so comforted in their awe and treasure it beyond words, taking refuge, as I would, in its splendor and remove?

I hope they would…. 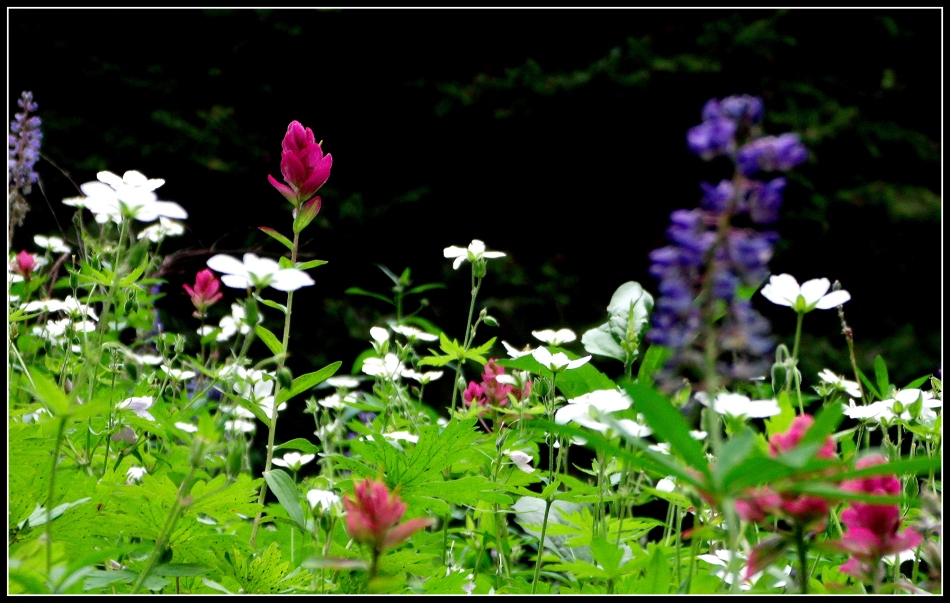 This is a Favorite Re-post from July, 2010…written after a visit to Salt Lake for a job interview in preparation for our eventual move to the area.  The words are from exactly two years ago today…and the photographs are from two days ago….  Thank you for visiting and for sharing in the natural beauty of my “new” home….

I would guess that there is some historical significance to the name, but I haven’t been able to identify it yet…but Broads Fork itself is located about four miles into Big Cottonwood Canyon, which is just south and east of Salt Lake City, and is one of the three or four main canyons that lead into the Wasatch Mountain front that is the eastern border for the Salt Lake Valley.  The trail is reported to be just over four and a half miles in length from the parking lot to the cirque, or bowl-shaped meadow at the end, and gains just over 2,000 feet in elevation.

I’m not sure of the exact length of this portion of the trail, but it starts out as something resembling a logging trail and then turns into a single track that winds through very thick brush that is often waist to shoulder high…. 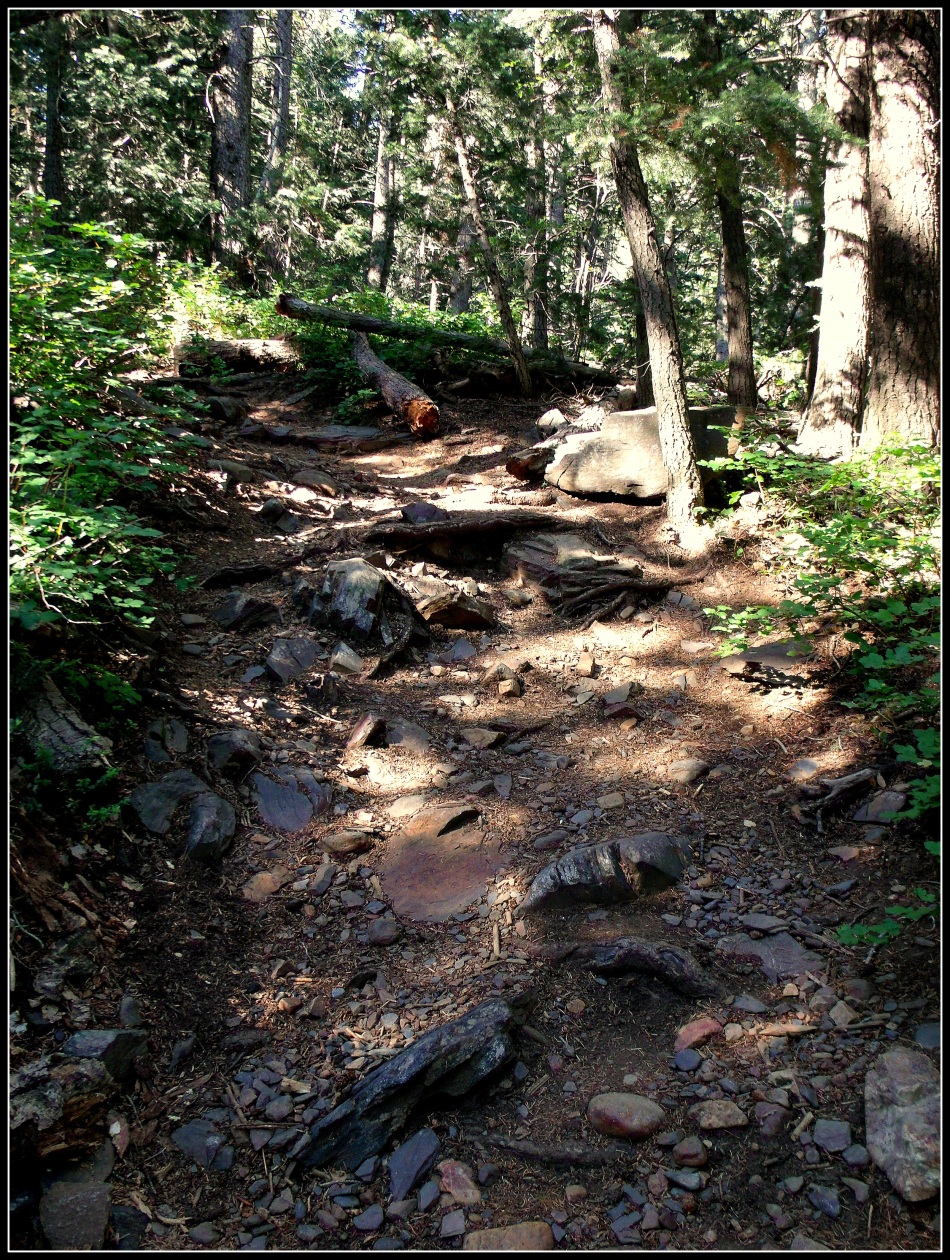 I haven’t been able to identify these flowers in any of the sources I have at hand, but they look like a variation of hops to me….

UPDATE: While I was out hiking yesterday, Sunday July 15, I met Knick Knickerbocker from the Wasatch Mountain Club and gave him one of my blog cards.  He emailed me this morning after reading this post to tell me that these flowers are called Mountain Horsemint…and the taxonomic name is something like Agastache urticifolia…if anyone wanted to know that.  Thank you again, Knick.  🙂

This was the first view of what the on-line literature calls the “lower meadow” in Broads Fork.  After climbing through old-growth pine forest and then a thick stand of aspen and the brush that I mentioned above, the trail makes a sharp turn around a rise in the terrain and this panorama is suddenly in front of you…it is so unexpected…breath-taking, jaw-dropping, however you want to describe it.

This is the view looking to the left of the above meadow….

The trail proceeds through the meadow and immediately into a stand of aspen and pines, again with the thick brush on each side…slowly climbing higher and higher as it makes its way out of this lower meadow and on toward the upper meadow.

When I’m hiking, especially when I’m on a trail for the first time, I frequently stop and turn around to take a look at the trail coming from the opposite direction…it helps with orientation on the way back if I will be taking the same route.  It’s amazing sometimes to see what’s behind you as you come out of the woods, arrive at the top of a ridge, or otherwise gain a dramatically different view of your surroundings than you had only moments before….  This is the view I encountered upon leaving the thick aspen that covers the side of the bowl where the lower meadow is situated.  I stood on the rise in the trail as it makes its entry into the upper meadow and turned around…. 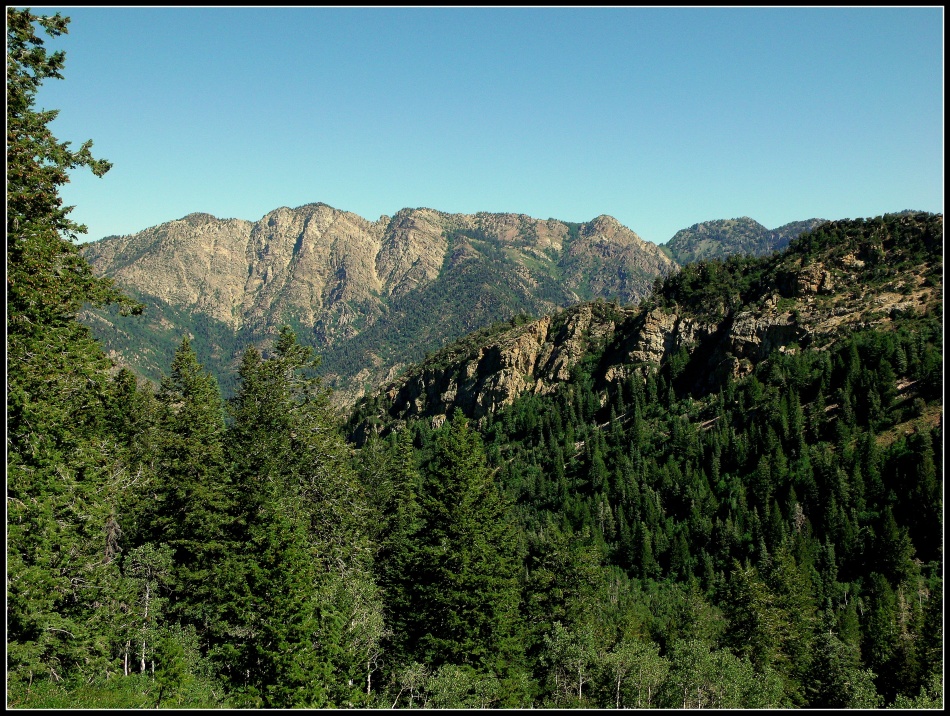 Here’s an infrequent “people picture” offered to demonstrate scale….  It’s rather difficult to feel significant or important out here…the notions of “Self” and “Me” seem to disolve somewhere between the first few steps on the trail….  This photo was taken near that rise in the trail mentioned above, but a little further down and facing into the second meadow, and with a nearly full view of the rest of the fork or gulch.

And this is a wider view that encompasses more of the area to the right of the location in the above photograph…I understand the peak in the middle to be Sunrise Peak, the one on the left to be Dromedary Peak, and the one in the upper right of the photo to be the western peak of the Twin Peaks set.  The western summit has been measured at 11,330 ft and the eastern summit at 11,328 ft in elevation.  These peaks are reported to be the tallest of the Wasatch Mountains that border Salt Lake City.

Walking the Great Western Trail from above Desolation Lake toward Guardsman Pass in the Wasatch Mountains, I happened to uncautiously look up from the steeply slanted snowbank that I was crossing and had to quickly steady myself from falling backwards as I stood upright and gazed at the strange clouds above me….

Another mile or so down the trail, I happened to look up again and off to the east beyond the mountains and found that the cloud was slowly dispersing….